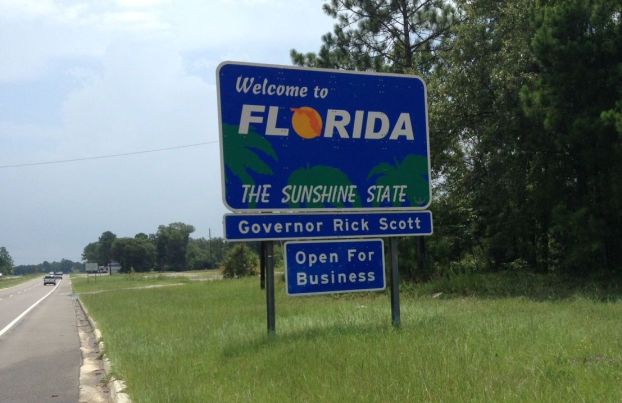 Heading into Florida, the final state of biking trip

It was easy to put the experience of yesterday behind me. The heat, headwind, and flat tire made the day a lot harder than what I had envisioned. Thanks again to Kenny Roberts and family for speeding the recovery from the tire and nail encounter.
A new day dawned with another adventure in store, so off I went about 6:30 a.m,, just as soon as there was enough light for others to see me. Today, my route was the easiest yet with virtually the whole day spent on Highways 301 and 23 as I left Jesup, Ga., and headed for Florida.
I left town and found an almost deserted first 20 miles on a newly paved road, complete with shoulders. At Nahunta, the pavement was not new but still very good with decent shoulders. Nahunta is another of the Georgia towns with lots of convenience stores catching the traffic at the junction of several roads. Today, they had girls posted at the intersection doing a charity car wash, and all the drivers were waving and blowing horns to them. It was good for a change to hear the horn used in fun.
On to Folkston, a decent size town, but one that thought 301 needed rumble strips as it headed out of town. Even that couldn’t ruin my day because traffic remained light. I knew that the Florida line was coming up and I hoped that the rumble strips would cease to exist once the line came into view.
That is exactly what happened!
Florida has a good name with cyclists, offering bike lanes almost everywhere. I crossed the line, and the bike lane started. Good start with Florida!
Another interesting thing occurred when U.S. 1 joined 301. U.S. 1 was my friend in Maine and even until I left New Jersey on a high speed road that possibly I was not supposed to be on. I will rejoin it of and on down to the Keys.
Another ride of close to 20 miles got me to Callahan, Fla., where I will spend the night after 81 total miles. It was one of the best rides yet because the heat and headwind didn’t get too bad due to intermittent clouds and a few showers.
The roadkill now has shifted back to an occasional raccoon and armadillo. Not many of either now that I am out of Georgia. Goodbye to a lot of terrible roads and logging trucks in that state.
Tomorrow, I plan to head to St. Augustine by way of A1A and several beaches, including Fernandina, American and Ponte Vedra, mixed around a stop at Amelia Island.
I think I had one of my many honeymoons there.
Just back from a trip to the Winn Dixie in Callahan. I am craving lemonade, watermelon, yogurt and bananas. A little ice cream and Wifi at McDonalds, and I am set. Tomorrow is another adventure.
Rowan County resident David Freeze is cycling from Bar Harbor, Maine, to Key West, Fla. Contact him at david.freeze@ctc.net.

Heat, nail in back tire make for a tougher day in Georgia

Once again, late last night there seemed to be a good plan for today. Then this morning, I decided to... read more