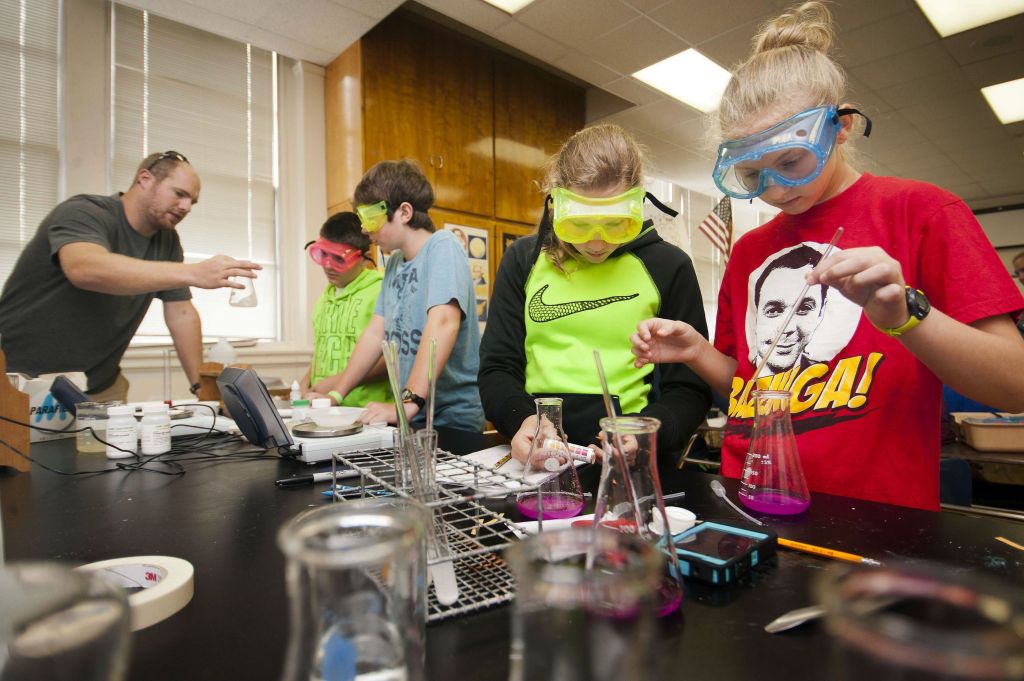 Rising sixth- through ninth- graders were busy building, experimenting, creating and learning this week at Salisbury High School’s STEM camp, which focuses on science, technology, engineering and math.
“We want the students to have an enjoyable time, but have exposure to advanced STEM concepts,” said Brian Whitson, director for the school’s STEM Academy.
Sometimes it’s impossible to consistently engage students in “hands-on and minds-on” activities during the school year, because of mandated curriculum and testing, Whitson said.
Salisbury High School has been hosting STEM camp for six or seven years, he added.
Each year, there are four weeks of camp, and students can choose up to two weeks to attend. Weeks one and four follow the same curriculum, and weeks two and three are the same.
Weeks one and four have classes in forensics, health science, physics and problem solving, while weeks two and three have chemistry one and two, engineering design, environmental science, physical science, virtual reality, pharmacology and anatomy and physiology.
STEM camp is open to all students in Rowan County, whether they attend public or private school, or are homeschooled.
Between one-quarter and one-third of attendees go to private school, Whitson said.
Many homeschoolers choose to attend “for the hands-on activities,” he added. “Sometimes they may not get as many of those.”
This year, 145 students registered, the largest group the camp has ever seen, partially due to the addition of rising sixth-graders to the mix. Classes are capped at 12 students, but most have an average of seven.
Although the camp isn’t free, it is affordable. Students only pay $25 per week they attend.
“We have community partners. That’s why we have a nominal fee,” Whitson said.
That allows all students to have the opportunity to come, he said.
Students must apply in order to attend STEM camp and adequate grades are a must.
“We’re not a babysitting service,” Whitson said, stressing that the camp is for students who want to learn and will be engaged.
Camp runs from 8 a.m. until 1 p.m., with a midmorning break and lunch, but on Thursdays, parents are encouraged to come a little early so the students can showcase what they’ve done all week.
The camp employs 12 teachers total — eight each week.
“All our teachers are certified teachers,” Whitson said.
Not all of the teachers work for the Rowan-Salisbury School System, though, he pointed out. Some teachers are former Rowan-Salisbury teachers, or work in Cabarrus or Davie counties.
Chip Cook works in Cabarrus County, but teaches pharmacology at STEM camp. Thursday, he taught his students the history of aspirin, and then they made their own out of white willow tree bark. After they finished, they were able to test their version against commercial aspirin.
Right next door, students in the chemistry one and two classes were hard at work amongst beakers, test tubes and pipettes, testing the acidity of that very same medicine.
“We’re using different chemicals and mixing it with aspirin,” said rising eighth-grader Blake Clark.
Based on the amount of acidity, the mixture should change colors, he explained.
“We’re seeing how many strops of sodium hydroxide it takes to get back to pink,” said his lab partner, Carson Bailey.
Down the hallway, the engineering and design class, composed of rising ninth-graders, tested the effects of different counterweights, lengths of string and size of balls on a medieval catapult.
Students attended STEM camp for a variety of reasons.
Simon Post, who will be a freshman at Salisbury High School, said he wanted to “get a head start in high school with some more difficult classes.”
“I just really like science,” said Cole Goodnight, who attends Gray Stone Day School.
Isaac Jeans is a rising 11th grader at Salisbury High School. Although he couldn’t return as a camper, Jeans is volunteering as a teacher’s assistant.
“I really liked the science camp when I came in eighth grade and I wanted other kids to enjoy it,” he said.
Amy Conarroe has worked STEM camp for four years, where she teaches anatomy and physiology.
Students in her class dissected a sheep’s heart this week.
“As a teacher it’s renewing to have students who want to be here,” she said.
“It’s exciting to watch them learn – to learn on their own,” Conarroe added.
STEM concepts “are useful for helping them adapt and be successful for life in the 21st century,” Whitson said.
“The content is important,” he added, but stressed that the most important part of STEM camp is that the students get to problem solve, collaborate and “remember they are creative.”
“It’s neat to watch them working together,” said Salisbury High School Principal Luke Brown.
“It’s been awesome to watch how engaged they get,” he said. “They stay very active.”