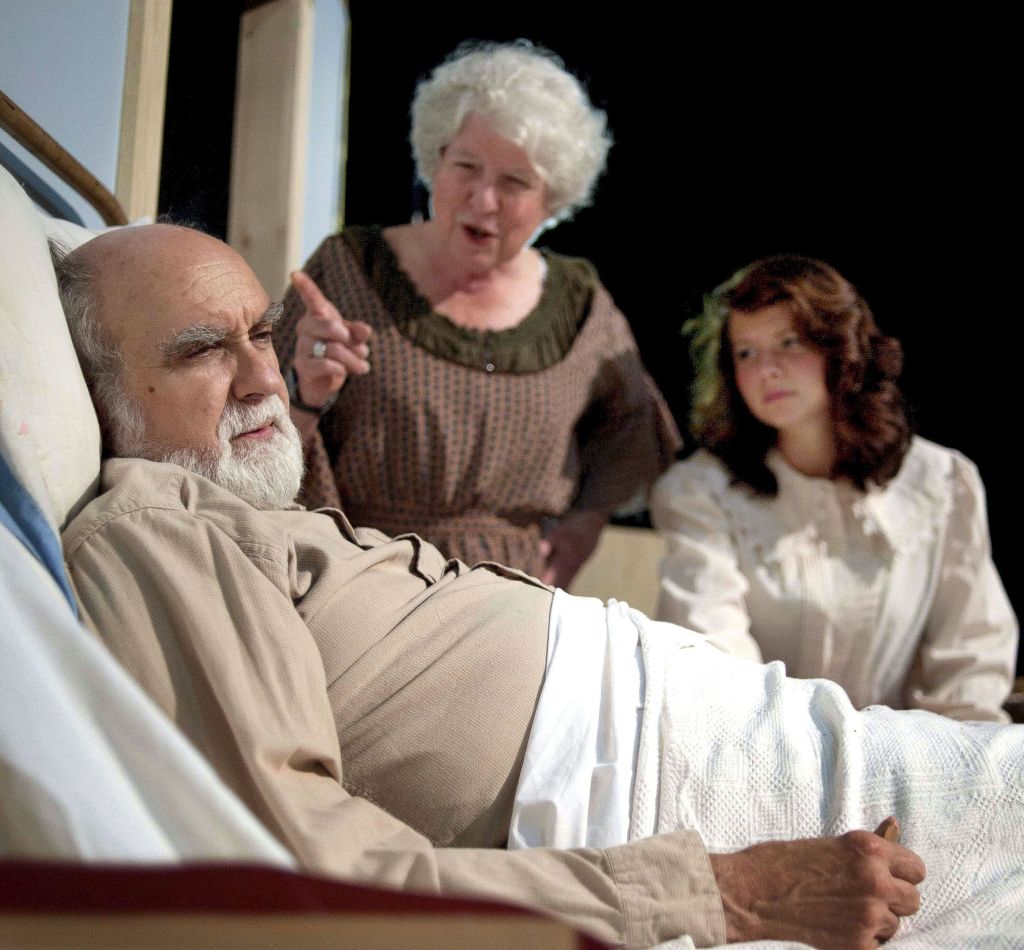 As Thomas Wolfe wrote, “You can’t go home again,” so goes the play “Look Homeward Angel.” Home is not a good place.
After seeing Piedmont Players’ production of the play based on Thomas Wolfe’s book of the same name, it’s obvious why. For Eugene Gant (the fictional version of Wolfe), home is a place full of anger and greed, strangers and leftovers, hand-me-down clothes and few chances for escape. This is Thomas Wolfe’s life laid bare.
Linda Jones does an incredible job as Eliza Gant, iron-willed wheeler-dealer, running the boarding house in what we know is Asheville. Mrs. Gant is hardly ever off the stage, and she pontificates, lies, cajoles, threatens, storms, cries and rams her way through life. Jones had to learn so many lines, create the formidable Mama Gant and keep the action moving. Applause to her for being professional and powerful.
This is her play, by all rights, but there are other outstanding performances, as well, including Philip Shore, who blusters and blows and tumbles his way into the role of W.O. Gant, the powerless patriarch of the family. W.O. finds retreat, especially into a bottle, the best way to deal with his zealot of a wife. A stone carver who makes gravestones, W.O. is in love with a marble angel carved by his teacher. Shore has to play big and small and does both with gusto.
Austin Young, with a baby’s face, is young Eugene, introverted, bookish, in love. Mama Gant wounds him again and again, as she does all her children, with neglect and indifference, until Eugene starts talking about leaving and making something else of himself.
Keaton Brower is powerful as Ben Gant, journalist and nihilist, advising Gene to get out, telling him how useless the world is. Ben is the tragic figure, already lost and heading down a road to nowhere, drinking and smoking, in love with boarder Mrs. Pert, or “Fatty” as she’s affectionately called. Shakeisha Gray is “Fatty,” and plays her as sympathetic and caring. Mama Gant hates her.
Young Savannah Deal is the right person to play boarder Laura James, the older woman Gene falls in love with. She’s mysterious and delicate, no match for Mama, and, it turns out, no match for Gene, either, who wants to marry her.
David Kolb, a Piedmont newcomer and hospice chaplain, is Dr. Maguire, tending to Ben and W.O. and knowing they are all doomed. Kolb did a very good job with Maguire’s philosophical speeches about the nature of life and what comes after it.
Director Jim Epperson assembled a worthy band of actors for this play and gets good performances out of all.
“Look Homeward Angel” is a long play, three hours, including a 20-minute intermission, yet it certainly grabs and holds your attention. The second half, much longer than the first, does not drag. It is not a play for young children, who simply won’t understand all the drama playing out on stage. But it is thought-provoking, and shows why Wolfe was such a troubled, angry man. He was treated shabbily by his mother, largely ignored by his father. Mama Gant’s boarders get the first choice in food and beds, while the rest of the family gets the leftovers, the uncomfortable rooms, the leavings.
It’s notable that an ambitious woman is portrayed so negatively. Mama Gant is an example of ambition at the expense of others. And she never understands what she has done to her family. Playwright Ketti Frings won the Pulitzer Prize for Drama for the play, and was the winner of Best American Play — 1957-58 by the New York Drama Critics’ Circle Award.
The interesting set — a sort of cutaway of the boarding house, Dixieland — was designed by Allen Jones. Clyde created the angel to which W.O. is so devoted.
Care was taken with this production, and it shows. The play continues tonight and Saturday and July 30, 31, Aug. 1 and 2 at 7:30 p.m. at the Norvell Theater, part of Piedmont Players’ annual switch. There will be a matinee at 2:30 p.m. Sunday. The production is underwritten by Edward and Susan Norvell and Salisbury Community Foundation. For tickets, call 704-633-5471 or go to www.piedmontplayers.com.