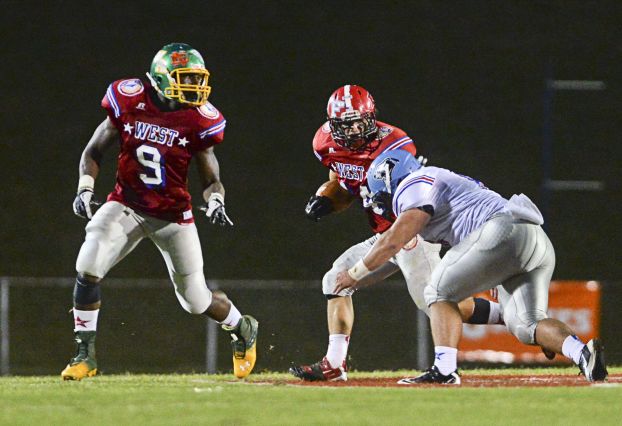 GREENSBORO — For North Rowan’s Xavier Robinson and West Rowan’s Chris Hassard, Wednesday night officially marked the end of their respective high school football careers.
And after a furious 10-point comeback in the final seven minutes of the 66th Annual East-West All-Star Game that ended at the final horn, the Rowan duo and the West All-Stars celebrated like they won the state championship.
But the last-second, 31-yard field goal by Luke Hayek (Shelby) capped an exhilarating 10-10 draw in the final exhibition contest for the state’s best prep football standouts.
“We pulled it out,” an elated West Rowan and West All-Star head coach Scott Young said afterwards. “You never want to tie, but when you’re down 10-0 with seven minutes left, you’ll take a tie.”
“The coaches always told us to keep playing hard, no matter what. And that’s what we had to do,” Robinson added.
Robinson, the 2013 Rowan County Defensive Player of the Year, put his stamp on the comeback with one of his signature hard-nosed hits that helped propel North into the third round of the state playoffs last season.
The St. Augustine commit stood up the game’s offensive MVP Diquon Cox (Richmond) on a short third-down run to keep the West’s slim chances alive. A.L. Brown’s Johnny Delahoussaey finished things off with a fourth-down tackle for loss to give West the ball back with 49 seconds left.
“He was trying to run through me. But I had to hold it down for my team,” he explained. “My teammates came to help me; we played as one unit.”
From there, Forestview’s Logan Bradley guided the West All-Stars down the field for the game-tying field goal as time expired and the team rushed onto the field celebrating.
“We were going to take one more shot, but we had been taking some shots all game on, and they had been unsuccessful,” Young explained. “I think we made the smart play.
“I would have hated for those kids to be in the locker room right now with an ‘L’ on that one play.”
Robinson and Hassard capped their high school careers with strong performances on the field, with each earning a start on their respective side of the ball. Robinson finished with a team-high nine tackles, while Hassard solidified the right-side of the line to help the West top the East 183-167 in total yards.
“We went to hammer-to-hammer against them and did it for the West side,” Robinson added.
Hassard said the experience of playing against the best competition in the state helped him improve as a football player and is an experience he’ll take onto UNC Pembroke in the fall.
“It’s been a great week,” Hassard explained. “I’ve really been impressed with the coaches and it’s been a great ride. It’s making me a better football player.”
“I’ll be able to take the experience of playing against everyone at your level,” he added. “There’s no slackers out here, so you really have to be on your toes.”
“Xavier and Chris are both reporting in the next couple weeks, so I think this week of football with four two-a-days will really help them get a jumpstart on their teammates,” Young chipped in. “It gives them a leg up that way. Also, they’ve been exposed to some college-style coaching this week, which will help them at the next level.
“It’s special, make no doubt about it,” he continued. “They’ll all go on and play college ball or junior college ball and have the opportunity to continue their careers. Some of them, this is their last hoorah. It’s special and I want them to have good memories from it.”
NOTES: A.L. Brown’s Kyrell Williamson and Johnny Delahoussaey also suited up for the West All-Stars, with Williamson earning one of four nods for team captain. West Rowan’s Color Guard performed the pregame ceremony.