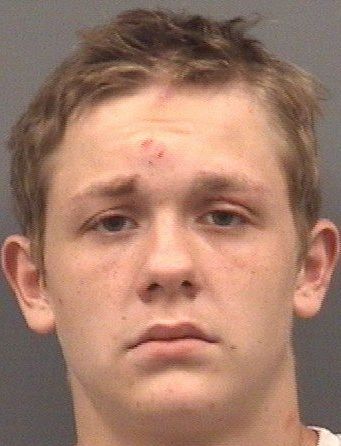 SALISBURY — The Rowan County Sheriff’s Office reported the arrest Tuesday night of Chad Hunter Seaford, 17, in the 400 block of Tree Limb Lane in Kannapolis.
Deputy D.M. Butler charged Seaford with resisting, delaying and obstructing an officer; possession of drug paraphernalia; possession of marijuana; and simple assault.
His bond was set at $15,000.
The Sheriff’s Office also reported the arrest Wednesday of an East Spencer man on three felony counts related to drugs.
Arrested was Charles Calvin Barber, 50, of the 200 block of Mitchell Street in East Spencer. He was charged with possession of a controlled substance (Schedule VI) with the intent to manufacture; possession with the intent to manufacture, sell and distribute a Schedule I controlled substance; and maintaining a dwelling and vehicle for drug-related purposes.
He was placed under $2,000 bond, with a first appearance in District Court scheduled for Thursday. Deputy C.A. Trexler made the arrest early Wednesday morning.
In other sheriff’s reports:
• Justin Michael Goodman, 20, of U.S. 52, Rockwell, was charged early Thursday morning with resisting, delaying and obstructing an officer; larceny and general misdemeanor child abuse.
He was placed under $8,500 bond, with a first appearance in court of Sept. 4.
• Michael Aaron Picard, 45, of Beverly Lane, China Grove, was charged with disorderly conduct Thursday morning and placed under $500 bond.
• David Paul Lineberry, 44, of South Jake Alexander Boulevard, was charged with using a telephone to threaten bodily harm Wednesday after a complaint was filed by a man in Archdale. Lineberry will have to appear in District Court in Asheboro Aug. 11 on the charge.
• Kimberly Jean Arrington, 26, of Suncreek Lane, was charged with larceny of a motor vehicle Wednesday and placed under $2,500 bond.
• A burglary was reported between 5 p.m. Monday and 5:03 a.m. Tuesday in the 4000 block Bringle Ferry Road.
• A fraud related to a credit card was reported Tuesday at Love’s Travel Stop on Peeler Road.
• A burglary was reported Tuesday in the 7500 block of Freeze Road, Kannapolis. It happened between 10:30 a.m. and 3:40 p.m. Tuesday.
• A woman reported she was assaulted and her car was damaged at 5:52 p.m. Tuesday in the 700 block of Eastview Road.
• A woman in the 5500 block of Wright Road, Kannapolis, reported Tuesday that another woman entered her home to take back some belongings without the homeowner’s permission.
• Rachard Courtney Hartridge, 25, was charged Tuesday with maintaining a dwelling and vehicle for controlled substances.
• Brian Kelly, 35, was charged Tuesday with assault on a female in the 200 block of Excel Drive, Kannapolis.
• Teresa Gayle Taylor, 51, was charged with breaking and entering a building in the 6900 block of Beaver Road, Kannapolis.
In Salisbury Police reports:
• Stephanie Michelle Williams, 27, of the 500 block of Deck Lane, was served some outstanding warrants Wednesday and charged with robbery with firearms and a probation violation. She was placed under $26,000 bond.
• Andre Louis Biggers Jr., 40, of the 1400 block of West Horah Street, was charged Wednesday with possession of drug paraphernalia.
• Katherine Elizabeth Glover, 25, of the 1800 block of Chantilly Lane, was charged with possession of drug paraphernalia.
• A woman reported Wednesday that someone entered her business in the 100 block of North Main Street and removed 30 morphine pills from her purse.
• A woman in the 200 block of West 11th Street reported a break-in at her residence between 3 and 6:16 a.m. Wednesday.
• A man reported being assaulted at his apartment in the 400 block of West Franklin Street between 4:41 and 4:51 p.m. Wednesday.
• A man reported the theft of a motor scooter in the 400 block of West 15th Street on Wednesday. The theft occurred between 9:30 p.m. Tuesday and 5:45 p.m. Wednesday.
• A woman reported a larceny and assault at 4:50 p.m. Tuesday in the 700 block of Wilson Road.
• A woman reported that someone shot into her residence at 9:41 p.m. Tuesday in the 700 block of East Liberty Street.