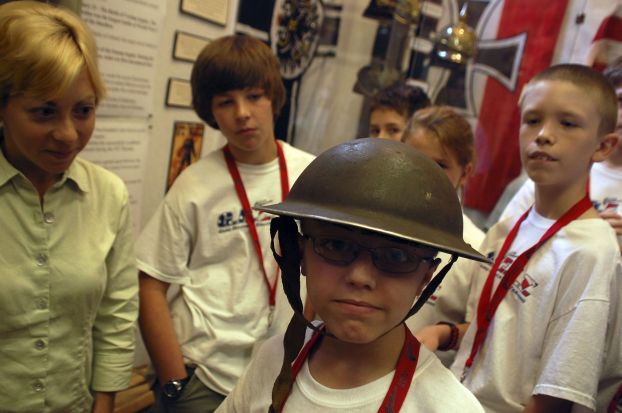 SALISBURY — When you walk into the World War I trench at Rowan Museum, sensors trip the battle sounds of explosions and gun shots.

A military voice also advises you to “keep your head down and your feet dry.”

Inside the walls of the earthen trench, with barbed wire on top, are artifacts showing the kind of things doughboys depended on — foot powder, canteens, a 1918 trench knife, gas mask, coffee and sugar, a 1916 bacon container, mess kit, trench periscope and some wartime photographs of soldiers standing knee-deep in water and the ugly trench foot that came from it.

On the walls of the trench are many quotes from real soldiers, such as Lawrence Crawford of Greensboro: “The general opinion of most American soldiers is summed up with this …” Crawford said. “France is one of the prettiest and best countries in the world — to go home from.”

Or read the words of Clarence Moose of Iredell County: “We had to step on dead soldiers to keep from going into the water and mud so deep and throwing the wounded off the stretcher.”

In our “modern” era, World War I — the war to end all wars — has been given short shrift. Blame the loss over time of all our World War I veterans. There are none left.

On the 100th anniversary of the “Great War,” it’s important to remember how it altered the way wars were fought and industrialized, how it carved out many of the Middle East countries we know today, how it made other countries realize the United States was a world power and how its ramifications, such as the Treaty of Versailles, led to the rise of Adolf Hitler and Nazi Germany.

The Rowan Museum’s impressive World War I exhibit uses photographs, quotes, text, dates, creativity and hundreds of artifacts to tell the war’s history and give a sense of a soldier’s life and what was happening back home.

“The visuals are so important in this exhibit,” Rowan Museum Executive Director Kaye Brown Hirst says, “… and we wanted to bring it to life with sound.”

Rowan Museum normally rotates in special exhibits every three months. For World War I, the museum’s board waived that policy and decided to keep the exhibit going for a year.

In the year to come, Hirst says, all of Rowan-Salisbury Schools’ third- and fourth-graders will see the exhibit during their regular field trips to the downtown.

Plenty of youthful summer campers, such as a group Tuesday morning from the Rowan County Sheriff’s Office, also have been visiting the exhibit.

Hirst thinks the exhibit provides the first time the majority of elementary school students will hear about World War I, so that’s important. But Hirst also wonders just how much students, unless they’re real history buffs, will study World War I in future school years.

The responsibility for designing and building much of the World War I exhibit fell to Terry Holt, vice president of the Rowan Museum board and chairman of exhibits.

“Terry just has this wonderful imagination,” Hirst says, adding Holt’s background as an educator gives him insights into what will register with kids and enhance their appreciation of history.

Holt thought any 100th anniversary look at World War I had to include trench warfare, and he knew the size of Rowan Museum’s special exhibit room in front was limited.

He drew out a plan on paper and used painter’s tape to map the trench’s dimensions on his living room floor.

Holt decided to make the walls of the trench 6 feet high and use Masonite as his material. He and engineering buddy Dave Harless eventually transferred the living room footprint to the garage and started building.

“The hardest thing about it was getting the dirt to stick to the Masonite,” Holt said.

Holt then decided to roughen up the Masonite with a sander and cover it with a thick porch paint. He threw on the dirt as the paint dried.

Holt and Harless built the trench in Holt’s garage, took it apart and reassembled it at the museum. Meanwhile, Holt’s son Ryan, an aerospace engineer, created all the sound effects, and electrician Roger Troutman handled the wiring.

Holt figures the museum has about $1,000 invested in the trench and its materials.

But there’s much more to the exhibit than the trench. Others helping in putting the whole thing together were Grady Hall, Jerry Brown, Alan Shuping, Luther Sowers and Elliott Mathis.

Holt says Glenn McCorkle was instrumental in the loan of several artifacts from Thyatira Presbyterian Church’s Museum, and models of World War I fighter planes came from the Charlotte Aviation Museum.

Ward provided, for example, the World War I uniform of her grandfather, Cpl. Max Willet Givans.

Sides found a connection who supplied postcard photographs of Camp Greene, which was home base during World War I to the 3rd and 4th Infantry divisions in Charlotte.

West loaned the museum a stereoscope, which allowed the viewer to see 3D scenes from World War I.

A lot of computer technology actually went into the exhibit, but kids and their parents still will enjoy things as simple as putting on a doughboy’s helmet, realizing how small and heavy it was.

And the sights and sounds of a World War I trench make a lasting impression. They did long ago for World War I doughboy Jack Marshall of Forsyth County.

“Many times,” Marshall said once, “you could pull the cloth covering your shirt buttons and see lice eggs up and down your shirt. When it really got hot, the cooties would crawl out of your shirt and onto your neck.”