Tennessee next for Rowan girls 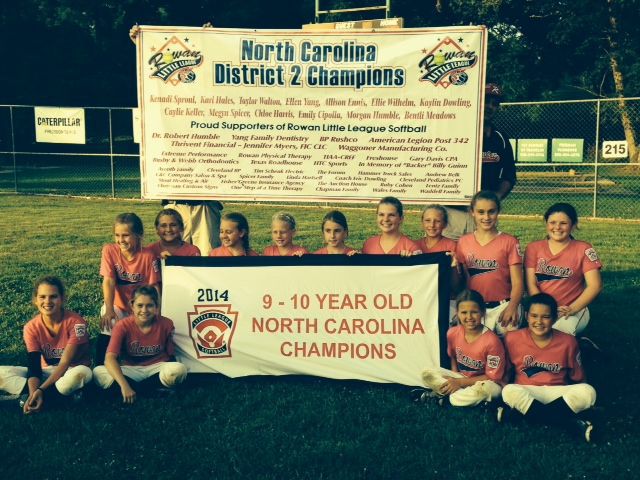 The state-champion Rowan Little League 10U girls softball team will start play in the Southeast Regional tournament in Clarksville, Tenn., on Friday.
The tournament runs through July 29. Other state champs in Clarksville are Florida, Georgia, Alabama, Tennessee, South Carolina, Virginia and West Virginia.
In the postseason, Rowan is 7-0 and has outscored opponents 113-14.
The tournament is 7 1/2 hours away from Rowan and will cost the league an estimated $15,000.
If interested in helping sponsor this team, please contact softball commissioner Dan Spicer at 704-232-1063, or league president Dan Wales at 336-409-6342.
“This is a dream come true for these girls and Rowan County Little League,” Wales said. “These girls deserve support and any contributions will be greatly appreciated.”
Donations can be mailed to Rowan Little League, 1080 N. Lilac Lane, Salisbury, NC, 28147. All donations are tax exempt as Rowan Little League is a non-profit organization. Those donating $200 or more will get their name on the team banner that will proudly be displayed on the Rowan dugout each game. All sponsors need to be turned in to the printer by Wednesday evening to assure all the names get on the banner.
East Rowan’s 9U all-stars will begin the Cal Ripken Baseball Southeast Regional at Gardens Park in Palm Beach Gardens, Fla., on Wednesday at 1:30 p.m. against the host team from Palm Beach Gardens.
East will play a doubleheader Thursday starting at 9 a.m. against Wilmington N.C. Supper Optimist and at 1 p.m. against Giles County, Tenn.
• The East Rowan 10U all-stars start the Southeast Regional at Arthur Goodman Park in Matthews Wednesday at 3 p.m. against Putnam County, Tenn. East faces Sarasota, Fla., at 8 p.m. Wednesday also.
East plays Laurinburg Thursday at 4:30 p.m., Westside, Ala., Friday at 11:30 a.m. and Mt. Pleasant, S.C., on Friday at 7 p.m.

The West girls rolled 82-68 in the East-West All-Star Game played in Greensboro on Monday. MVP Shaylen Burnette (Southern Alamance) scored 16 points for the West. Jamie Cherry scored 24 for the East.
• The West boys outscored the East 98-86.
• The soccer all-star games are tonight at UNC Greensboro at 6:30 and 8:30.
• The East-West football game is Wednesday at Greensboro’s Jamieson Stadium at p.m. West Rowan’s Scott Young is the head coach of the West team. West’s Chris Hassard, North Rowan’s Xavier Robinson and A.L. Brown’s Kyrell Williamson and Johnny Delahoussaey are on the West squad.
Brothers Michael and Ben Childress competed in the one-day Tarheel Youth Golf Association tournament in Mt. Airy.
Ben won the 11U age group with a 46.
Michael shot 3-under 69 to win the 14-15 age group by two shots. He had the low score for the tournament.
Kannapolis was rained out on Monday. The Intimidators are off today and start a series at Hagerstown on Wednesday.
• Corey Seager (NW Cabarrus) had a triple in his first game in Double A with Chattanooga.
• Nick Lomascolo (Catawba) continues to turn in impressive relief outings for the State College Spikes of the New York-Penn League. Lomascolo struck out five in two hitless innings and walked one on Saturday.
High Point rolled 14-3 against Winston-Salem on Sunday to finish a three-game sweep of the Area III championship series.
High Point joins host Davidson County as the Area III teams in the state tournament. Other teams in the field are Garner, Wayne County, Wilmington, Hope Mills, Shelby and the Gaston Braves. Games start Friday at Holt-Moffitt Field in Lexington. See Scoreboard for pairings.
The Area II title is still being decided. Hope Mills and Wilmington were rained out Monday.
Randolph County is hosting the Southeast Regional this year, while Shelby hosts the World Series.

Avery Rogers (East Rowan, Guilford) pitched another hitless, scoreless inning with one strikeout on Sunday as the Kernersville Bulldogs won 5-0 against the Catawba Valley Stars in the Carolina-Virginia Collegiate League.
China Grove Youth Baseball and Softball fall registration is under way at Dale’s Sporting Goods in China Grove.
Cost is $40 until Aug. 30.
Baseball: 5/6 Coach Pitch; 7/8 Pitching Machine; 9/10 Baseball, and 11/12 Baseball.
Softball: 5/6/7/8 group and 9/10/11/12 group. Contact James Solomon at 704-857-1439 or ymcanewhouse@yahoo.com.

North Rowan High football camp will be held on July 28-30 from 9 until noon daily.
The camp is for rising 3rd-8th graders. The cost is $40.
Register the morning of the 28th and make checks payable to North Rowan Football.