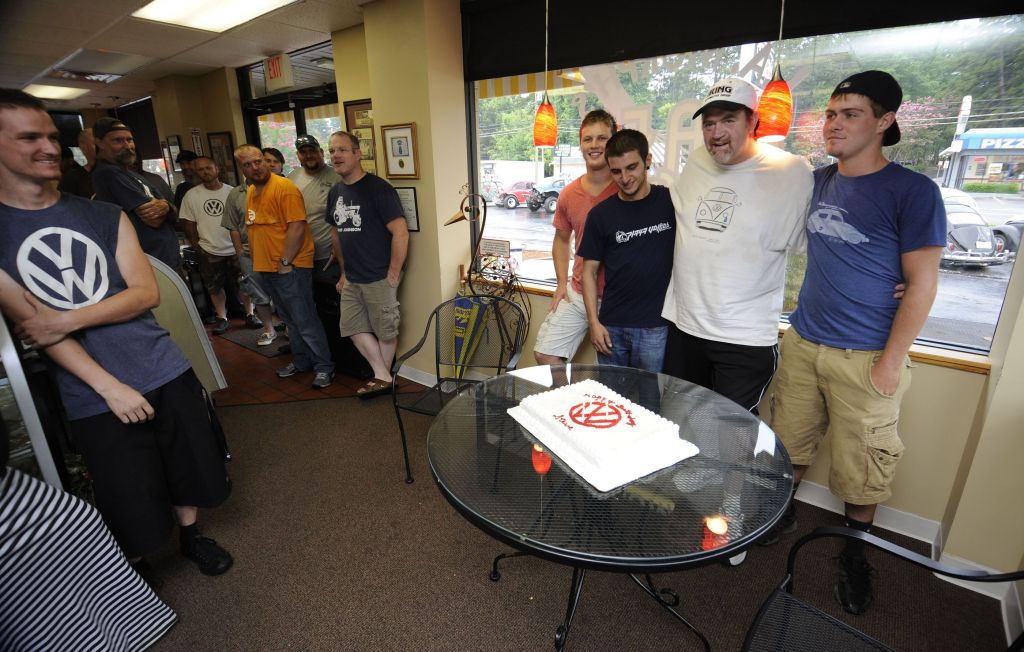 On Saturday, Steve Murph spent his 52nd birthday with 30 or so of his fellow Volkswagen enthusiasts. There were just four candles on the white sheet cake trimmed with red icing and a VW logo.
As Steve blew out the candles, he thought about April 17, when the flames reached his body, when he thought he’d never see his next birthday.
Steve was driving his beloved 1965 21-window VW Microbus back from a car show in Farmington. His son, Sam, 20, was following behind with friends. Son Tom, 18, had left earlier in the day. Steve had a wooden plaque beside him in his vehicle — he’d won an award in the show.
The group had stopped to eat in Mocksville. They were headed home when Steve, alone in the bus, dozed off behind the wheel. They’d camped out the night before.
“I was tired and all it took was getting something to eat,” Steve says. “I woke up in a ditch and hit a culvert. It flipped my bus and it landed on the top.”
Almost immediately, it caught on fire. Wearing a lap belt, Steve struggled to free himself.
“I was awake through all of it,” he says. “I smelled gas and shortly after that I heard a ‘foof,’ and the bus was on fire.”
A few people had stopped, but no one was stepping forward to help because of the flames. Inside, Steve was trying to get out of his seatbelt.
“I’m a really big guy,” he says, “and the cabins of these buses are not very big.”
He could see people outside the front window, but no one was moving.
“They were yelling, ‘Get back, get away from the bus, it’s fixing to blow up!’” Steve says. “I started hollering, ‘Please don’t go away. Don’t leave me. Don’t let me burn alive!’”
He continues, “I was praying to the Lord. I said, ‘If this is your will, I can’t do anything about it, but please don’t let me die this way.’
“I yelled, ‘Somebody get a rock or a stick or a hammer and bust out this front glass.’ Everything had done smoked out. The tents were burning in the back. There was no more air. About that time, I heard banging on the glass. Somebody had a hammer.”
Then Sam and his friends pulled up.
“I just came around the corner and saw a fire,” Sam says. “As we got closer, we could tell it was the bus. We had to get him out of there. All of us went up there and got him out.”
Steve had managed to unbuckle his seat belt and stick a hand out the window. There were cuts on his arms from the glass. It didn’t help that only two weeks before, he’d had rotator cuff surgery on his right shoulder.
“Everything was against me,” Steve says. “The hammer situation is when God sent the first angel to me. I don’t know who he is, and I want to thank him.”
He’s also thankful for his son and friends Victor Faries, Nolan Meyerhoeffer and Ben Conkel, who went to work immediately, dragging Steve out of the burning vehicle.
“We thought at first it was a big bonfire,” Nolan says. “And then we said, ‘Oh, it’s Steve!’ We ran. They already had a window broken.
“We said, ‘Oh, that’s the bus!’” Victor says. “We ran. We started yanking on Steve. People were just standing there. “
Just as the young men pulled Steve clear, the bus exploded.
Steve knew he’d been burned, but didn’t think it was that bad. With the young men’s help, he walked away from the bus.
“My right leg looked like an onion, turned black as could be,” Steve says. “The skin was just falling off.”
He put his head in Sam’s lap.
“He was crying,” Steve says. “He said, ‘We got you out. You’re gonna be OK.”
Sam and his friends walked Steve over to sit on a tailgate and gave him water. An ambulance arrived quickly and took Steve to Wake Forest Baptist Medical Center.

Emergency personnel couldn’t tell Sam much about his father. Sam was covered in soot and his father’s blood, but he was OK. At the hospital, Steve, too, was upset and crying. But he wasn’t worried about himself.
“I thought, ‘How is this gonna affect my son if I don’t get out of here?’” Steve says. “I was pulling strength from everywhere.”
Steve was placed in a tank of water, his burned skin scrubbed off. Steve wears a morphine pump because of degenerative disk disease, and did not get much relief from the pain.
He was taken to the burn unit, where his wife, Laura, was waiting. The Murphs also have a daughter, Kate, 16.
Steve had third-degree burns on his right leg, his right side and on the right part of his back. It would take about three days to determine the extent of his injuries. He was in pain, choking from the soot.
“It was just days of coughing and getting a lot of stuff out,” Steve says.
Laura, the owner of L.A. Murph’s, stayed by Steve’s side for the 2˝ weeks he was in the burn unit. He got skin grafts from his left leg — and the donor areas hurt worse than the burned areas, he notes.
Steve came home around the first of May, and still goes to Baptist two days a week for physical therapy. He bends, stretches, walks on the treadmill, and does a lot of work on his own at home as well.
But he’s found another therapy, too.
Before the accident, Steve had been talking with fellow VW owner Mike Zimmerman about hosting a cruise-in at L.A. Murph’s. Their plans finally came together, and the cruise-ins now take place the third Saturday of every month at the restaurant, located at 1532 W. Innes St.
Saturday night was the third such event, and everyone there helped Steve celebrate an unusually special birthday.
Before he blew out the candles, he drew Sam, Victor and Nolan in close.
“If it wasn’t for you guys, I wouldn’t be having this birthday,” Steve told the crowd. “These guys right here were the ones who made sure I got out of the bus without blowing up. Sam, I brought you into this world, and I want to thank you for keeping me in this world.”
Saturday was Mark Hall’s first cruise-in at the restaurant. He is the owner of a 1972 VW Baja Bug.
“We like to congregate with like-minded friends and Bug owners,” Mark says. “It’s like family.”
Brad Swink parked his 1971 Baja Bug next to Mark’s.
“I bought one two years ago and customized it,” he says. “I wanted one for a long time. You make it your own, because no two of them are the same.”
Brad and the others say they are glad to lend moral support to Steve.
“It’s really motivating me to get myself back on track,” Steve says. “It’s physically and mentally therapeutic. I get to get out and come and talk to my buddies. It’s been a lot of help to me.”
“He’s good people,” says Mike, who owns a 1959 Baja Bug. “When you see good people hurt, you want to help. This is camaraderie at its finest. We’re making something good out of something bad.”
For more information about the monthly cruise-in at L.A. Murph’s, call Steve Murph at 704-267-1925 or Mike Zimmerman at 980-234-8057.
Freelance writer Susan Shinn lives in Salisbury.