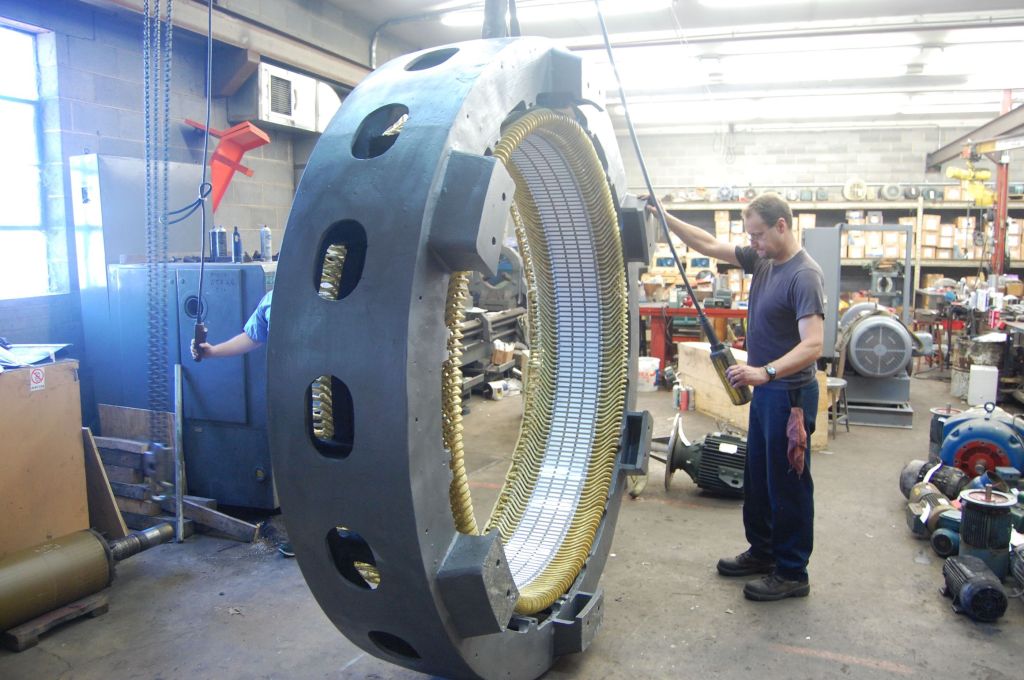 SALISBURY — Lingle Electric, a Salisbury mainstay since 1936, recently spent a month completing work on the largest project the company had ever undertaken.
Housed at 600 N. Main St., the family-operated motor shop has 12 employees working to repair and rewind electric motors for owner Hilton Lingle and foreman Jon Lingle.
It can be a busy job, as it is the only shop of its kind in the city.
Around the beginning of May, the shop began work a 5,000-pound stator that was lifted out of a hydroelectric plant in West Virginia.
A stator is the stationary component of an electric motor. A rotor turns inside of it to create an electromagnetic field. They can be found in all shapes and sizes.
This particular stator is believed to have been built in the 1920s by Westinghouse, forged from one piece of cast iron. It is rated to produce 2,400 volts and 600 kVA, a measurement for apparent power.
Lingle Electric workers had to restore every one of the 216 copper coils, replacing each with a new one, and then soldering them together. The new insulation that was used for the winding is superior to the original, making the unit more efficient than when it was first produced.
Stators have many real world applications. Power companies sometimes use them to run all their incoming electricity before it enters the plant, in order to stabilize the voltage. They can also be used to drive air compressors and even power gearboxes.
The Lingles surmise this stator had been rebuilt twice since it was first commissioned. It is now complete, and will be taken to the Burlington Mill Plant in Cooleemee to produce power once again.
Lingle Electric is open from 8 a.m. to 5 p.m. Monday through Friday. To contact the company, call 704-636-5591.