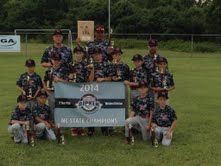 The Kannapolis Intimidators hit three early homers on Friday but still lost 5-4 to visiting Lakewood. Adam Engel, Jacob Morris and Christian Stringer homered for the Intimidators.
• Birmingham’s Daniel Wagner (South Rowan) went 2-for-3 on Friday to end a slump. Wagner had his eighth double of the season.
He’s batting .195 in 57 games in Double A.
• Chattanooga was rained out on Thursday in what was scheduled to be the Double A debut for Dodgers prospect Corey Seager.
• Paul Kronenfeld (Catawba) hit his second pro homer on Thursday for the Reds team in the Arizona League.

The Hurley YMCA Warriors are hosting a track and field camp July 21-25.
Sign up at Hurley YMCA.

Catawba baseball coach Jim Gantt lost 10 seniors from a SAC-championship team, but there will be plenty of competition to... read more