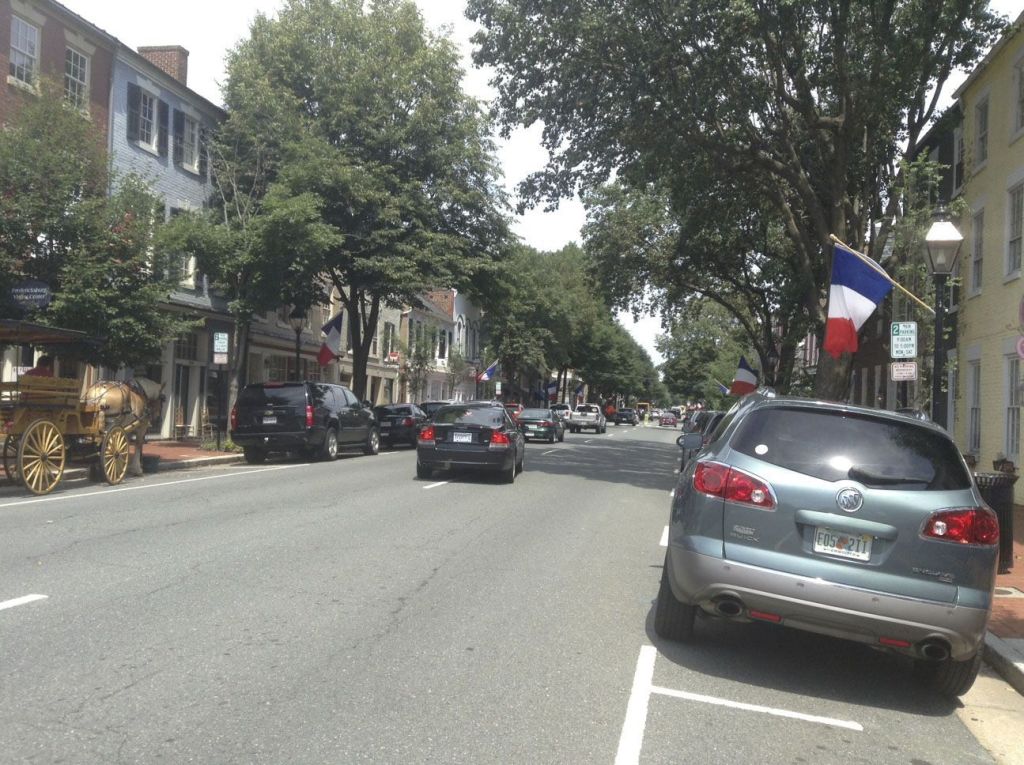 Last night, the rain poured for hours. Thankfully, I was inside at the Super Eight in Dumfries, VA., dry and sleeping well.

I decided to skip the Adventure Cycling map again today and once again forge my own plan. Heading south on U.S. 1, I had good roads for the most part with shoulders that came and went. Just a few miles out of Dumfries, I saw the entrance to the Marine Corps Museum and resolved to return later to see it.

Then, it was on to what I hoped might be the highlight of the day, a stop in historic Fredricksburg. Having never been there, I was excited to see it. I knew that the city was rich in history but wanted to find out more. With only about 23 miles complete, I rolled into town. The first three people that I asked had no idea where the battlefield site was. Throughout the trip, I have been amazed how little certain people know about their surroundings.

I followed the signs toward downtown, and decided to take a trolley tour at the visitor center. Knowing that the time for the tour would put me behind on making it to Richmond, I still felt the return was worth it. The very helpful folks in the visitor center even watched my bike for me while I was gone on the tour.

We learned about George Washington growing up across the Rappahannock River, near the staging site for the Union troops at Battle of Fredricksburg. Washington’s mother spent lots of time here and the local college is named after her. Houses from the mid-1700s were everywhere. We rode to the site of the Sunken Road, where about 18,000 casualties resulted from the major 1862 Battle of Fredricksburg. It is a beautiful little town that reminded me much of Charleston, S.C. My time was well spent here, but ran way over. Because it did run over, I didn’t go to the house that Stonewall Jackson died in. Next time on that too, as well as visits to the Wilderness, Spotsylvania Court House, Chancellorsville and Manassas battlefields. One person even told me that Jackson’s amputated arm can be seen at the Chancellorsville museum.

With a long climb away from the riverfront and back to U.S. 1, I was back on the way to Richmond. U.S. 1 runs along Interstate 95 in this area, and at every major stoplight, it seemed like lots of traffic was turning toward I-95. That suited me, because traffic got less and less as I got closer to Ashland and then Richmond.

I had picked out a motel that I wanted to call for a good deal but didn’t know its location, and because I needed to take a bathroom break, I stopped at a McDonald’s. All around were lots of restaurants and fast food places and a Food Lion. When I called the motel, I was amazed to find out that it was just 300 feet away.

The owner gave me a great deal, and I bought all my food tonight and the first part of tomorrow at Food Lion. No fast food stuff tonight. Yogurt, watermelon, a protein shake, power bars and bananas were all perfect. It is the first night that I have had access to a Food Lion where I stopped at the end of the day. Total mileage today is 74 on a pleasantly cool day.

Tomorrow, I will continue south on U.S. 1 for at least part of the day. It will take a while to clear Richmond, but past that, I haven’t figured it out yet. That will come later tonight.

As an added bonus, I am doing a study on motels along the eastern seaboard. Lots of patterns have developed, some of them very surprising. I will visit that again later in the process.

Thanks for all the messages. They are very much appreciated. I am hoping to be back North Carolina soon.