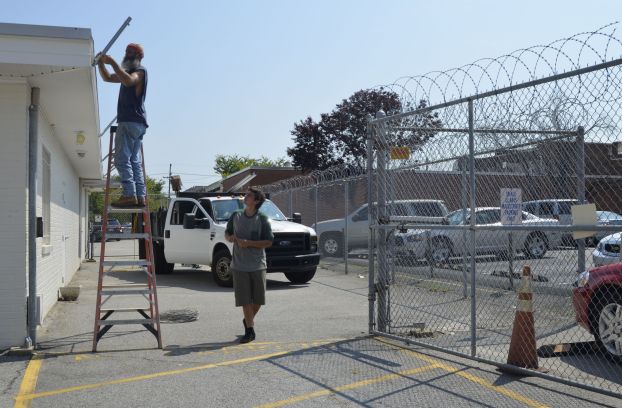 It took one day for a crew to make additions to a fence Monday that surrounds the Rowan County Magistrate’s Office just five days after a suspect escaped custody there.
“We looked and saw we had an opportunity to add Concertina wire,” said Don Bringle, head of Rowan County Facilities Maintenance.
He said the new wire was spaced more closely together, additional razor wire was placed above the entrance and exit gates as well as the roof edge.
Bringle said the previous wire was spaced about 12 inches apart and now the spacing between the wire is closer to six inches. The crew also added a rail around the bottom of the fence.
Jameel Stephens-Maddox was in the custody of a Rowan County Sheriff’s deputy who’d secured him to a metal bar by handcuffs behind his back in the magistrate’s office holding area. Stephens-Maddox was able to manipulate his hands out of the metal cuffs and left the holding area.
Deputies went a Park Avenue home Wednesday to serve seven outstanding warrants on Stephens-Maddox. He ran out the back door, but was soon apprehended by other officers at a Longview Avenue home.
Officials believe once Stephens-Maddox was inside the magistrate’s office he was able to free himself, jump onto a patrol vehicle and jump onto the roof and over the razor wire.
Statesville Fence & Landscaping met with officials, which included Sheriff Kevin Auten, last Thursday to determine what the county required at the cost of $2,800.
The crew not only raised the wire on the top of the fence, but they also changed the mechanism on the back door, he said.
The door had a pressure switch that released once a person approached, Bringle said, the change was made so that the magistrate can open the door via a button.
Officials also consulted the Salisbury Fire Marshal to look at the requirements before the changes were made.
The concern was that the back door would be locked until a magistrate pushes a button and therefore creating a fire code violation, he said.
Bringle said, “because it was a protected area” officials could allow that door to be locked.
Authorities have not located Jameel Stephens-Maddox and a $1,000 reward for information about his location remains in place.
Anyone with information can call the Rowan County Sheriff’s Office Criminal Investigative 1st Lt. Chad Moose at 704-216-8687 or 911.