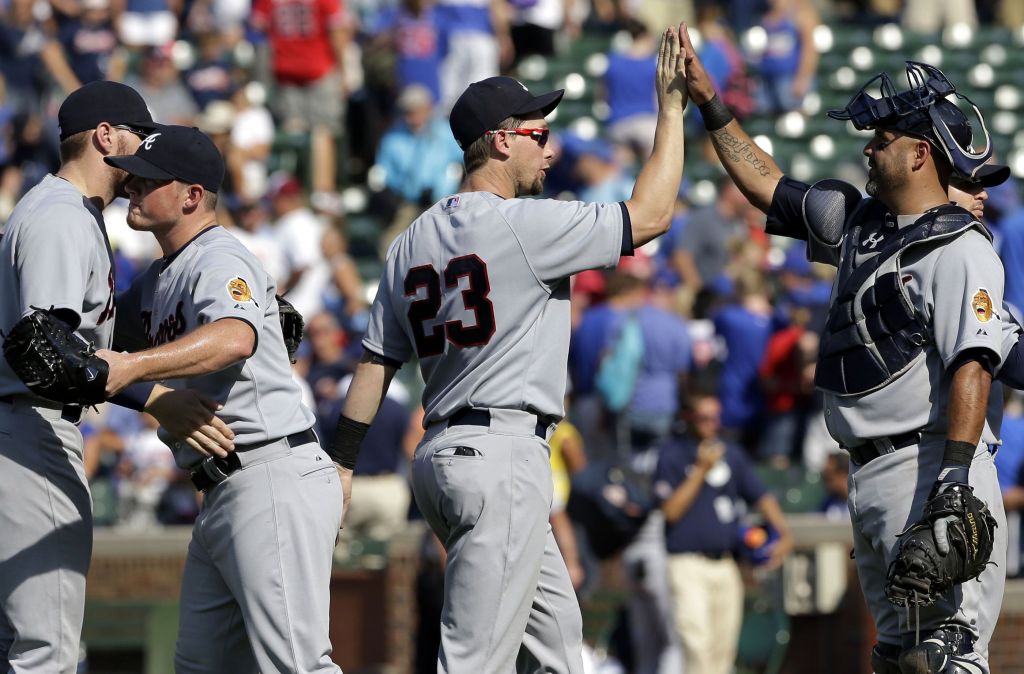 CHICAGO (AP) — Chris Johnson can rest easy during the All-Star break. He earned a couple days off.
Johnson had three hits, including his third homer in two days, and the Atlanta Braves beat the Chicago Cubs 10-7 on Sunday to keep pace with Washington at the top of the NL East.
Johnson hit a long drive to straightaway center field for a three-run shot in a four-run third inning against Travis Wood (7-8). Johnson also went deep twice in the Braves’ 11-6 victory at Wrigley Field on Saturday.
“The biggest thing for me is the fact I’m swinging at strikes,” he said. “When I swing at strikes, I can do some good things.”
Atlanta (52-43) has won three of four since a four-game losing streak. It heads into the break one percentage point behind the division-leading Nationals, who won 10-3 at Philadelphia.
“We had a pretty good first half, better than pretty good,” manager Fredi Gonzalez said. “Now we’ve got to enjoy this break and come out in the second half and keep firing.”
The Braves played without struggling second baseman Dan Uggla, who was suspended by the team for the series finale at Chicago. Atlanta announced the punishment on its Twitter feed, with no further explanation, and Gonzalez called it an “internal matter.”
The last-place Cubs (40-54) have lost eight of 10. Arismendy Alcantara and Chris Coghlan each hit a two-run homer off All-Star Julio Teheran (9-6).
It was the first career shot for the 22-year-old Alcantara, who also had a bloop double in the first and is batting .391 (9 for 23) in his first five major league games.
“With my ability, I’m having fun,” Alcantara said. “It can be fast. I’m having fun.”
Chicago scored three times in the eighth, highlighted by John Baker’s two-run double, but Jordan Walden got Junior Lake to fly out to center with a runner on second for the final out of the inning.
All-Star Craig Kimbrel then worked the ninth for his 29th save in 33 opportunities.
“We put ourselves in a position potentially to even edge closer, and we just fell a little short,” Cubs manager Rick Renteria said.
Teheran pitched seven innings in his first start since a rough outing against the Mets. The right-hander lasted just 3 1-3 innings in an 8-3 loss at New York on Tuesday.
Teheran retired 12 in a row after Chicago put runners on first and second with two out in the first. He allowed seven hits while improving to 2-0 in four career starts against the Cubs.
“I know that my last outing I didn’t have a good outing,” said Teheran, who is ineligible for the All-Star game because he started on Sunday. “Just trying to come back like I did twice this year.”
Wood was charged with seven runs and seven hits in six innings. The left-hander is 0-3 with a 6.49 ERA in his last five starts.
Wood issued leadoff walks in the second, third and fourth innings, and the first two were costly. Gerald Laird had a two-run double in Atlanta’s three-run second, and Jason Heyward singled home a run before Johnson connected in the third.
Johnson’s sixth homer was part of his 30th multihit game of the season. The third baseman was walked intentionally in the seventh to get to Tommy La Stella, who doubled home three runs to give the Braves a 10-2 lead.
The 34-year-old Uggla has played sparingly since La Stella was promoted from Triple-A Gwinnett on May 28. The three-time All-Star is batting .162 with two homers and 10 RBIs in 48 games.
Gonzalez said he expects Uggla to be with the team when it resumes play on Friday night against the Phillies. He also isn’t worried about the effect of the suspension on his team.
“I don’t think so. I got a pretty good pulse of our clubhouse,” he said. “If anybody wants to talk to me, my door is always open. And they know that.”
NOTES: Atlanta also promoted INF Phil Gosselin from Gwinnett before the game. … Wood will start Chicago’s second game after the All-Star break. RHP Edwin Jackson (5-10, 5.64 ERA) starts the series opener Friday night, and RHP Jake Arrieta (5-1, 1.95 ERA) pitches next Sunday against the Diamondbacks. … RHP Ervin Santana (7-6, 4.01 ERA) will start Friday night against Philadelphia in Atlanta’s first game after the break. But Gonzalez said he wasn’t sure just yet how the rest of the rotation would line up.