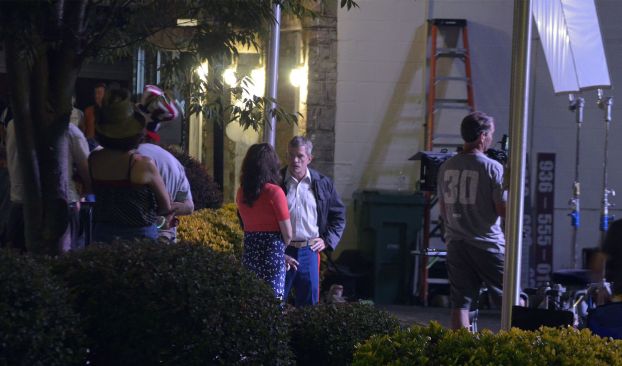 FAITH — As dusk fell over town, a long line of locals and not-so-locals poured onto Main Street with lawn chairs, blankets and flags.
They were there to watch the town’s Fourth of July fireworks – never mind the fact that it was a week after Independence Day, or that the “fireworks” were really multicolored spotlights.
The crew of the MGM-Warner Brothers film “Max” returned to Faith on Friday with actors, a week after filming scenes during the actual Faith Fourth of July parade.
Around midday, local residents said, a small army of crew descended on the town.
And some 150 extras from Rowan County and elsewhere arrived to make up crowd scenes.
Throughout the day, they filmed scenes set during a Fourth of July parade and fireworks.
Filming went on into the night. At dusk, after getting the crowd into position on Main Street, cameras and crew were ready.
Actors Thomas Haden Church, Lauren Graham and Josh Wiggins came out from the cast area – a small forest of trailers set up behind Shiloh Church.
“Opening marks!” came the shout from the crew tent.
“Here we go, folks!” an assistant yelled to the crowd.
“Roll sound!”
And then, action. The extras in the background went “ooh!” and “ahh!” and pointed up at the pretend fireworks.
The colorful spotlights flashed on while Graham and Church acted out their scene.
During a break from filming, Wiggins, youngest of the stars in town for the shoot, said he’d enjoyed his time working on the film in North Carolina.
“I love the woods, the outdoors,” said Wiggins, 15, whose film credits include the critically-acclaimed 2013 movie “Hellion.”
In “Max,” Wiggins said, “I play Justin, who is somewhat of a rebellious kid. He feels he’s been overshadowed by his older brother, kind of the outcast of the family.”
“Max” is the story of a dog that, after helping soldiers in Afghanistan, returns to the U.S. and is adopted by his former handler’s family.
Wiggins, a native of Texas, said he’s always liked small towns like Faith.
From the brief conversations he had with locals, Wiggins said, “they all seem really nice. They’re very important to the production, more than they realize. It’s good that they could come out and be a part of it.”
The film crew transformed a block in the center of Faith into a Texas town for the event.
There were some subtle touches, such as covering up real phone numbers on signs with fake “555” numbers.
Despite the hot weather and the long day, the atmosphere was positive.
While they waited for filming to begin, a crew member shouted “Heads up!” and threw candy into the audience, prompting cheers.
Chrystal Cretin, associate at Tom’s Hairport, said shop owners were asked to leave their lights on for the filming, to add character to the street.
Cretin, who was outside her shop for the nighttime scenes, said it had been a long day.
“Probably won’t get out of here ‘til 2 o’clock, but that’s fine,” Cretin said. “I feel honored that they’re doing it in our little town. It gives our town exposure.”
Teresa Turner, co-owner of Ella Rae Florist, said this was the biggest event Faith had seen since President George Bush visited in 1992.
The filming also attracted extras from out of town, including Walter and Heather Burks, of Gastonia.
They were extras in an earlier scene from “Max” that filmed elsewhere last week, Walter said.
Heather said they learned about the shoot in Faith from Facebook. “It’s our first movie we’ve done,” she said.
“I guess the coolest part is to see how movies are actually made,” Heather Burks said, “and then go see the movie and have a chance of seeing yourself pop up on the screen.”
Mayor Todd Peeler said the filming had been a boon for the town.
“It’s been a neat experience to see how all this comes together just to make one scene,” Peeler said, as he stood in the back of the crowd of extras waiting to film the fireworks scenes.
“You won’t believe how many people they brought in to do all this stuff,” Peeler said. “… I think one (crew member) said, ‘If we don’t have it, we’ll build it,’ and I believe they can.”
Even some who couldn’t get to be extras had good things to say.
Schrade Daniel, Breeanna Medlin and Coryn Soul, local high school students, drove downtown to see what was happening.
Medlin said she’d seen the filming earlier Friday while she was out with her father. They came back hoping to see what was going on.
Ronnie and Stefanie Shutt did get to be part of the filming, both during the parade scenes and later.
“I ate pretend hot dogs,” said Ronnie, 9.
Their aunt, Debbie Benfield, had heard about the opportunity while she and Stefanie, 10, were getting haircuts at Hairport.
“It’s a neat experience,” Benfield said.
“I hope everyone in Hollywood can see me!” Ronnie said. “I want to be famous.”

Educators from all 50 states and 73 countries flocked to Atlanta for the International Society for Technology in Education conference... read more