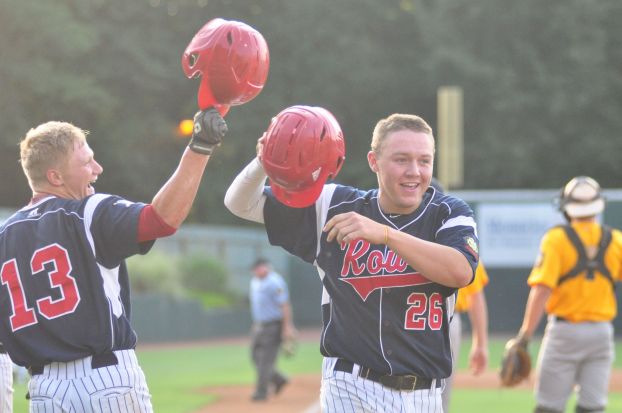 SALISBURY — Chance Bowden didn’t just belt two homers for Rowan County on Saturday at Newman Park — he walloped two homers on breaking balls thrown from different arm slots.
Bowden’s continued maturity as a hitter may mean it’s time to tear up the don’t-throw-him-a-fastball scouting report on the slugging first baseman who is headed to Catawba this fall.
Bowden’s second homer of the night and seventh of the summer was the big one in Rowan’s 10-5 victory over Winston-Salem in Game 1 of a best-of-five series. It came in the seventh, shortly after Winston-Salem, fighting back from a 5-1 deficit, had tied the game 5-all on a two-run blast off Rowan ace Connor Johnson by Hank Niblock.
“They had gotten momentum and it was like the game was right back to 0-0,” Bowden said. “But then Riley (Myers) got a big hit.”
Myers started the Rowan seventh with a ringing double, and Winston-Salem coach Mike Lovelace held a mound meeting with pitcher Shane Sullivan, with a base open and Bowden coming up.
The plan was to pitch carefully to Bowden, not to give him anything good, but he promptly launched the two-run homer that put Rowan ahead to stay.
“Sullivan just left a pitch up, and that’s what the good hitters do — they make you pay for the mistakes,” Lovelace said. “Bowden hit two no-doubters,”
Bowden smacked a solo homer leading off the fifth when Sullivan dropped down and delivered sidearm.
“You didn’t know where he was going to throw from, so you really had to stay back and stay focused,” Bowden said.
Rowan’s Heath Mitchem got the first key hit, a double to left-center in the second that chased Harrison Baucom home for a 1-0 lead. Mitchem also scored on that play, trying for third when the throw home couldn’t be cleanly handled and scoring when the throw to third sailed away. Mitchem tweaked a hamstring injury running, but it was 2-0.
“As a left-handed hitter, you never mind seeing a right-handed sidearmer,” Mitchem said. “My eyes got kinda big, and I got a good pitch to hit.”
A triple by Ty Andrus and a sac fly by Sullivan put Winston on the board in the third, but Rowan got a two-run, opposite-field double by new cleanup hitter Dustin Ritchie in the bottom of that inning. Ritchie’s clutch poke came with two strikes. He found a hole just inside the first-base bag and gave Rowan a 4-1 lead.
“That pitch he hit was probably a foot outside,” Lovelace said with a sigh. “But that’s what separates Rowan from a lot of teams. They’ve got hitters who know how to get runs home.”
Ritchie said he’d gotten in a hole on two changeups from Sullivan that he was out front on, so when he saw a fastball, he was eager to hit it.
“Ritchie is hot, and that’s why we’ve moved him up to the cleanup spot,” Rowan coach Jim Gantt said. “He’s a run-producer and producing runs is what it’s all about. People get too hung up on what someone’s batting average is. The object is to score runs.”
Andrus had three of Winston’s 10 hits. Nine of those hits came against Johnson, who worked seven innings and improved to 7-0. He’s won 21 straight decisions in Legion and high school since May, 2013.
“I finally got back in the groove some,” said Johnson, who had not been crisp in the playoffs. “I felt good and had my mechanics back. I hit my spots well, but that’s a good-hitting team and they still hit a lot of balls hard. Bowden kind of saved us.”
Gantt said Johnson was better than his stat line.
“He did a better job with his off-speed stuff tonight,” Gantt said. “He didn’t make a lot of mistakes, but when he did make one, they hit it.”
Cory Fries pitched the eighth and ninth for Rowan and earned a save. It was only 8-5 when he pitched a 1-2-3 eighth.
Sullivan went all the way for Winston despite allowing 15 hits. Bowden, who also doubled, went 3-for-3. Luke Setzer had three hits, including a run-scoring single for insurance in the eighth. Myers, Ritchie and Baucom, who added a running catch to his night’s work, had two hits apiece.
“Sullivan has baffled some good-hitting teams, but Rowan can really swing it,” Lovelace said. “We swung it well too, but we had a lot of balls at people. We’ll just keep swinging and keep throwing in Game 2.”
Game 2 is tonight at Mocksville’s Rich Park. Josh Craver, a Charlotte-bound lefty, will throw for Winston-Salem. Lefty Brandon White, a hero in the Concord series, is the probable hurler for Rowan.
“We know we won a game tonight, not a series,” Bowden said. “Everyone knows this is not going to be easy. That team can hit. One through nine, they can hit.”

The Run It Down Alumni Basketball Tournament is planned for the North Rowan gym on July 25-27. Teams will represent... read more