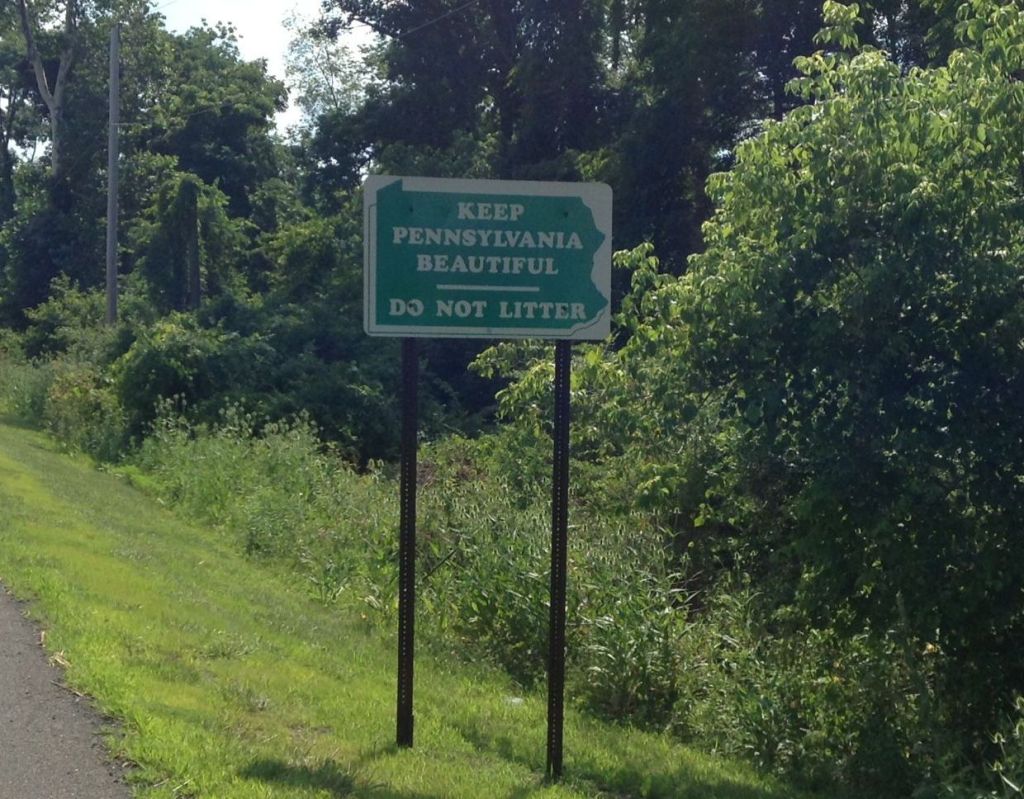 Late Thursday night, I came up with a plan to ride out of New Jersey and possibly link up again with the Adventure Cycling maps at Conshohocken, Pa. I started a little earlier than I had been, hoping to be ahead of the massive New Jersey traffic. I said a little longer prayer when I asked God to ride with me on this day. It was easy to be a little worried. Some of my singing this morning included hymns.
Right away, I had to ride almost six miles on Tonelle Avenue, the busy street where my motel was. All went very well, until I noticed that I had to ride over a very busy bridge under repair, and I wasn’t even sure that it was the right way.
After talking with the bridge attendant, Ron Thorword, we decided that I was going to have a hard time on the other side of the bridge. Little did I realize that the only way off the bridge was to descend a long series of wooden steps. The bike weighs about 90 pounds fully loaded, and it was all I could do to hold onto it as I stepped down. Thankfully, I made it to the bottom.
Next came two stops in an industrial trucking area to see if they could help me get headed back in the right direction. They did, but I had to walk over another long bridge, then get on a few roads that I shouldn’t have. In fact, I was able to ride on very busy four lane roads for most of the day. I went right by Newark Airport, clearly on a road that I shouldn’t have ridden. US 1 and 9 is about as busy as I can imagine an interstate highway type road being. My plan was to ride until someone made me got off.
I exited onto US 22 toward Hillside, N.J., and rode along beside some of the fastest driving cars that I had been close to. The last major turn of the day was on to US 202 South and I stayed on it until just before I turned off to head for a motel.
The traffic was amazing. It took about 50 miles of rushed driving before the cars finally started thinning out.
I crossed the Delaware River about 3 p.m. and midway across it left New Jersey. I pedaled up to a toll booth where I was grilled about riding on these roads.
The grilling came from a New Jersey toll booth worker, clearly wanting to show his authority. He told me that cyclists can’t ride on interstate highways. Since when do interstate highways have dozens of traffic lights and businesses all along the way?
I was immediately reminded of the paving company stunt last summer in the Grand Tetons National Park where they were not going to let me ride through a new paving area.
This guy claimed that there were signs everywhere that state that I couldn’t be on his road. Of course, I laughed at him and told him how far I had already come that day. Mr. Toll Booth Man told me that he couldn’t do anything about me now that I was sitting on Pennsylvania property. I laughed again. Then I asked him why there was no “welcome to Pennsylvania” sign. He said there just isn’t, the same I thought as his fantasy signs about me not riding on his highway.
I met Ignacio Lopez about mid-morning while pondering a stop for breakfast. Ignacio had ridden his own cross country ride two years ago, so we had lots to talk about. We had breakfast together and he made a few photos.
After much discussion upon entering Pennsylvania, I am spending the night in Doylestown. Total miles today were 82. I had to go about four miles off route to get a reasonably priced motel, one that saved me about $50 over the going local rate. Yes, Susan Shinn, I am working hard to save a few dollars.
It was a beautiful day that ended well.
Just a few thoughts that I don’t think I have mentioned earlier came to mind as I was riding. Maine and New Hampshire had their ABC stores in convenience stores. New Jersey had auto repair shops attached to many of their convenience stores. Maine is probably the cleanest state I have been in, and New Jersey wins hands-down as the dirtiest.
Best roads go to New Jersey and Rhode Island overall and Massachusetts has by far the worst.
Tomorrow, I plan to get closer to Washington, D.C., but have not decided yet just how. Good weather is expected for several more days.
Rowan County resident David Freeze is cycling from Bar Harbor, Maine, to Key West, Fla. Contact him at david.freeze@ctc.net.