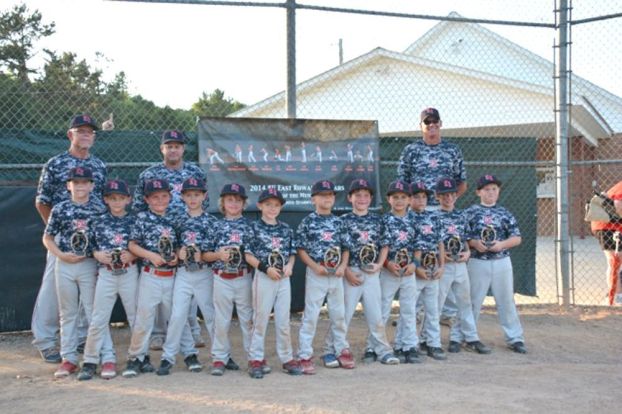 East Rowan pitcher Connor Johnson and East second baseman Michael Caldwell were named to the N.C. Coaches Association 3A All-State team.
Other area players named to the 3A team included Cox Mill pitcher Julian Smith and West Iredell shortstop Brett Pope.
West Davidson’s Chandler Simmerson and Mount Pleasant’s Ryan Ross made the 2A All-State team.
Albemarle’s Bryan Blanton and Justin Crump and North Stanly’s Zac Almond made the 1A All-State squad.
Rowan County Junior Legion lost 2-1 at Eastern Randolph on Sunday and fell 11-8 at Newman Park on Monday.
Rowan lost the series two games to one and finished 20-5.
• Carson fell 5-1 to Southeast Guilford on Sunday, ending that series. Southeast Guilford won two straight.
Kernersville won 2-1 against High Point on Monday and holds a 2-0 lead in a best-of-five series.
Eastern Randolph topped Winston-Salem 4-1 on Monday to square that series at a game apiece.
Carson’s Michael Morrison went 11-for-13 over the weekend at Wake Forest for the Charlotte MegaStars.
Morrison, a rising junior outfielder, had four triples and two doubles.
Justin Seager (NW Cabarrus) had two hits and drove in a run for Clinton on Sunday. Seager is batting .253 with a homer and 21 RBIs.
• Whit Merrifield (Davie) homered for Omaha on Sunday and had a triple and double on Monday.
Merrifield is batting .600 in his last 10 games and has batted .384 in 28 games since being moved up to Triple A by Kansas City.
Merrifield’s hitting coach in Omaha is Tommy Gregg, who was a football and baseball standout at Wake Forest. Merrifield’s father, Bill, was a star at Wake Forest.
• Corey Seager (NW Cabarrus) exploded again for Rancho Cucamonga on Sunday. He had four hits, including two homers, and drove in six.
Seager is batting .353 with 17 homers and 65 RBIs.
• Paul Kronenfeld (Catawba) got off to a rough start with the Arizona League Reds, but he’s knocked in a run in each of his last three games.
Avery Rogers (East Rowan) pitched in both games of a doubleheader with the Kernersville Bulldogs on Sunday. He struck out two, walked one and got five outs.

The eGolf Tour’s 10th annual Southern Open will be contested at the Club at Irish Creek on July 9-12. The tournament will feature a field of approximately 120 players from over 25 states and 10 countries competing for an estimated $15,000 first-place prize.
• Salisbury’s Eric Edwards shot 68 at Monroe Country Club and is tied for second after the first round of US Amateur sectional qualifying.
Four golfers will advance.
• East Rowan’s Logan Shuping shot 70 for the first-round lead in the Sedgefield Junior Amateur, a Tarheel Junior Golf Tour event held in Greensboro.
Kannapolis second baseman Christian Stringer belted two home runs to lead the Kannapolis Intimidators to a 12-7 win over the Hagerstown Suns on Sunday at Municipal Stadium. Kannapolis (41-44, 12-6) snapped a three-game skid.
Stringer, who finished with a career-high five RBIs and three runs scored, put Kannapolis on the board in the first inning with a two-run shot and added to the lead with a three-run blast in the fourth.
Jordan Guerrero improved to 6-0 with the win, working five innings.
• On Monday in Greensboro, Trey Michalczewski blasted his first career grand slam and drove in a career-high five runs to lead the Intimidators to a 12-8 win over the Greensboro Grasshoppers at NewBridge Bank Park.
Kannapolis (42-44, 13-6 second half) hit three home runs in the game and scored 10 runs from the fifth through seventh innings to pull away.
Trailing 6-5, Michalczewki’s slam pulled Kannapolis back in front with no outs in the top of the sixth.
The 19-year-old third baseman followed three straight walks issued by Greensboro reliever Miguel Del Pozo with his team-leading ninth blast of the season and his first career slam. Michalczewski finished the game 3-for-5 and scored twice.
Ryan Leonards and Adam Engel added home runs in the seventh inning, extending the Intimidators lead to 12-6.
Brad Salgado took over on the mound with two outs in the fifth inning and retired 10 of the 11 batters he faced, including the first seven, over 3 1/3 sharp and scoreless relief innings.
Salgado (1-0) earned the win.
Hoppers reliever Miguel Del Pozo (1-5), who gave up the slam to Michalczewski during his relief inning, took the loss.
Kannapolis struck quickly in the first inning.
With runners on first and second, Michalczewski grounded to first base, where Felix Munoz fielded and fired to second base for one out.
The slide of Stringer took out the shortstop and jarred the ball free, allowing Adam Engel to round third base and dash to the plate for a 1-0 lead.
Greensboro jumped in front with a four-run second inning. Greensboro loaded the bases against Thad Lowry, who walked Rehiner Cordova to push the tying run across.
Yefri Perez followed with a two-run base hit, and J.T. Riddle drove in a run on a groundout for a 4-1 lead.
The Intimidators got a run back in the second inning when Stringer doubled with two outs, and Michalczewski followed with an RBI-single for his team-leading 54th RBI of the season.
In the fifth inning, Kannapolis pulled back in front and chased Greensboro starter Domingo German from the game.
Danny Hayes followed a Michaclzewski base hit with a double to the gap in left-center field, scoring Michalczewski from first.
Jacob Morris singled to drive in Hayes, tying the game, and Carl Thomore added a go-ahead double, plating Morris for a 5-4 lead.
Greensboro reclaimed the two in the bottom of the fifth when Lowry issued walks to the first two batters, who came around to score.

Kentrell Dewitt’s RBI-single put the Hoppers back in front, 6-5, and ended Lowry’s night after 4 and 2/3 innings. Lowry took no decision, allowing six runs on seven hits while walking a career-high six batters, the most by an Intimidator this season.

The Intimidators continue this 3-game series in Greensboro on Tuesday against the Grasshoppers. First pitch at NewBridge Bank Park is at 7:00 p.m. The team returns home to CMC-NorthEast Stadium on Thursday, July 10, for a 4-game series against the Asheville Tourists. For ticket and promotional information, call the F&M Bank Box Office at (704) 932-3267 or visit IntimidatorsBaseball.com.