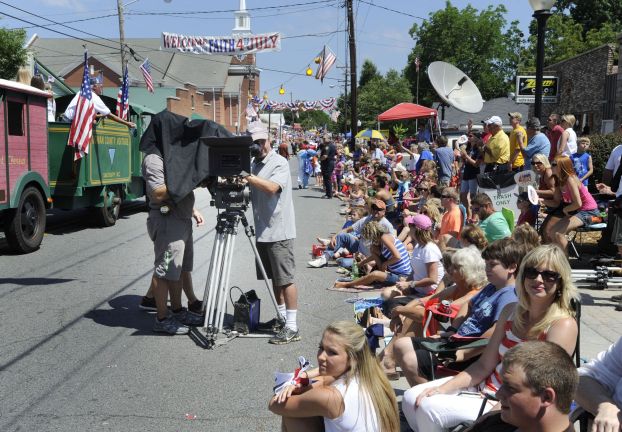 Filming for “Max” to continue this week in Faith

FAITH — Filming for the movie “Max” is slated to continue this week in Faith, after crowd scenes were shot during Friday’s Faith Fourth of July parade.
Ken Blancato, producer, was on scene Friday as film crews shot footage during the parade. He said the Warner Bros. and MGM production is set for a January 2015 release.
The Internet Movie Database describes the plot of “Max” as: “A dog that helped soldiers in Afghanistan returns to the U.S. and is adopted by his handler’s family after suffering a traumatic experience.”
Blancato said the film will star Thomas Hayden Church as a father, alongside a young new actor, Josh Wiggins, and actress Lauren Graham, known for her roles on “Parenthood” and “Gilmore Girls.”
“In the course of the film, there’s a Fourth of July parade,” Blancato said. “We heard this is one the best Fourth of July parades anywhere. It’s proved to be true, it’s a great parade.”
Randall Barger, one of the organizers of the Faith Fourth events, said the production company had contacted them only a few days before the parade.
Barger said location scouts had heard about Faith Fourth and met with organizers after the June 21 Faith Street Dance.
Filming with the actors is slated to take place in Faith on Wednesday, Barger said.
Blancato said he was pleased with the response the crew had gotten.
“It’s fantastic,” Blancato said. “It’s beautiful to see all these young families. The kids are just incredible.”
He said the film is scheduled to open on Super Bowl weekend, Jan. 30, 2015.
Contact Hugh Fisher via the editor’s desk at 704-797-4244.