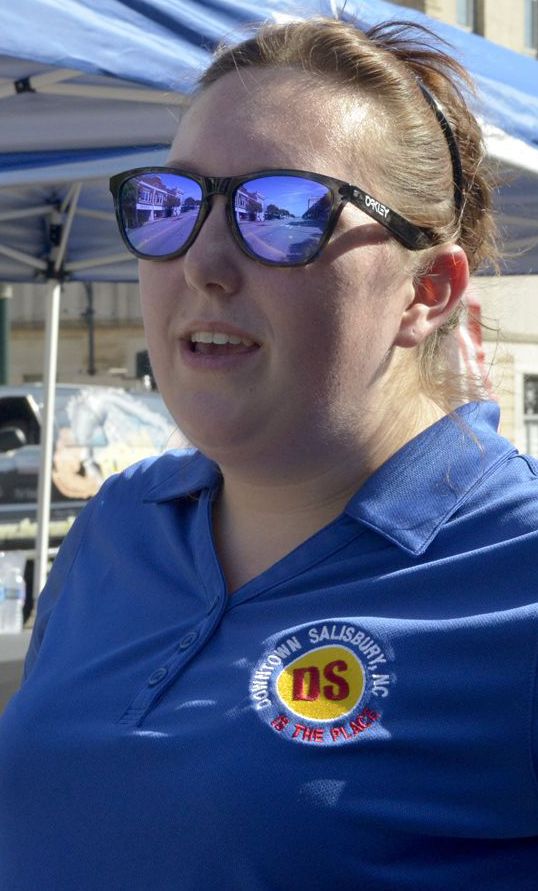 SALISBURY — It’s not every day you see kids playing in the middle of North Main Street.
But hula hoops, sidewalk chalk and even a gigantic checkerboard were on hand for the Salisbury Streets Alive event.
From 4 to 8 p.m. Friday, several blocks of downtown streets were closed to traffic so that kids and cyclists could play, and others could visit.
Mollie Ruf, event coordinator with Downtown Salisbury Inc., said this month’s first Friday event was an attempt at bringing the “Open Streets” movement to the city.
Ruf said Eric Phillips, owner of Skinny Wheels Bike Shop, came up with the concept based on a movement that’s spreading elsewhere in the U.S.
It’s a simple idea: close off neighborhood or city streets so people can enjoy the open space. Picnics and games are common.
“The idea is to transform a street, any street, into an open space where people can do what they’re doing now,” Phillips said, gesturing out to the streets where small groups of two or three people were trying out activities or talking.
Phillips said the idea is right for Rowan County, but organizers’ decision to have the event on July 4 affected turnout.
“That’s the choice that we had, so we ran with it,” Phillips said.
“It’s the first one of these … We’ll work on publicizing this, and having these on a more consistent basis,” Phillips said.
As the sun started going down, around 7 p.m., things picked up.
Kids and grown­ups alike rode bikes around downtown streets.
Vendors sold food, while nearby, exercise and fitness demonstrations were held.
On West Fisher Street, across from the downtown mural that was recently targeted by a vandal, a temporary, mobile graffiti wall was put up in the middle of the roadway.
Wearing masks to protect them from paint fumes, kids got a chance to spray paint their names and other artistic designs onto the wall.
“They’re having fun. Look at them, you can tell,” said Casey Graham, as her younger sisters Chy’na, Clear and Cherish Wesley took their turn.
Grown­ups got into the act, picking up hula hoops and trying out the giant checkers set Crystal Gale just decided to dance to the music. “I’m hula hoop impaired,” she joked.
Darrell Scoggins challenged his girlfriend’s daughter, Gracie Lineberger, to a game of checkers.
“We’ve had some bubbles and done some hula hooping,” said Scoggins, who is a member of Crossfit Rowan and found out about Salisbury Streets Alive through them.
“It’s a great idea. A good time for the public to come out and enjoy downtown Salisbury,” Scoggins said.
A little farther down the road, Carrie McNeely watched as her daughter, Reese, nine months old, tried to figure out sidewalk chalk.
McNeely said she’d heard about the event on Facebook.
Her two sons and husband played nearby, using a giant wand to blow a small army of soap bubbles.
While the turnout wasn’t what organizers hoped, Phillips said there’s definite potential in “Open Streets” events.
Phillips said one idea would be to hold these events on Sunday afternoons, when street closures wouldn’t impact downtown merchants.
Or, he said, a similar event could be held in different neighborhoods, cities or towns.
“You could do one in Salisbury, one in China Grove, one in Faith,” Phillips said.
“This really about the community, giving them an outlet to have fun,” Ruf said.
Contact Hugh Fisher via the editor’s desk at 704­-797-­4244.