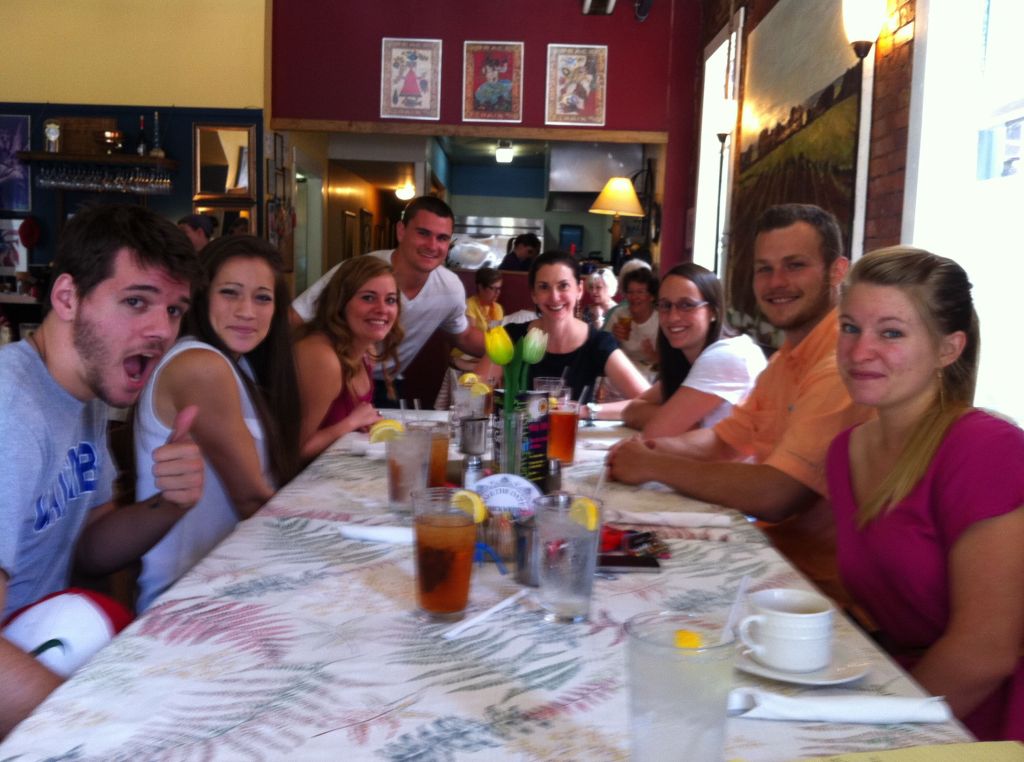 The core of Catawba College’s first class of first-generation students targeted by a CIC/Walmart College Success Grant graduated in May. Most of these students said the extra assistance and attention they received thanks to the funding provided by the grant helped them persist and graduate from college.
Nine of the 17 first-year Catawba students who were targeted by the funding persisted through four years of study at the college. These NextGen students met in Associate Professor of Sociology Dr. Maria Vandergriff-Avery’s first year seminar when they arrived on campus. Many took their first airplane ride to visit Washington, D.C., and toured its museums, historical sites and government offices over Christmas break of the 2010-2011 academic year.
One of these students, Timberly Motsinger of Wallburg, recalled that trip when her classmates and professor gathered for a farewell luncheon before Catawba’s 2014 graduation.
“That trip to D.C. was very helpful to me,” Motsinger said. “It was my first time on a plane and my first time ever in the capital. It gave me such confidence that the next summer, I flew to Japan on my own to visit my brother who was in the Marines and stationed there.”
Motsinger, who will enter Elon’s law school in Greensboro this fall, also credits the additional advising and guidance she received from Vandergriff-Avery as helping her stay the course to graduate from Catawba. “She helped me with my course schedules until I declared my major.”
Brendan Kennedy of Charlotte said that first-year seminar class “showed me what college classes were going to be like. It laid a good foundation for me and showed me how it all would work.”
Matthew Blaker of Concord said Vandergriff-Avery’s first-year seminar class was “a gateway” for him. “I was a first-generation student and an only child. Dr. V-A help me out early on and through her, I met other professors and every professor was open to helping.”
Like Blaker, Brittany Allen of Tobaccoville was also a first-generation student and an only child. And like Motsinger, she had never flown in a plane until her seminar class made the trip to D.C.
“Growing as a person was my greatest accomplishment,” Allen explained of her time at Catawba. Because she was academically successful and “worked hard on her grades,” her next goal is to apply to attend physician assistant school, she said. “I’ll work as a CNA next year and apply for P.A. school the following year.”
In June of 2010, Catawba was one of 30 Council of Independent Colleges (CIC) member colleges and universities selected through a competitive application process to receive the grants called CIC/Walmart College Success Awards. Vandergriff-Avery’s first first-generation students were the first beneficiaries of a portion of the $100,000 award.
The grant period concluded in 2011 and then external and internal funding was utilized in 2012 and 2013 to continue taking students enrolled in the first-generation section of First Year Seminar to Washington, D.C.
In all, four different cohorts of first-generation students at Catawba have benefitted thus far from the opportunities the grant monies initiated. The grant allowed Catawba to enhance existing programs in three areas: training and developing faculty and staff who work with first-year students, the NextGen First Year Seminar section and targeted outreach to families of first-generation students.
Vandergriff-Avery noted that data collected about the last four years of NextGen First Year Seminar groups indicate that these students had a higher grade point average and higher retention rates than those of Catawba students who were in other First Year Seminars.
Vandergriff-Avery summed it up thusly: “A major goal of the NextGen Program was to help build first generation students’ social and cultural capital. After watching these students excel the last four years and engage in a wide variety of academic and cultural experiences, I know we were successful.
“I look forward to watching these students continue to build upon what they have already learned in the years to come,” she continued. “I am incredibly proud of all of them and it was an honor as a first-generation college graduate myself to work with them in the First Year Seminar, to serve as their first academic advisor, and to travel with them to Washington, D.C.”