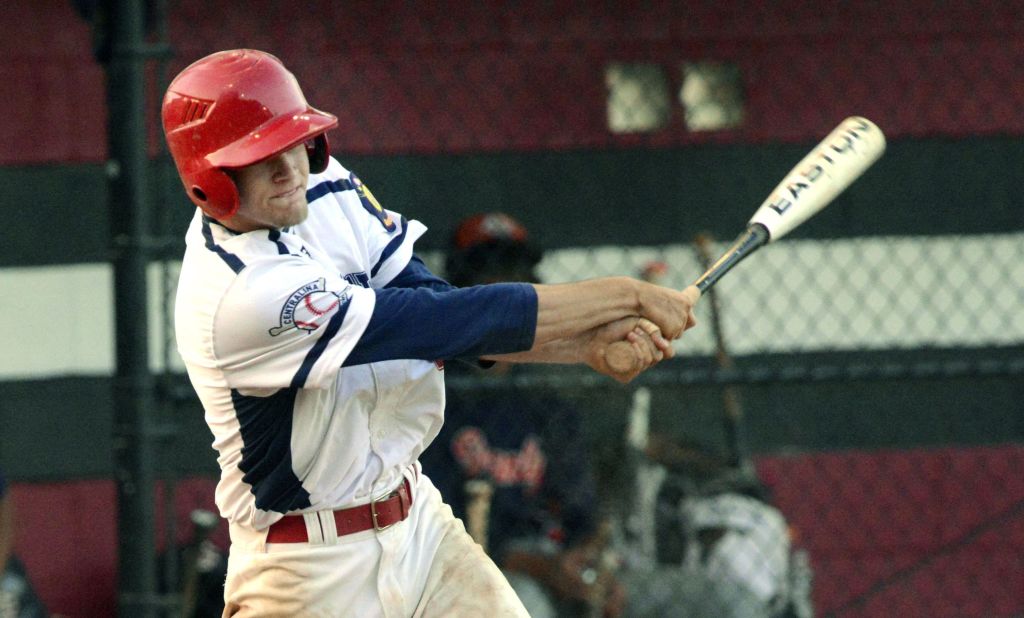 LANDIS — Southern Rowan’s 10 errors on Tuesday would’ve had coach Ben Hampton looking for a ledge to leap off of — except for one little thing.
Southern Rowan still won.
Southern took a 13-12 decision against visiting Stanly County that may have set the grand old game back a few centuries, but it also gave SR, the underdog, a 2-0 lead in an intense, first-round American Legion playoff series.
“It doesn’t matter what it looked like,” Southern hero Ben Gragg said with a shrug. “As long as you win, that’s all that really matters.”
Gragg was the winning pitcher, striking out the side in the top of the ninth. He scored the winning run in the bottom of the ninth, cruising home from third base when Colton Laws was struck by a pitch with the bases loaded.
“It was a curveball, and it got me right on the front foot,” said Laws, who accepted the strangest game-winning RBI of his career.
Had it been a boxing match, it would have been stopped by TKO after three innings. Stanly (10-15) led 6-0 at that point and Southern already had made five errors.
A pair of booted double-play balls gift-wrapped four runs for Stanly in the second, although SR lefty Blake Johnson didn’t let it bother him. The poised youngster just kept chucking — and he lasted into the seventh. By then, South had rallied for 11 unanswered runs.
Mostly it was little ball. Laws delivered the hit that put Southern on the board in the fourth against Stanly hurler Bryan Blanton, and Gragg’s bouncing two-run single up the middle keyed a five-run outburst.
Back-to-back bunt hits by Chandler Corriher and Gragg stirred up SR’s wild, six-run sixth.
“We were just kind of putt-putting along for a while,” Hampton said. “But then our bats broke out some.”
The key for Southern (9-11) was not packing it in when every groundball was providing an adventure for the crowd. Southern even lost catcher Matt Honeycutt, its only real catcher, when he reinjured a thumb, but outfielder Eric Stowe filled in admirably behind the plate.
“It was hard replacing Honeycutt,” Stowe said. “I did the best I could, and we all kept playing. We didn’t put our heads down when everything was going wrong. We realized we could win if we fought for it.”
Southern got offense from everybody. Stanly got a homer from Zac Almond. Both teams had 16 hits.
Southern took an 11-6 lead to the seventh, but Stanly scored twice. Chase Labbe’s RBI single in the bottom half gave Southern a 12-8 lead.
Stanly cut it to 12-11 in the eighth, and three different Southern relievers— Dylan Snider, Andrew Fulton and Laws — got an out apiece to escape. Laws wanted the ball when Stanly loaded the bases with two out, and he got a groundball to shortstop Owen White to preserve the lead.
Gragg fanned the side in the ninth, but Stanly still scored the tying run from third when Stowe had to throw the ball to first base to complete the out on a strike three that bounced.
Gragg doubled to start the SR ninth. When Bo Corriher reached base, John Daugherty’s sacrifice moved both runners. After an intentional walk to Labbe filled the bases, Laws’ HBP ended it.
“Usually, the scoreboard tells the story,” said Hampton, gazing out the big board in right field in disbelief. “But this was a contradictory game. Even with all those errors, this game said a lot about our will to compete.”