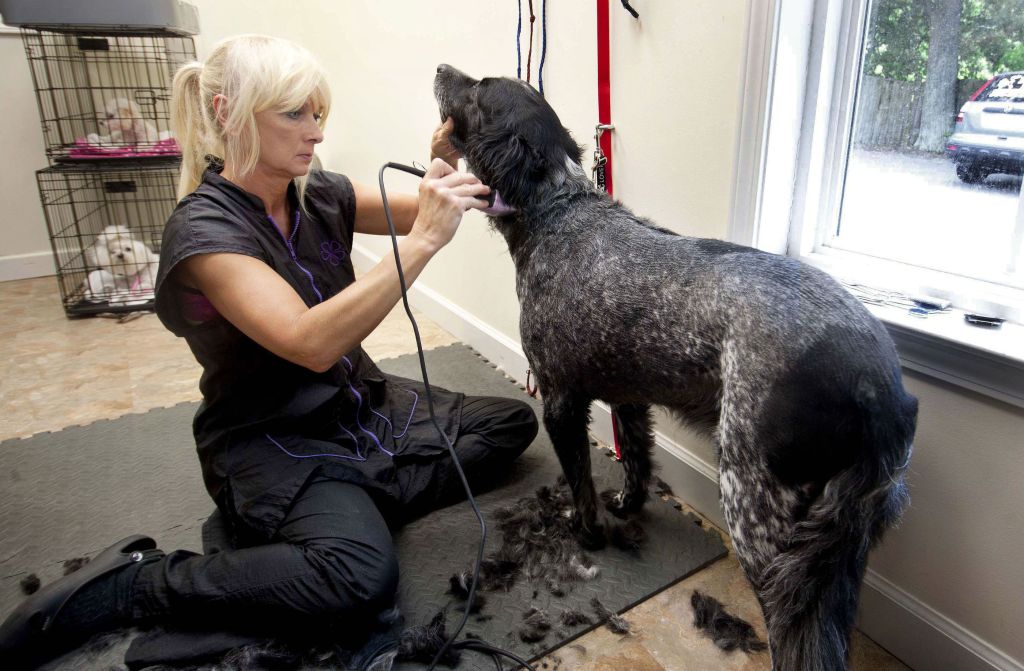 SALISBURY — If you’re feeling hot and sticky in this 90-degree weather with its high humidity, imagine how your furry pets must feel.
With the higher temperatures, more travel and the July 4 holiday coming up, area veterinarians and groomers have some tips to keep Barky and Miss Purr healthy.
It should go without saying, but vets say it every year: Do not leave your pet in a car with the windows rolled up. Even cracking the window is not enough. The interior temperature of a car, even on a relatively cool day, can become deadly in just 20 minutes.
Dr. Holly Hess, a veterinarian at the Animal Care Center of Salisbury, said dogs have more problems than cats, because people don’t usually take cats for a ride. Dr. Rebekah Julian of Lazy 5 Veterinary Hospital provided a link to a website that shows a veterinarian sitting in a car with the windows cracked for 30 minutes. The temperature reached almost 120 degrees.
Julian has been working with Salisbury on a solution for pets left in cars.
“I have seen a pet die at least one per summer and that’s only those brought in to us. The temperature inside your vehicle can rise almost 20 degrees in just 10 minutes. In 20 minutes, it can rise almost 30 degrees. On a 70-degree day that’s 110 degrees inside your vehicle and cracking windows makes NO difference to pets and minimal to people.
“I think with all our social media this is the best way to get information out. That is why so many veterinarians are taking videos and posting on Facebook and other sites.
“I do see people of all ages looking and talking about it. To me, I have had enough feedback it has already made an impact in the fact of discussing it more and making it more real to pet owners that this is a problem.”
To keep your dog from suffering in the summer, always provide fresh, cool water. “If at all possible, keep your dog in the air conditioning during hot weather and do not take them in the car if you are making frequent stops,” Hess said.
If you can’t bring your dog inside, make sure shade is available. “Please don’t chain or tether your dog. They need to be able to move around to find shade or the coolest temperature possible.”
Shaving long-haired or heavy-coated dogs can help. White dogs or cats are prone to sunburn.
Groomer Denise Youkers at The Gentle Groomer was shaving Wags, a blue heeler/lab mix one afternoon last week. He had plenty of fur, from nose to tail. As she shaved him, his spotted pattern emerged from underneath his hair. Wags looked like he was enjoying it.
Youkers said Valerie and David Steelmen are regulars who like to keep Wags clean and cool, and they were getting ready for vacation.
Waiting his turn was Rusty, a 5-year-old cocker spaniel. His boy, Sebastian Calloway, and Sebastian’s mom, Lisa, brought Rusty by for his summer trim.
Youker, formerly a beautician, said she has to be careful when shaving dogs. “You don’t want to pinch the skin under their arms, and you have to be extra careful underneath.” Most of the dogs she grooms are well-behaved, but some have spots they don’t want touched.
Hess and veterinarian Dr. Cynthia Almond of Rowan Animal Clinic said that any brachycephalic dog, such as a boxer, pug or Persian cats have extra trouble cooling off because of their compressed noses and a shorter trachea. Almond said dogs cool off by panting, and the short-nosed dogs can’t move enough air.
Hess and Almond also said dogs should not be exercised in the heat of the day. If you’re fool enough to go running at high noon, don’t make your dog suffer by bringing him or her along. Almond added that it’s best for dogs to walk on the grass, instead of hot pavement, to keep their pads from burning.
Hess said the signs of heat stroke include heavy panting, listlessness, the inability to get up, bright red to purple gums, vomiting and diarrhea. Extreme cases may involve seizures.
If your dog or cat is behaving that way, you must take it to a veterinarian immediately, the vets said. Go in an air conditioned vehicle and try to cool the animal down.
Cool a hot dog with wet, cool towels or rub them down with a cool cloth, hold a wet wrap around the neck and use alcohol to swab their pads, all to create evaporative cooling, similar to what humans do when they sweat. Dogs don’t sweat.
Don’t let the dog have large amounts of water to drink if it’s overheated — that can lead to vomiting — but give it cool water or ice cubes to lick.
Almond said rabbits are very sensitive to heat, as well, and need attention during very hot, humid days. “Cats are pretty good about finding a cool spot, and a lot of them are housecats.” Cats are also less likely to run out and play hard like a dog does.
Almond says water is the best fluid for dogs, and Hess agrees. Don’t give them human sports drinks — they aren’t losing minerals because they aren’t sweating.