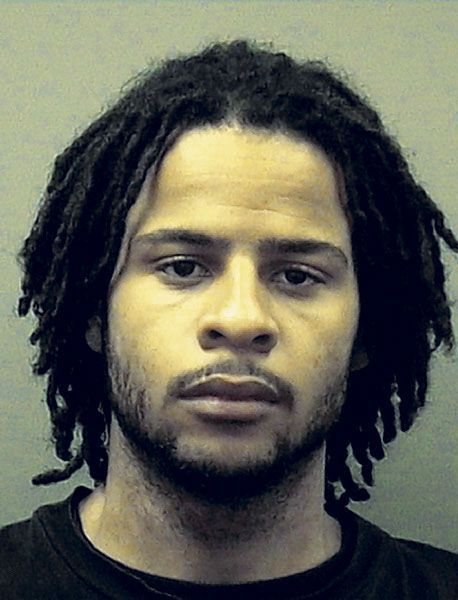 A seemingly remorseful Terrell Bowman, turned to apologize and ask for forgiveness from the family of the man he was convicted Monday of killing nearly four years ago.
Bowman, 23, accepted a plea to second-degree murder in the shooting death of Dwante Patterson. Bowman will spend a little more than 10 years to just over 13 years in prison. He has been in the Rowan County Detention Center under no bond since his December 2011 arrest.
Rowan District Attorney Brandy Cook and Assistant District Attorney Tim Gould each recounted the events that led to Patterson’s death during a Monday afternoon hearing before Superior Court Judge Mark Klass.
Patterson and Bowman argued at the Mildred Avenue home of Wendy Lilly, the mother of three of Patterson’s 13 children. Bowman, at the time, was Lilly’s boyfriend of 10 months.
Patterson’s longtime girlfriend, Julia Medrano, drove him to the home to pay for a babysitter. Witnesses, including Lilly, and some of the children that were at the home, told police Patterson was upset that Bowman struck Patterson’s daughter in the face. Lilly kicked Bowman out of her home a week before the shooting, but allowed him to return the day before. Bowman’s attorney, James Randolph told the court Bowman was disciplining the child because she was being disrespectful.
The two men pushed each other, but it wasn’t clear who began the shoving. Lilly’s statement to police was that she never saw Patterson with a gun. Medrano repeatedly begged Patterson to just leave the house, Cook said.
Bowman went into a back bedroom and Patterson followed all the while warning Bowman not to touch his children. Bowman shot Patterson in the upper back, it appeared as Patterson was walking away. Patterson ran out of the house, stumbled on the street and ran toward Vance Avenue. Bowman ran after him, according to his attorney, firing a few other “warning” shots. Those warning shots struck a sign.
Patterson was struck once in the back, an autopsy report revealed, and he later died at the hospital.
Drew Charleston, a friend of Bowman’s told police he believed Patterson was the aggressor in the argument, but he also said, he believed Patterson was preparing to leave before he was shot.
Cook said Patterson’s family believes the situation escalated because he was intoxicated. A toxicology report said his blood alcohol content was .18, more than double the legal 0.08 limit.
Randolph said Patterson showed up unannounced and uninvited to Lilly’s home and began threatening his client. He added Bowman believed Patterson had a gun.
“It was never his intention to kill anybody. It’s a tragic situation for everybody,” Randolph said.
Bowman jumped into a waiting car and tossed the gun, a Smith & Wesson, out the window. He turned himself into authorities the next day.
The gun was recovered the day after the shooting in the yard of a Wiley Avenue home. The property owner contacted police after he found the gun. He removed it because there were children in the neighborhood the man told police.
“To say I’m simply sorry would be an understatement,” Bowman said, facing Patterson’s family.
He asked Patterson’s family to forgive him and apologized for the hurt he caused.
“I pray to Allah that you find it in your heart to forgive me,” he said.
Barbara Maxwell, Patterson’s mother, said Bowman took someone who was precious to her. She said her son’s death has changed the lives of his children, two of whom she said have joined gangs.
“I can’t hear his laughter. I can’t see his face,” Maxwell said through tears.
She said it seems like only yesterday he was killed. She wished Bowman the best, but said he took away a big part of her family’s life.
Medrano, also has three children with Patterson, and said she doesn’t believe Bowman is sorry for his actions. She pleaded with him to “tell the truth.”
“My kids do not have a father,” she said.
She said her life has been flipped upside down.
“All I’ve gained is heartache,” Medrano said.
Tameka Patterson, the sister of Dwante, told the court she struggled with her brother’s death.
“I understand your apology, but at the same time, we have choices,” she said.
Patterson denied her brother would’ve had a gun, but admits he would’ve fought back.
She told Bowman she hopes he comes out a changed man.
“It’s sad because you haven’t even begun to live,” she said.
Tracey Oglesby and her daughter, Tequila, both said they were pleased with the sentence and felt justice had been served.
“We knew Dwante. I’m very sorry for the family,” Tracey said.
Tequila said she felt it was best that both families start to move on. She said she prays that Patterson’s family would find strength.
Currently, there are 16 others in the Rowan County jail awaiting trial for first-degree murder, two more are in the jail for attempted murder charges.
Contact reporter Shavonne Potts at 704-797-4253.

Al Elliott parked his car on the edge of fresh asphalt. Just beyond the hood of his Saturn, three red... read more