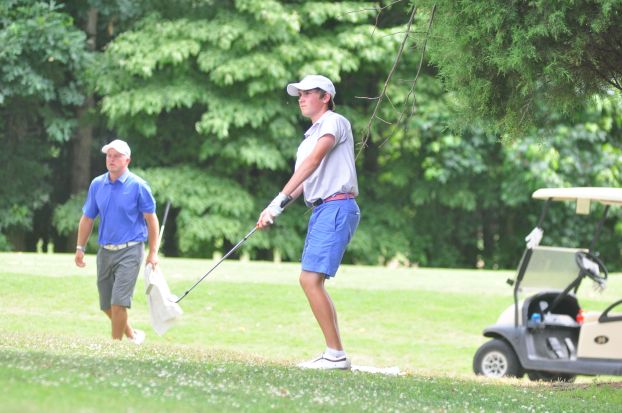 Michael Childress donned a Duke polo shirt and Duke visor during Round 1 of the Rowan Masters.
That’d make him unpopular in some circles, but he’s earning the right to be bold and gain his own fans in the process.
The 14-year-old is about to enter high school and was shooting the breeze with folks twice his age at The Warrior Golf Club this weekend.
Childress is the youngest to ever qualify in the 11-year history of the tournament and his run to the final eight is the story of the weekend. Not that it was unexpected.
Those who’ve followed the local golf scene have known about Childress for a while now. He’s posted competitive scores in statewide tournaments and helped Sacred Heart Academy win conference tournaments. An even par 35 in the conference championship match this year helped get folks’ attention.
Childress got the Blue Devil garb after attending a golf camp at Duke, where he learned about golf’s place in the world. As vital as it is to Childress, there are more important things.
“I think everybody gets frustrated with golf and I’ll admit to that,” Childress said. “At Duke camp, there was a guy who was a really good golfer and he had his arm amputated. It really puts things in perspective that it’s nice to play good golf and get the results, but there’s a lot more important things than golf in life. I try to keep that in my mind whenever I hit a bad shot.”
He plans to play in the Labor Day Four-Ball Tournament at Country Club of Salisbury as well.
“It’s a great learning experience to play with better players,” said Childress on Friday. “I feel like I can make a statement here, but I’m also the low man on the totem pole and I need to prove myself.”
Saturday saw another step in Childress’ journey as he advanced past Nate Jessup, reaching the quarterfinals. Seven-time Masters champion Keith Dorsett knocked out Childress in the quarterfinals, but needed a playoff hole to do so.
“That kid’s gonna go places,” Dorsett said. “He’s way ahead of where I was at that age. He doesn’t make many mistakes.”
Childress just graduated from Sacred Heart and will attend Cannon School in Concord next year. Cannon is a perennial top-5 finisher in the NCISSA 3A state championship. The boys placed third last year and the girls team has won three consecutive title.
“I’m gonna miss my friends,” Childress said. “It is a tremendous opportunity to progress as a golfer and even more as a young man.”
Childress’ dad, Jeff Childress, is the longtime tennis coach at Catawba. Two of his uncles played college basketball, one at Campbell and one at East Carolina.
Tennis was the go-to sport before his family moved out near the country club. Richards discovered the fun of golf and it hasn’t stopped.
Although he’s garnered attention across the area, he’s maintained poise, not missing the forest for the trees.
“I’ve come to realize that I’ve progressed pretty well,” Childres said. “I’ve still got a long way to go. I think at this rate I can keep getting better and potentially be a pretty good golfer.”
He’s not the only one.