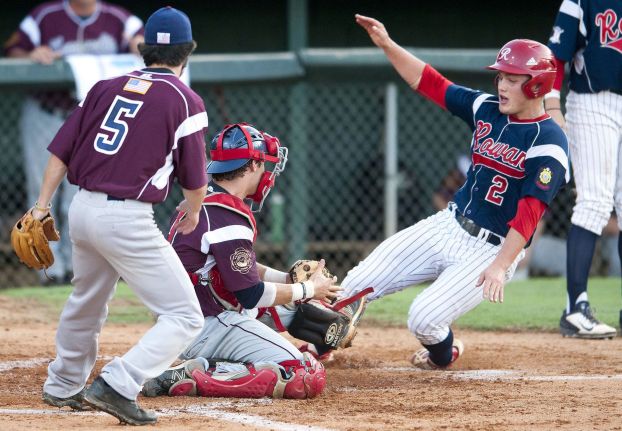 SALISBURY— It was not a thing of beauty or a work of art but the Rowan American Legion team did what was necessary to clinch a Division championship Wednesday night at Newman Park.
In a slow paced game that Coach Jim Gantt likened to “watching paint dry,” Rowan pulled away from Kannapolis Post 115 in seven innings, 11-1, claiming the top seed in the Southeast division of Area III in the process. The win upped the team’s record to 16-5 overall, 6-1 in the division with one regular season game left at Concord Post 51 tonight.
The pace of the game was affected by the 13 combined walks issued by the two teams, 11 full counts and a couple of hit batters. To Rowan’s credit, however, the players pounded out 13 hits, played flawless defense and got a solid relief effort from side-winding right-hander Alec Hamilton to put away the game.
Hamilton came on in the fifth for starter Chase Jarrett and limited Post 115 to two hits and one run while walking a pair. He improved to 2-0 in his first Legion season .
“Alec lost the strike zone there for a couple of hitters,” Gantt said, “ but otherwise he threw strikes, changed speeds and got ground balls. That is all you can ask of any of our pitchers.”
Jarrett limited Kannapolis (8-10, 2-5) to just two hits as well and no runs but got himself into numerous jams with five walks and a hit batter. Ultimately his pitch count did him after four.
Pitching was a significant factor for Kannapolis as well, especially the lack of a reliable reliever in the decisive seventh inning when starter Philip Faggart just ran out of gas. The Northwest Cabarrus product kept his team in the game through six innings but it all came unraveled in the seventh for the visitors.
Rowan led 4-1 as the seventh opened then produced one of those offensive explosions that has been commonplace this season. A dozen batters paraded to the plate, scoring seven runs on four hits and 5 walks off three Post 115 hurlers.
The final blow came off the bat of Chance Bowden with the bases loaded and two outs. The big first baseman crushed a liner to left to end the game and cap a night where he went 3 for 5 with three RBI. Michael Caldwell, who had a double in the big inning had two hits as did Riley Myers and Luke Setzer. But Caldwell agreed that the pace and the nature of the game was affected by all of the free passes.
“Not to throw anybody under the bus, “ he said,” but if you can’t fill up the strike zone it is going to take a while to play. But we are always good hitting team and it showed tonight in the end.”
Kannapolis was hampered by the lack of pitching depth due to a condensed division schedule in the past week. “Not making any excuses but after playing seven games in five days we were at our bare minimum in pitching,” Post 115 coach Joe Hubbard noted. “I thought Phillip did a great job on the mound. He stayed in there and battled but just ran out of gas.”
Faggart started the seventh followed by Justin Dixon and finally Zack Mullinax. Between them they could not secure the third out as Rowan won by the 10-run rule for the fifth time in seven division games.
Rowan opened the scoring in the second on three hits including a double by Myers. A sacrifice fly by Dustin Ritchie made it 2-0. They added two more in the third on four consecutive singles and some bad relay throws by the visitors.
Kannapolis mounted a serious threat in the fourth on a single, a hit batter and a walk but Jarrett left the bases full with a key strikeout. Post 115 finally broke through in the top of the sixth off Hamilton as DH Christian Griffin drove a double to deep center then scored on a ground out.
It would be their final threat of the game as Rowan closed it out with their seventh inning explosion.
Rowan will be at Central Cabarrus tonight to play Concord Post 51 and to try and avenge their only division loss this past Tuesday.
Connor Johnson will be the starter but will be on a limited pitch count since he will also open the best-of five play-off series for Rowan next Monday at Newman Park. Rowan will face the fourth place Southeast division team in the first round.
NOTES: The final home regular season game at Newman Park was also a chance for the Legion organization to offer a special salute to Pinkie Trexler for his many years of service to the baseball program. His famous original pinkie dogs were on sale during the game. Dr, Clyde Young, a fixture at the park for many years with his trumpet was also honored in the pre-game. See story on 1A.