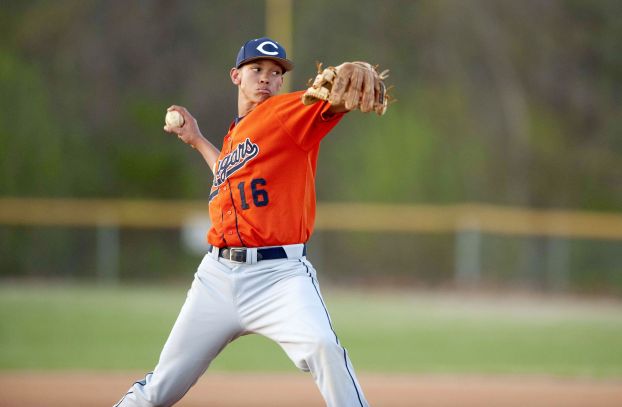 CHINA GROVE — John Daugherty’s junior season at Carson was so spectacular that there was no way he could duplicate it as a senior.
It was like that next speech Lincoln had to make after the Gettysburg Address, and Daugherty’s batting average skidded from a sizzling .431 to a routine .322.
Daugherty had come out of nowhere as a junior and shocked people, but as a senior everyone was ready for him. He was circled on every scouting report. There were no more fastballs down the middle.
“I saw a lot of curveballs and just about every pitch was away,” Daugherty said. “They did pitch me a lot different as a senior, but I still thought I hit pretty good.”
Daugherty, Mark Norris Memorial Award winner as the county player of the year in 2013, was merely all-county in 2014, but the thing that got overlooked was that while his offensive numbers dropped, his pitching numbers didn’t. It was mostly those pitching numbers that carved out his spot on the 19-man all-county team.
“He didn’t have the year offensively he had in 2013, but he still led us in RBIs, and that says a lot about him,” Carson coach Chris Cauble said. “As far as the mound, he equalled what he did as a junior.”
Over the last two prep seasons, there hasn’t been a better two-way player in the county than Daugherty, who went 15-4 on the bump, with five saves, while driving in 47 runs and batting .368.
He’s decided to attend Catawba Valley Community College in Hickory. He’ll join Carson teammates Dillon Atwell, a fellow right-hander, and catcher Bryson Prugh at CVCC.
“I had looked at Pitt and Guilford Tech as well, but I really liked Catawba Valley, especially when it was a chance for Dillon and I to keep playing there together,” Daugherty said. “It’s close, I like the school, and the coach (former Lenoir-Rhyne coach Frank Pait) is cool.”
Cauble didn’t rush Daugherty. He kept him on the jayvee team two seasons and gave him a chance to develop at his own pace. Cauble knew he’d be ready to help the varsity as a junior, but no one, Cauble included, expected him to become a rock star.
“John just kinda burst on scene and had a fantastic year pitching and hitting,” Cauble said. “We thought he might be good, but we had no idea how good. He hit so well we had to find a place for him in the lineup. He’s best defensively as a first baseman or outfielder, but we had a lot of outfielders (Dylan Carpenter, K.J. Pressley, Ben Gragg), so he usually played third base.”
At 6-foot-4, 190 pounds, Daugherty has the prototype pitcher’s body. He’s long, lean and athletic and probably could have held his own as a forward if he’d focused on basketball rather than baseball.
He went 8-1 on the mound as a junior with an ERA barely above 1.00. At the plate, he batted .431 with nine doubles and 27 RBIs.
Pitching as a senior, his record was 7-3, but he fired three shutouts and essentially had a fourth shutout when he relieved in the first inning and didn’t allow a run the rest of the way.
Carson didn’t score a lot, so constantly hurled under pressure. He was the victor in two 1-0 games, and he nearly pitched a perfect game in a 2-0 road win against Southern Guilford in the second round of the 3A state playoffs.
“I was on that night and the defense was good behind me,” Daugherty said. “That was the highlight of the season.”
While the perception always was that Daugherty was Carson’s No. 3 arm behind ECU signee Colton Laws and Atwell, who set the school record for career win with 25, Daugherty would’ve been the ace at a lot of places.
“John came up to the varsity later than Colton and Dillon, so he kinda took a backseat to them,” Cauble said. “But he was a great pitcher for us. He put up some phenomenal numbers in his career.”
Daugherty isn’t sure yet if his two-way career will continue at the college level, but he has the talent to make it either as a pitcher or an outfielder.
“Every time a coach or scout came to Carson, they asked about John as soon as they saw him,” Cauble said. “As long he takes care of the classroom, he’s going to have some opportunities to keep playing baseball. Two years from now, he can be moving on to a four-year school.”

GRANITE QUARRY — Bradley Newsome is 5-foot-7, 150 pounds, so it’s not like recruiters lined up outside the East Rowan... read more