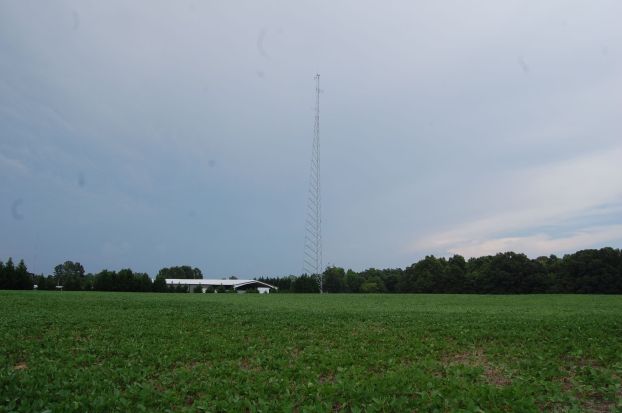 New tower on NC 152 to beef up coverage area

Standing 300-feet tall behind the county’s emergency medical services base on N.C. 152, a recently erected communication tower is getting closer to going online with each passing day.
Once live, the newest addition to the county’s communication network behind Station 82 will greatly improve radio signals in the southern areas of the county for all types of agencies tapping in.
The boost will allow first responders, law enforcement and municipal public works groups to operate more efficiently and have coverage even in the farthest stretches of the county.
County officials anticipate bringing the tower onto the grid in the next month, once Duke Energy finishes routing power to it.
“(Construction crews) started looking at the layout and orientation for the tower on Jan. 27. They were drilling holes for the tower at the very end of March,” said Rob Robinson, director of E-911 and telecommunications.
The tower handles all of the radio equipment for the public safety needs, Robinson said.
Construction of the new “152 site,” as Robinson calls it, allows for a greater coverage area as well as accessibility to the 20 channels the county constantly is running between the different towers located east to west.
Outside of the original, city-owned tower at Al’s Knob in Granite Quarry, the county needed additional towers to expand coverage out to the far ends of the county.
The county currently is renting space on a tower site in Cleveland at Young’s Mountain and has plans to be part of a Voice Interoperability Plan for Emergency Responders, or VIPER, tower site down in High Rock, which will be set up and run by the state.
“When you get way out into Enochville, the radios are so weak that they are not strong enough to hit the Granite Quarry site,” Robinson said. “When we put up microwaves and link those three other sites together, we’ll have four big sites that are all connected instead of one (at Al’s Knob).”
The purpose of the radio upgrade, Robinson said, was to improve radio coverage, which he said was “horrible” in the county.
“The second thing we did is upgrade everything in our infrastructure because all of our equipment was analogue and it was becoming outdated,” Robinson said. “Motorola had stopped making analogue parts. As things break over time, it got to the point where we couldn’t find repair parts. We had to go to digital in order to get the new technology.”
Robinson said the county did everything it could to cut down costs on construction of the new tower.
The tower came in at under $500,000 turn-key, Robinson said.
“We bought a refurbished building from somebody and spent less than $10,000. Usually these tower site buildings range anywhere from $40,000 to $100,000,” Robinson said. “We bought a used generator. Instead of spending $40,000 on a new one, we got one for under $10,000. We did things to try and save money on this project. We didn’t just go out and be flagrant with the taxpayers’ money.”
With a tower of its own, the county now has the option of leasing out space on the structure and possibly recouping some of the initial cost.
“These things will be here forever. Once you put them up, they are vertical real estate,” Robinson said. “We may have a cell vendor that wants to put their stuff on our tower at some point. You don’t ever lose when building a tower. It could actually make money at some point in time.”