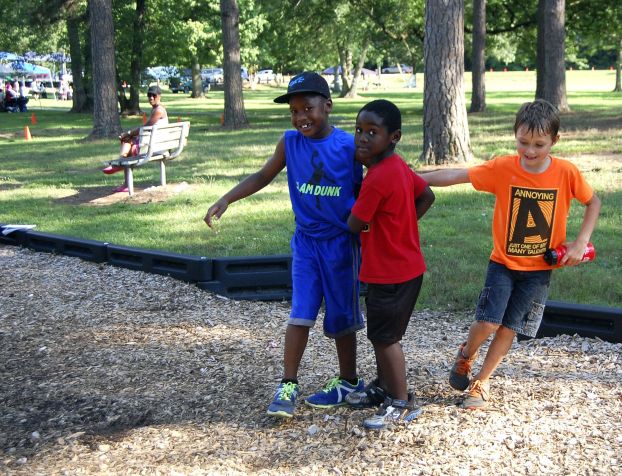 Small but enthusiastic crowd turns out for Juneteenth

SALISBURY — Isaan Medlin and Precious Ramsey-Greene, both 4 years old, stole the show Saturday at the 20th annual Juneteenth celebration at Kelsey Scott Park.
The littlest members of the St. Luke’s Youth for Christ praise dancers, Medlin and Ramsey-Greene performed with emotion and precision as they moved and swayed to the music. A small crowd cheered and applauded at the end of the performance, which featured handheld fans as props and several solo dancers.
The dance troupe from St. Luke’s Baptist Church on Hawkinstown Road in Salisbury was one of a few groups that performed at Juneteenth. Organizers said they were competing with several other events going on simultaneously across the city and did not have their usual turnout of gospel groups.
Connie Campbell and Jill Burch said they hope more organizations and vendors will participate next year. Plans are underway to create a Juneteenth nonprofit steering committee that would organize and host the annual observance, Burch said. Anyone interested in serving on the committee should contact her at 704-754-8975.
“People come out to learn more about our history and fellowship,” Campbell said. “It’s a chance to meet different people.”
This year’s event was sponsored by the Vashti Chapter No. 122 of the Order of Eastern Star and King of Ahaseurus Chapter No. 127.
Juneteenth marks the day — June 19, 1865 — when Union soldiers landed at Galveston, Texas, with news that the Civil War had ended and enslaved people were free. It took two and a half years for word to reach Texas that President Abraham Lincoln had signed the Emancipation Proclamation. Forty-two states now observe Juneteenth, including North Carolina.
There are several possible explanations about why it took so long for word of emancipation to reach Texas, according to the website www.juneteenth.com. Some say a messenger with news of freedom was murdered on his way to Texas.
Others say the news was deliberately withheld by the enslavers to maintain the labor force on the plantations. Yet another explanation says federal troops actually waited for the slave owners to reap the benefits of one last cotton harvest before going to Texas to enforce the Emancipation Proclamation.
All or none of the versions could be true, according to the website.
The word “Juneteenth” was coined as a combination of “June” and “nineteenth.”
Contact reporter Emily Ford at 704-797-4264.