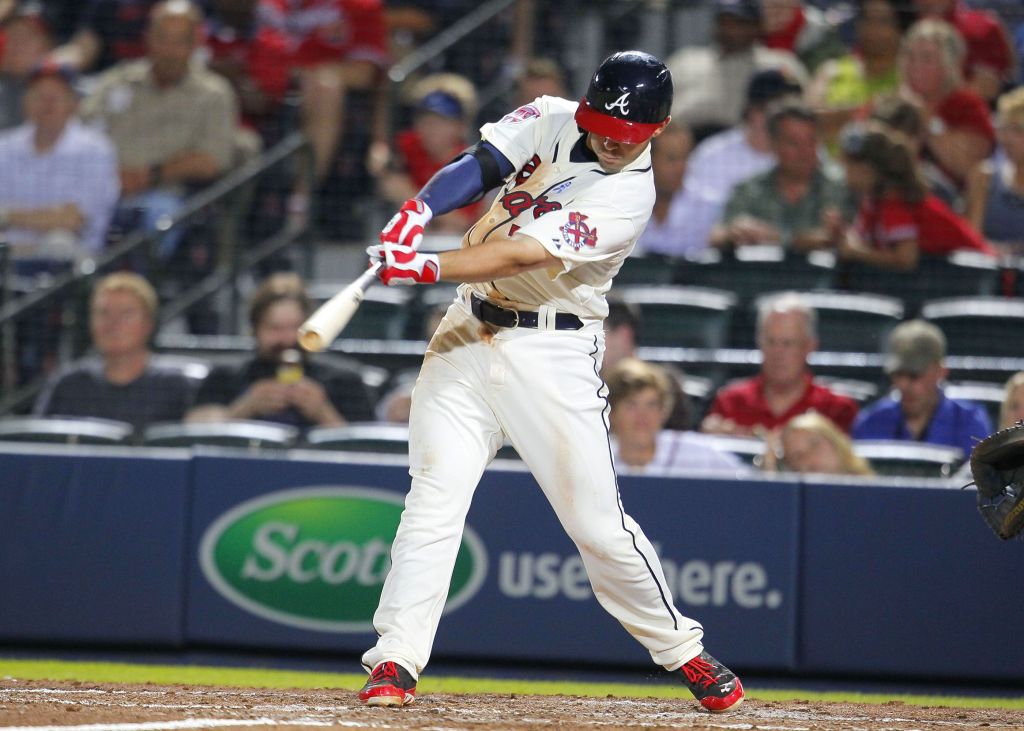 ATLANTA (AP) — Tommy La Stella had three hits, including a two-run double in Atlanta’s four-run sixth, and the Braves beat Hector Santiago and the Los Angeles Angels 7-3 on Sunday night.
La Stella, the rookie second baseman, is hitting .411 with at least two hits in nine of his 16 games.
Evan Gattis and Justin Upton also had run-scoring singles in the sixth as the Braves rallied against Santiago (0-7) after trailing 3-0. Jason Heyward hit a homer in the seventh and made two strong defensive plays in right field to take hits away from Mike Trout.
Trout had three hits, including a homer. Erick Aybar also homered for the Angels before leaving the game with a sore left hip.
Anthony Vavaro (2-1) had three strikeouts in two perfect innings.
The Braves moved back into first place in the NL East by winning two of three from the Angels, who remain in second in the AL West.
David Carpenter gave up a single to Trout before hitting Albert Pujols with a pitch with one out in the ninth. Craig Kimbrel struck out Josh Hamilton and Howie Kendrick for his 20th save.
Santiago, trying for his first win of 2014, allowed only one two hits through five scoreless innings before fading in the sixth. He allowed four runs on five hits and two walks in 5 1-3 innings.
Atlanta’s Mike Minor matched his career high by allowing 11 hits for the second straight game. He gave up three runs in five innings.
With one out in the sixth, B.J. Upton walked and moved to third on Freddie Freeman’s single to centerfield. Gattis extended his hitting streak to 15 games with a run-scoring single to right field. Freeman scored on Justin Upton’s infield hit that David Freese couldn’t handle at third base.
Chris Johnson’s single off Kevin Jepsen loaded the bases to set up La Stella’s two-run double to right-center. Johnson was thrown out at the plate.
Aybar hit his fifth homer to lead off the second. He reached on a fielder’s choice grounder in the third before being removed from the game in the bottom of the inning. John McDonald took over at shortstop.
The Angels provided no immediate additional details on Aybar’s injury.
Trout raced in to make a tumbling catch of B.J. Upton’s sinking liner to end the third inning.
Heyward took a hit away from Trout with a similar catch in the fourth. Heyward again denied Trout of a hit in the sixth. Sprinting toward the wall, Heyward jumped and reached up at the warning track to catch a long fly ball before running into the wall.
Heyward hit his eighth homer off Cam Bedrosian. B.J. Upton singled, stole second and scored from third on Bedrosian’s wild pitch.
NOTES: The Angels placed RHP Fernando Salas on the 15-day DL with right shoulder inflammation. Salas (4-0) pitched two scoreless innings to earn the win in Saturday night’s 11-6 win over the Braves in 13 innings. RHP Dane De La Rosa was recalled from Triple-A Salt Lake and pitched the eighth. … Trout had seven hits, including two homers, and drove in five runs in the three-game series. … The Braves signed OF Braxton Davidson, the team’s first-round pick from Arden, North Carolina. … The Braves open a three-game home series against Philadelphia on Monday night when RHP Julio Teheran faces LHP Cole Hamels. The Angels open a four-game series at Cleveland with RHP Jered Weaver matched against RHP Trevor Bauer.