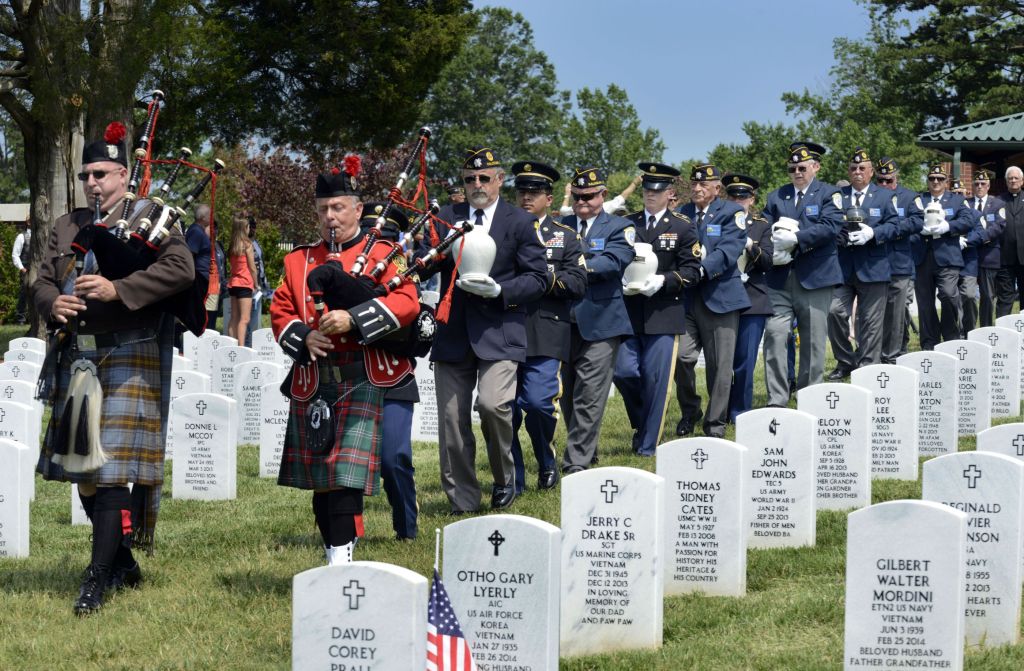 Connie Adams, originally from Greensboro, lives at the North Carolina State Veterans Home just next door to the Salisbury National Cemetery. He got his son-in-law, Frank Bennett, to bring him over for the “You Are Not Forgotten” Ceremony on Saturday morning. The cremated and unclaimed remains of 15 veterans were interred with full military rites during the service. Adams completed three active tours in Vietnam, and knew the importance of the service. Though no one had claimed these remains, he didn’t want them to be buried alone and neither did about 300 others who attended the service. Adams said, “It is important to be here.” That simple statement summed up the thoughts of many on the beautiful Saturday morning.

At a little before 11 a.m., the remains of 15 veterans, many of whom had served in World War ll, Korea, and Vietnam, were unloaded from a hearse, catalogued and respectfully placed in the shelter at the cemetery. An American flag accompanied each veteran as current and former members of service carried the urns. A gentle breeze caused numerous additional flags to flutter in the breeze as a short but moving service began.

John McColley, a North Carolina Missing in America Project volunteer, welcomed everyone. Sherry Yetter, sang the National Anthem. Following the Pledge of Allegiance, Chaplain and MIAP volunteer Reverend W.D. Sirginson gave the invocation. He asked that all in attendance remember that their freedom was purchased by these veterans that we are now assembled to honor.

Donald Owens, Salisbury National Cemetery Director, told everyone that 2200 veterans were interred at this cemetery and that now 15 humble men and women would be added. Owens said, “None of them served for glory though they did serve for the freedom that makes us who we are.”

Guest speaker, the Honorable Steve L. Muro, Under Secretary for Memorial Affairs, National Cemetery Administration, said, “These veterans never thought that one day their remains would be unclaimed. The first National Cemeteries were opened 150 years ago, and now they will be here forever. Every headstone tells a story. Please take time to thank those in uniform whenever you see them. And remember, we are borrowing this land from our future generations.”

A moment of silence, a rifle salute, and Taps followed. Don Reid, another MIAP supporter, read all the names along with their branch of service. Rev. Sirginson gave the benediction, reminding everyone of the tradition of leaving a coin at the veteran’s gravesite. Leaving a coin means that someone has visited and wanted to pay their respects.

The urns were then solemnly marched to the individual gravesites and placed in the graves, marking the close of the service.

The Missing in America Project, Veteran Recovery Program works to locate, identify, and inter the unclaimed cremated remains of American veterans through the joint efforts of private, state and federal organizations. At the same time, the project works to provide honor and respect to those who have served this country by securing a final resting place for those forgotten heroes.

During the service, Salisbury resident Lucille Baity was presented with a folded American flag. Her son, Stacey Lynn Mullis, is interred in the cemetery. Baity donated a large wreath to honor the veterans interred Saturday. She said, “My son died last year, and I miss him every day. He has only been gone a year, but each time I visit his gravesite, I leave another piece of my heart here.”

Noting the large crowd on hand, Baity continued, “Getting the flag in the service was one of the proudest moments of my life. I am so thankful to everyone who attended. Just look at all of us. It was such a beautiful service.” Baity went on to tell that her son was a jet mechanic in the US Air Force, serving for 12 years.

Veterans can be buried free of charge in National Cemeteries. Salisbury National Cemetery Program Support Director Allie Gennusa said, “We were honored to have this service here today. The bodies were collected at a funeral home in Greenville, NC and transported here. Each veteran’s remains can get $10,000 worth of free services. Scheduling is done from St. Louis, Missouri. We have funerals here Monday through Friday, every hour on the hour, from 10 a.m. to 2 p.m..”

The remains interred today were part of an extensive three month planning process. It was all finalized today when the tag on each urn was verified at the hearse, on the table and again before interment. The tag includes the name, date of interment, and other required information. Gennusa said, “We have a staff of 12 that worked tirelessly for two weeks to make this day of honor perfect. We want people to know that we are here and that our services are available.”

Members of the Patriot Guards were on hand as well. With about 8,000 members in North Carolina, the Patriot Guards exist primarily to attend funerals of fallen heroes, both veterans and service workers such as police or fire personnel. State Captain Keith Arbuckle said, “For homeless vets, we are their family. We want to give honor and respect with dignity. Especially for veterans without family, what we do makes a difference.” Arbuckle wanted to let people know that Dignity Memorial exists. Dignity Memorial is a network of funeral, cremation, and cemetery service providers that assists with preparation, coffin and transportation for unclaimed veterans.

Others who had a part in the transportation of the remains or the ceremony on Saturday were Rouse Mortuary Service and Crematory of Greenville, North Carolina National Guard Military Honors Funeral Program, Rowan County Veterans Honor Guard, Pitt County Sheriff’s Office and the Greenville Police Department. Rolling Thunder and various historical military vehicles were on hand also.

Lucille Baity said, “Everybody needs somebody to care. These are our heroes. They deserve this chance of peace and rest.”