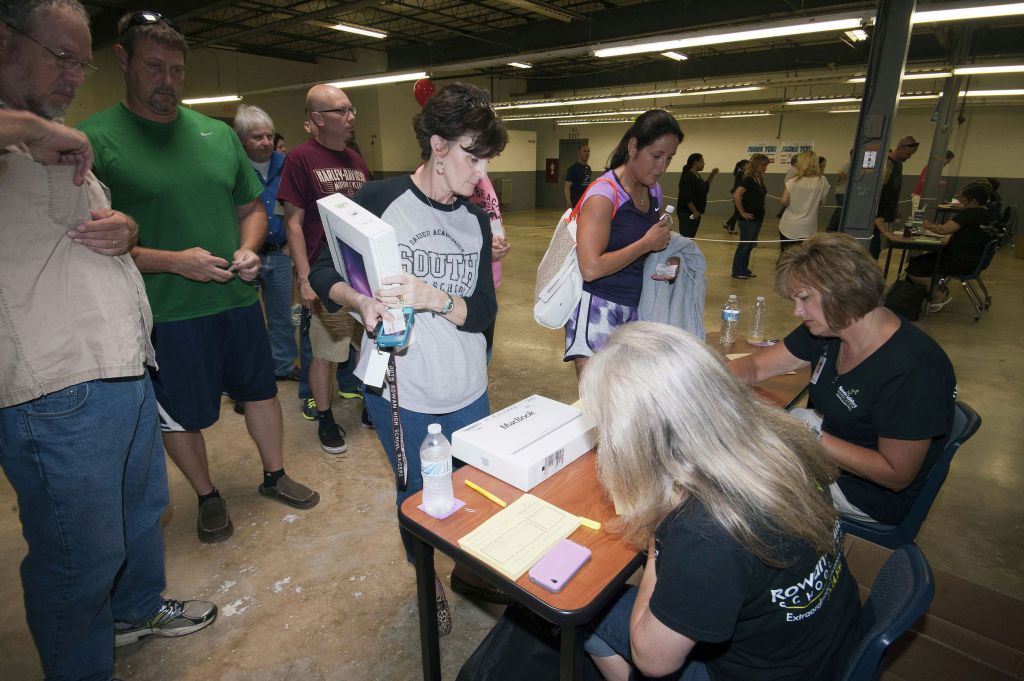 School may be out for the summer, but Rowan-Salisbury teachers went on a field trip of their own Friday.
While the destination — an un-air-conditioned warehouse on Long Street — might not seem glamorous at first, teachers couldn’t contain their excitement as they piled off of the buses.
Some of them entered carrying antiquated laptops, but all of them left with brand new MacBook Air laptops.
The event was the first of a four-phase one-to-one digital conversion plan that will provide all Rowan-Salisbury teachers and third- through 12th-grade students with digital devices to use at school and home throughout the school year.
High school students will receive their laptops sometime in the fall. Middle school students will receive iPads sometime this coming winter, and third- through fifth-graders will receive theirs in the spring.
Talitha Lowman, a math teacher at South Rowan High School, was one of more than 1,000 Rowan-Salisbury teachers who attended the district’s laptop deployment celebration Friday.
Director of Digital Innovation Andrew Smith said 80 volunteers distributed 1,128 MacBook Airs between 7:45 a.m. and 3 p.m. Friday – approximately three per minute.
When teachers entered the warehouse, they formed three lines. Lowman found herself in the middle line, where she checked in with a district employee, turned in her old laptop and filled out some basic information on a green ticket she was given.
Next, she was handed a bag with information about the district’s new literacy framework and professional development websites and how to share digital conversion stories on social media.
Teachers of kindergarten through eighth grade also received a book on literacy.
When Lowman approached the next station, she was met by Eisa Cox, director of secondary education.
“By printing and signing here, it shows you agree to the user agreement,” Cox said. After signing the agreement, Cox handed Lowman her brand new MacBook Air laptop, charger and a dongle.
Lowman said her laptop is smaller than she expected.
“That’s a good thing,” she added.
Lowman copied down the asset tag, or identification number, off the laptop onto her ticket, then Cox stamped the ticket and sent Lowman on to the next room.
On one side of the room, technology facilitators from different schools sat at tables, where teachers joined them to set up their computers.
Smith, the director, said this is “where the magic happens.”
Grant Deaton, a technology facilitator at Salisbury and East high schools, greeted Lowman and several other teachers as they gathered around his table.
“Open it up and turn it on,” he told them.
“All right, it’s on,” Lowman said.
Deaton walked the teachers through a five- to 10-minute set-up process, where they selected the language, selected a user name and password and logged into their Apple ID accounts.
“Any time you install anything, it’ll ask for this password,” he said, as he explained that the teachers were not only allowed, but also encouraged to use the computer as a personal device in addition to a professional one. Teachers are allowed to download applications that are in line with the user agreement they signed.
“Oh my gosh! You mean you’re going to treat us like adults?” Lowman joked.
“It’s what we’ve been asking for for years,” Deaton said. “You can pay for them, or, there’s a lot of free ones. I personally like the free ones.”
He also helped the teachers to sync the laptop using their Rowan-Salisbury credentials so they can connect to wi-fi in their schools and other district buildings.
After the teachers finished setting up their laptops, Deaton sent them off to the next station on the other side of the room with warm wishes for a great summer.
At the next station, teachers enrolled in a management system that allows district technology officials to “rain down apps” from the cloud, or remotely install mandatory applications, on the teachers’ laptops, Smith said.
Finally, Lowman and her fellow teachers were released to the “celebration area,” where school board members Susan Cox, Jean Kennedy and Josh Wagner applied stickers with the district’s new logo to each laptop.
“Well, I guess that’s the end of the line,” Lowman said after she received her sticker — but it wasn’t.
Popcorn, water and a variety of other snacks were awaiting teachers at the end of the process.
Lowman said everything “was a lot more organized” than she thought it would be.
“I’m amazed at how many people it takes to pull this off,” she added.
Lowman also admitted that she hasn’t always been a Mac person.
“I like it now. I’m a convert,” she said.
South Rowan Teacher of the Year Brett Stirewalt said that the laptop deployment was “awesome.”
“It was so quick,” he said.
While he said he’s excited about getting a new laptop, he was more excited that his students would be getting them next year.
“I’ve had access,” he explained, but added that now he knows that every one of his students will have access.
“It increases their access to information,” he said.
“It is so exciting,” said Superintendent Dr. Lynn Moody.
Moody said she enjoyed seeing the teachers feeling appreciated and excited about learning over the summer.
“Teachers are just grateful,” she said.
Bostian Elementary teachers were especially enthusiastic about receiving their laptops. The group cheered, waved pompoms and sounded noisemakers with excitement.