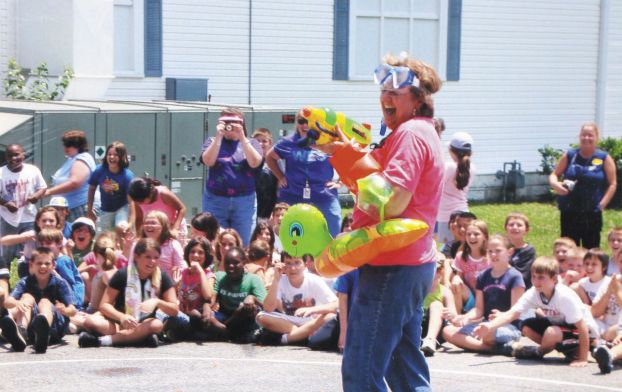 This is a portion of a letter that parent Angela Lance sent to school superintendent Dr. Lynn Moody about Sue Herrington, principal at Woodleaf Elementary School.

As you know, Mrs. Herrington will be leaving us at the end of this school year, and we will miss her so much. I’d like to share with you how she has made such a difference not only in my children’s lives, but in the life of every child she encounters.
Mrs. Herrington has been the principal at Woodleaf Elementary for about seven years. She was my oldest son’s principal while he attended Woodleaf. Though I didn’t know her very well at first, she always made sure to listen to any concerns I had. But it wasn’t until my middle son Ian became school age that I saw how caring and helpful she really was.
Ian was born with congenital scoliosis and a tethered spinal cord. Now 10, Ian has undergone four back surgeries, with the latest being in February. He has 13 screws in his back along with two rods and eight fused vertebrae.

We first thought we would send Ian to North Hills Christian School, but he couldn’t attend school on a regular basis. We then considered homeschool, and I reached out to Mrs. Herrington about our situation. She was amazing. We talked and decided that Ian — who wanted to interact with friends but was unable to sit or stand very long — would enroll at Woodleaf on a 504 plan. This plan would allow Ian to go to school but not be penalized when he couldn’t be there.
He was fortunate to have a wonderful teacher, Ms. Jones, who worked well with providing missed school work for us to complete at home. Everything was fine, but this January Ian stopped walking and was in pain. He had to have another surgery.
This is when our family realized how special Mrs. Herrington truly is. She sent Ian a bunny named Speedy to watch over him in the hospital. She had all the children in school write a note to Ian.
On the day of surgery, Mrs. Herrington had a moment of silence in honor of Ian. I think that meant more to me than anything because I knew there were teachers, cafeteria workers, staff and children taking the moment and saying a prayer for our son. She followed up through emails to check on him and consistently worked to have everything in place for him to resume school work when he was able.

Mrs. Herrington had the idea to set up Facetime for Ian to interact during reading with his class. He tuned in at 9:20 and read along with his group and felt a part of his class. Isn’t that amazing? She set up a homebound teacher to come to the house to test Ian each week.
There are so many things Mrs. Herrington has done to make this ordeal less stressful for all of us. She has been wonderful to all three of my children. I could go on and on, but the last thing I’d like to mention is how she is to Ian.
We set up an email address for him to communicate with his classmates while out of school. Ian asked me one day if he could email Mrs. Herrington. She said it was fine. Long story short, Ian emailed her and she always took the time to email him back. She sent him the riddles that went along with our reading that the other children answered and were eligible for prizes. She encouraged him when he did well on his selections each week and to read a good book. Sometimes, she just talked to him about his day. She has made Ian feel included and a part of Woodleaf Elementary School. There aren’t any words to explain just how special she is.

Finally, not only is she a hero to my family; she also is a hero to each of the children she has had while being principal at Woodleaf. She knows everyone by name and talks to each of them when she sees them. While many children may try to hide from the principal, her kids do not. The children hug her, and you see she genuinely cares for each of them. She has a way of disciplining without destroying.
For example, one day when I was at school doing PTA business, we heard that something on display had been taken. On the announcements Mrs. Herrington politely stated what had happened and said she would like the item to be put back. She said we all make mistakes sometimes and even though taking the item was wrong, they could fix it by doing the right thing. I can’t say it as wonderfully as she did. She was stern in a manner that wasn’t mean, but declared it was wrong and she expected better because whoever took it was better than that and knew better.
The item was returned.
Mrs. Herrington gives all of herself as principal of Woodleaf Elementary. She is firm and demanding but equally positive, uplifting, caring and understanding. In my opinion, Mrs. Herrington exemplifies what we want all our principles to strive for.

If you want to become famous overnight, Steve Coburn can tell you how. The co-owner of California Chrome had reaped... read more