Reilly moving on after induction 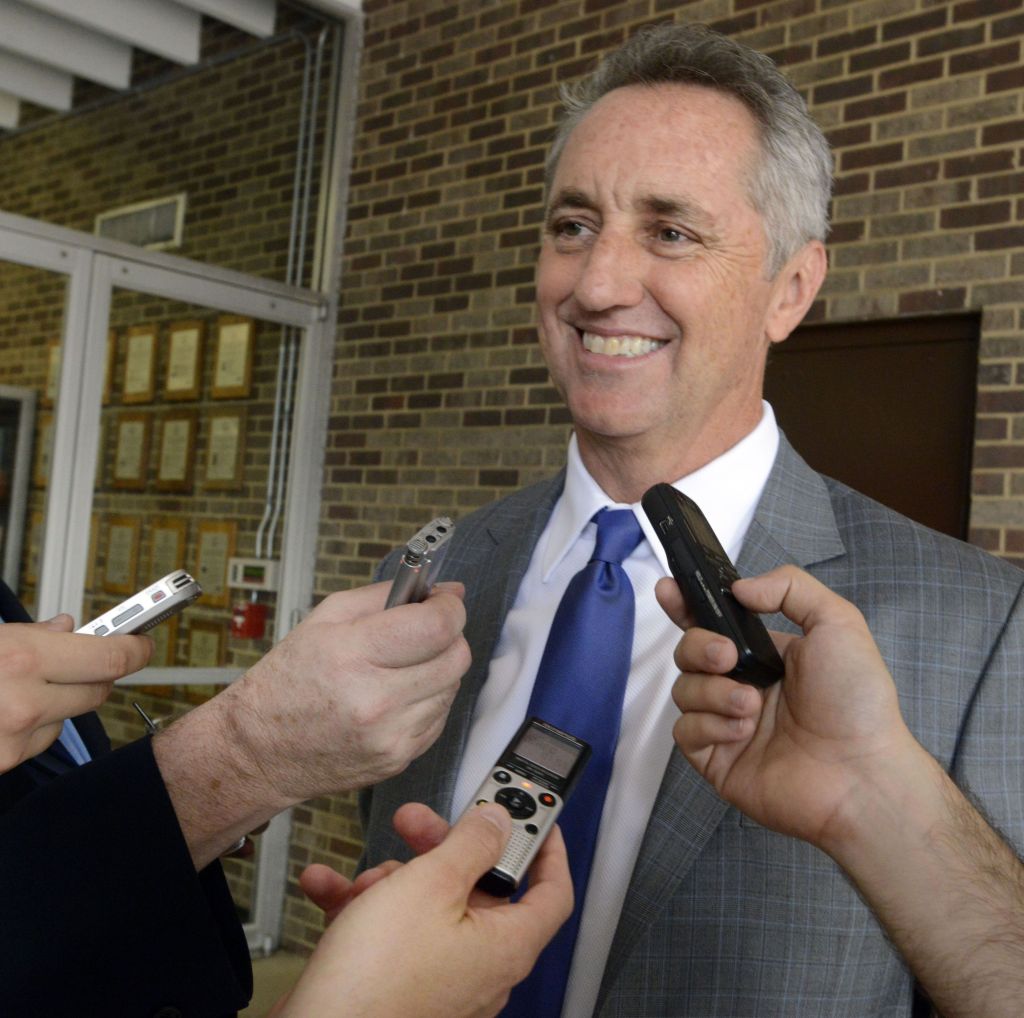 SALISBURY — Rick Reilly accepted his induction into the National Sportscasters and Sportswriters Hall of Fame and the accompanying banquet Monday night. It was just as much a farewell party as a celebration.
If you could raise pens up into the rafters, it would have happened at Goodman Gym for Reilly, whose last column runs today on ESPN.com.
For 35 years, he’s crafted poignant, humorous and thought-provoking copy no matter how many touchdowns, slam dunks and grand slams he saw. The body of work has always leaned more toward the human side of sports as opposed to analysis and X’s-and-O’s type stuff. In March, Reilly announced he’d give up his column this summer to focus on his on-camera work for ESPN. He’ll still create, but more on his own terms.
“Every time you write on deadline, it takes a day off your life,” Reilly said in front of a group of reporters at Goodman Gym Monday night. “I’ll probably be dead by 57.”
Having been NSSA Sportswriter of the Year 11 times, second only to Jim Murray. Reilly’s been consistent at Hall of Fame weekends for much of his career, although this was his first trip to Salisbury in seven years. It was fitting it was his last stop before calling it quits.
The former Sports Illustrated ‘back page’ columnist was front and center for one last time as a scribe. He made a highly publicized move to ESPN in 2007, where he carries a Swiss-army-knife role for the website and behind the camera. There are a lot of essays on Sportscenter from events such as the U.S. Open and Wimbledon.
“There’s only seven sports columns,” Reilly said. “And I’ve written all of them 11,000 times. There’s nothing left for me to write. As much as I love sports, I’m ready to try something new.”
Sports have been good to Reilly, but now he’ll dabble in other fields. Music, politics, travel, the fruits of life will factor into his diet. He’ll be back in a few months for his NFL work on Monday Night Football.
Reilly never met a quip he didn’t like and he talks just like he writes.
“I’ll try and drink every Chianti known to man,” Reilly said. “It’s kind of bittersweet. I wrote my last column yesterday and it runs tomorrow. I’ll guess I’ll try to write something other than groin pulls and win-loss records.”
He’ll be in Pinehurst this week for the U.S. Open and have a couple beers while his media friends cope with making deadline. Maybe it’s his turn to sit back and take in the thrill of competition for himself. It’s a big step in a career that began in 1979 at the Daily Camera in Boulder, Colorado. He graduated from Colorado in 1981 and joined The Denver Post and later The Los Angeles Times. The move to SI came in 1985, where he stayed for 22 years.
Some of the more memorable pieces lended themselves to Reilly’s inquisitive nature. He flew upside down at 600 miles per hour in an F-14, drove a stock car at triple-digit speeds, ran with the bulls in Spain and even played in a WNBA pre-draft camp. He’s been charitable, helping raise over $40 million to provide mosquito nets for African children through the Nothing but Nets foundation.
“I wanna watch a game and not have to form an opinion about it,” Reilly said. “I want to read and not write, listen and not talk, I wanna learn.”
After the NFL season concludes, Reilly and his wife Cynthia will move to Italy where he’ll work on some projects including books and movies. Reilly co-authored Leatherheads, a 2008 feature about the 1924 Duluth Eskimos of the still emerging NFL that was partly filmed in Salisbury.
A Colorado native, Reilly became close with former Denver Broncos quarterback John Elway during his playing days and the two have maintained a relationship despite the usual sportswriter/athlete disconnect.
“Rick’s one of the best writers of all time,” said Hall of Fame quarterback Elway, who presented Reilly with his induction. “I’ve been friends with him for 30 years and I’m honored to present him. I didn’t always agree with what he wrote, but he was always very fair with me. When he was critical of me, we discussed it.”
What’s in the future for Reilly isn’t certain, but maybe that’s a good thing. Even if he never writes another work, you have to figure he’ll be back to Salisbury as one of the industry’s most recognizable figures.
“It’s like a dog that’s been in a little tiny yard,” he said. “It’s a great yard. It’s his favorite yard ever, but now the fence is down and I can try something else.
Marv Albert says I’ll be back in three weeks and maybe he’s right. Heck, who knows?”