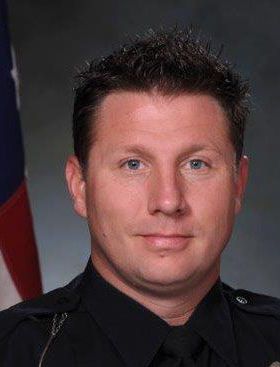 Salisbury Police Officer T.W. Moore has been in law enforcement for more than nine years and recently found himself in a position no officer wants to be in following a scuffle with a Henderson Independent High School student.
Moore, a resource officer at the school, was attempting to confiscate a cell phone from student Cassandra Pharr-Bacon, and in the next moment the officer had to threaten to stun her with a Taser and wrestle to get her handcuffed.
The situation escalated, and the teen at one point tried to head butt the officer. She cursed at him repeatedly and tried to wrestle free from the officer’s grasp. Once in handcuffs and at the police department, Pharr-Bacon spit across the room, and some of it landed on the officer’s arm. He eventually had to place a spit mask over the 18 year old’s head. The officer wasn’t injured and police say neither was the student, but the situation could’ve been much worse.
A week ago, a Rowan Detention Center officer was injured after three inmates attacked him, leaving him with a broken nose and a concussion.
Two deputies were conducting cell searches and the three men — Khari McClelland, Quentin Mathis and Darius Smotherson — were in the day room for recreation. One of them punched deputy Jamie Travis, and the others began punching him in the face and head. McClelland and Smotherson are in the jail facing murder charges, while Mathis is charged with attempted murder.
Just this weekend, a Las Vegas couple shot and killed two officers after an ambush at a pizza restaurant. The couple killed a bystander and then barricaded themselves inside a Walmart store before they turned their weapons on themselves. The officers were simply having lunch.
Officers never know going into work whether they’ll be spit upon, slapped, punched, roughed up or even shot. It’s the risk they take responding to even the most innocuous incidents.
Law enforcement officers train to respond to scenarios like the one at Henderson and what occurred in the detention center, but hope they never have to use that training. Sadly, training can not prepare you for incidents like that in Las Vegas.
Moore cautions that some incidents can change in a split second. The situation involving the Henderson student was just as aggressive as many other situations in which Moore said he’s been involved.
Moore said he actually doesn’t find himself in very many situations where the offenders just don’t comply. The officer considers himself a diplomat and tries to “talk through a situation.”
When someone is aggressive, Moore said, the main question he’s asking himself is, “do they have a weapon?” and his mind immediately reverts to all of the training he’s had over his nine-plus years in law enforcement, some of it during his basic law enforcement training.
As a school resource officer, he responds to students differently than citizens he’d encounter on the street because he’s dealing with young people.
“I have to remember they are children. I have to treat them as children,” he said.
Moore said his goal is to use the least amount of force necessary to effect an arrest. During the Henderson incident he deployed his Taser twice, but each time he returned it to its holster, not used. He did have to use “pain compliance” methods to calm the student without injuring her, such as a technique used by law enforcement called the suprasternal notch, where the officer applies pressure to the visible dip at the clavicle.
The method is just one control technique used for noncompliant people already in custody, Moore said.
“It’s all about training,” said Police Capt. Shelia Lingle. “You don’t think, you just do.”
“The training last summer taught me how to deal with last Thursday,” Moore said.
Some of the in-house training Salisbury police officers receive comes from Lt. Lee Walker and Lt. Andy Efird, but even more training can come from conferences and annual state or local required training scenarios.
“The training is important,” Moore said.
Moore believes student Cassandra Pharr-Bacon really didn’t think she had to comply with his commands because she didn’t see him as a sworn officer. In fact, police said Pharr-Bacon called the officer a “rent-a-cop.”
It’s not clear what made the student turn aggressive, but Moore said in some situations it can be a word or really nothing at all.
“Ultimately, what the officer wants is to go home at the end of a shift,” Lingle said.
Contact reporter Shavonne Potts at spotts@salisburypost.com or 704-797-4253.