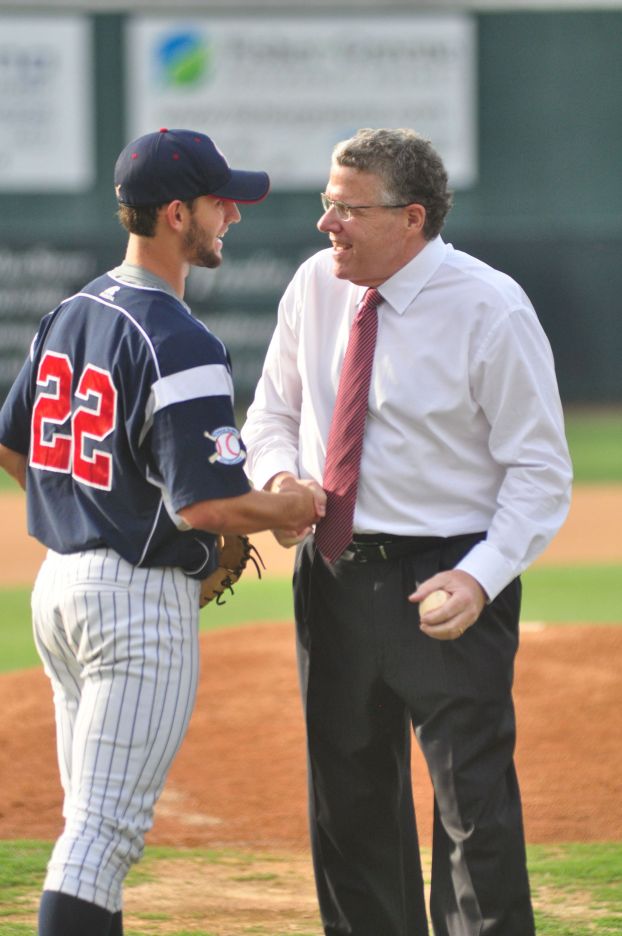 SALISBURY — Rowan County’s Jake Pritchard caught a ceremonial first pitch from Peter King and had the chance to shake hands with the national sportswriter of the year before Monday’s scheduled American Legion game.
It’s not known whether King offered any football advice to Pritchard, a pretty good defensive end for North Rowan last fall, or whether Pritchard, who makes good grades, shared any literary tips with King, who was in Salisbury as one of the chief honorees at the NSSA banquet.
East Rowan cheerleader Kaitlyn Burgess had everyone cheering after her rendition of the national anthem, but things went south for Rowan County shortly after Burgess handed off her microphone.
Southern Rowan (3-7) was the visitor at Newman Park, and Southern’s struggles against Rowan (9-3) since it took the field for the first time in 1996, have been well-documented.
Southern was 8-33 against Rowan all-time and entered the action 2-18 in games played at Newman Park. Southern had not won at Newman since 2006 when Caleb Shore hit a home run in the 10th inning.
Rowan had embarrassed Southern 14-2 in a mercy-rule-shortened game just 48 hours earlier, but this was a different-looking Southern team with something to prove in front of a huge crowd.
Southern scored in the first against Rowan lefty Hunter Shepherd when Matt Honeycutt singled off the left-field wall to drive home Chandler Corriher.
Rowan got two runs in the bottom of the first when Chance Bowden and Riley Myers drove in runs against Southern lefty Blake Johnson, a sophomore who was 7-1 in the high school season.
Southern came right back by batting around and scoring five times in the top of the second. Doubles by Colton Laws and Ben Gragg highlighted the inning, and Dillon Atwell, Corriher and Chase Labbe produced run-scoring singles.
“They looked a lot better tonight.” Rowan coach Jim Gantt said. “They were ready to play.”
Rowan’s bottom of the second included three singles, but eighth-grade phenom Owen White and Corriher turned a DP in the middle and Johnson was able to escape without a run scoring.
Southern took a 6-2 lead to the third and loaded the bases with one out on hits by White, John Daugherty and Corriher. Corriher’s hit knocked out Shepherd.
“He made some good pitches, but he missed some locations severely a few times and that made it hard for us to defend,” Gantt said. “And there were a few other plays we didn’t make that there really weren’t any excuses for.”
Gragg was stepping in against reliever Blake Cauble at 8 p.m. when a lightning sighting by the umpiring crew forced a stoppage of play.
Lots more lightning, some of it intense and close, came not long after that and was accompanied by a downpour that rendered the field unplayable.
“The way they were hitting it and the way we were playing, we might’ve gotten hammered,” Gantt said.
It was bad luck for Southern, which had a great chance to add to a 6-2 lead when play ended. Southern sent 19 men to the plate and had nine hits and just one strikeout, a far cry from the way things have been going.
For two-plus innings, we had very good approaches tonight,” Southern coach Ben Hampton said. “Blake was doing a good job, the double play we turned was big, and things were going our way.”
Rowan had five hits in two innings against Johnson, so it might have been a long, high-scoring night if weather hadn’t intervened.
Whether Southern could’ve ended its five-game losing streak against Rowan and long drought at Newman, we’ll never know, but things appeared headed in that direction.
“With the rain, it’s like none of it ever happened, “Hampton said with a sigh. “It could’ve been a huge win for us, given us some momentum, but at least we showed good signs. Now we’ve got to carry it over to our next game.”
Gantt said there was no hope of rescheduling Monday’s game, but the teams will meet again on June 20 at Newman Park and June 21 at South Rowan High in games that will count in the divisional standings.
Southern has big games tonight and Wednesday against Kannapolis. Both count in the standings. Only four of the five teams in the Southeast Division will qualify for the playoffs.
Southern plays Kannapolis at Northwest Cabarrus High tonight. Colton Laws is set to start for Southern on the mound at a place where he enjoyed one of the best nights of his career. The East Carolina signee pitched Carson to a playoff victory against a Northwest team led by Corey Seager in 2012.