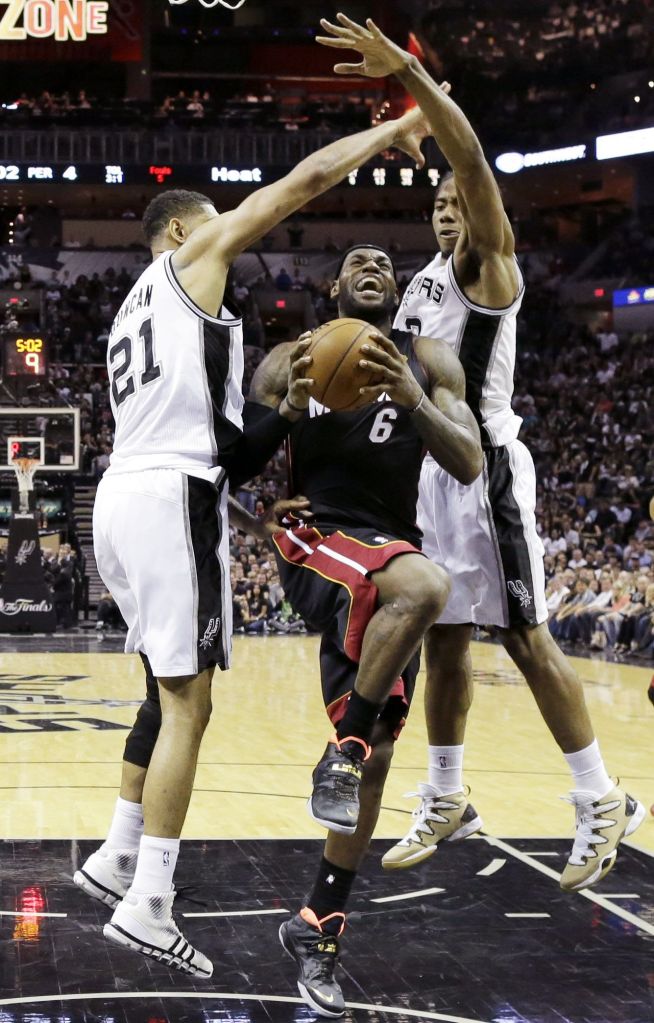 SAN ANTONIO — No cramps, no problems for LeBron James.
And with their superstar making it to the finish this time, the Miami Heat bounced back from a loss, just as they always do in the playoffs.
“Obviously, having No. 6 in the game at the end was a plus for us,” Dwyane Wade said.
James had 35 points and 10 rebounds in a powerful comeback from the cramps that knocked him out of the opener, as the Heat tied the NBA Finals with a 98-96 victory over the San Antonio Spurs in Game 2 Sunday night.
Chris Bosh made the go-ahead 3-pointer on a pass from James with 1:18 remaining for the Heat, who have won 13 straight following a loss in the postseason. Just like last year, they rebounded after losing Game 1 to the Spurs.
Bosh had 18 points for the Heat, who are headed home for Game 3 Tuesday night.
James played more than 37 minutes, making 14 of 22 shots. He was 1 for 4 with three turnovers in a shaky first quarter, then made 11 of his next 13.
After two days of enduring criticism for not finishing the game and getting suggestions on how to avoid cramps, James changed the subject.
“What happened on Thursday was Thursday,” James said. “My whole focus was how I was going to try to help this team even this up and just try to make some plays.”
He had a key strip of Tony Parker down the stretch, playing a dominant game on both ends as if he had something to prove.
As usual, James found a way to silence his haters.
He had 11 points in the second quarter, helping Miami erase an 11-point deficit early in the period. The game was played within a margin of a few points from there, and the Spurs missed a chance to seize control in the fourth quarter when Parker and Tim Duncan missed four straight free throws when they had a two-point lead.
James then made a 3-pointer and two free throws to put Miami in position to win.
Parker scored 21 points and Duncan had 18 points and 15 rebounds for the Spurs, who had won eight straight at home by at least 15 points.
“Down the end there they executed really well,” Duncan said. “LeBron made some great passes and guys made open shots. We had the same result in the first game. They kind of flipped it in this one.”
The game was played in comfortable conditions inside the AT&T Center, where an air conditioning failure in Game 1 sent temperatures soaring to about 90 degrees. The broken circuit breaker was fixed by Friday afternoon, and it was much cooler inside the arena.
James had the toughest time with the heat Thursday, needing treatment midway through the fourth quarter before eventually having to leave for good. He had plenty of time to recover, with the two days off between Games 1 and 2.
He changed only a little of his routine, taking an 8 a.m. yoga class Sunday morning and switching to a shorter pair of tights.
He personally erased a 62-56 San Antonio lead by scoring eight points in less than a minute, and his 14 points in the third quarter had Miami down only 78-77 heading to the fourth.
“For me, once I get into a good groove, I feel like everything is going to go in,” James said.
For a time, everything did. Then he switched to being a passer at the end, finding Bosh in the corner for the shot that made it 95-93.
Wade and Rashard Lewis each scored 14 points for the Heat, who also dropped Game 1 of the NBA Finals against Oklahoma City two years ago. They have won five straight series after dropping the opening game.
The Spurs were in good position, withstanding James’ assault long enough to lead by one with under 2 minutes to play. But they were shut out from there until Manu Ginobili’s 3-pointer as time expired.
“LeBron with the ball did a pretty good job at his end and we had to be really perfect at the other end and we didn’t,” Spurs coach Gregg Popovich said. “We didn’t take advantage of things. We made bad decisions.”
And it didn’t help them that they had to deal with James at the end of this one.
Ginobili finished with 19 points for the Spurs, whose 18 points in the fourth quarter were half the 36 they scored in the opener.
“We have a very competitive group and you have two days to commiserate how that game went down,” Heat coach Erik Spoelstra said. “It was frustrating, painful going through that for two days and now we have to manage the other emotion.”
After their sensational finish to Game 1, the Spurs picked up right where they left off, making 10 of their first 15 shots. They opened an 11-point lead early in the second before James got going. He had three straight Miami baskets, and a follow shot later in the period gave the Heat their first lead at 34-33.
Notes: Parker has 1,026 assists in the postseason, moving past Michael Jordan (1,022) for eighth place on the career postseason list. He also passed Jordan’s Hall of Fame teammate, Scottie Pippen, for 13th on the career scoring list with 3,655 points.