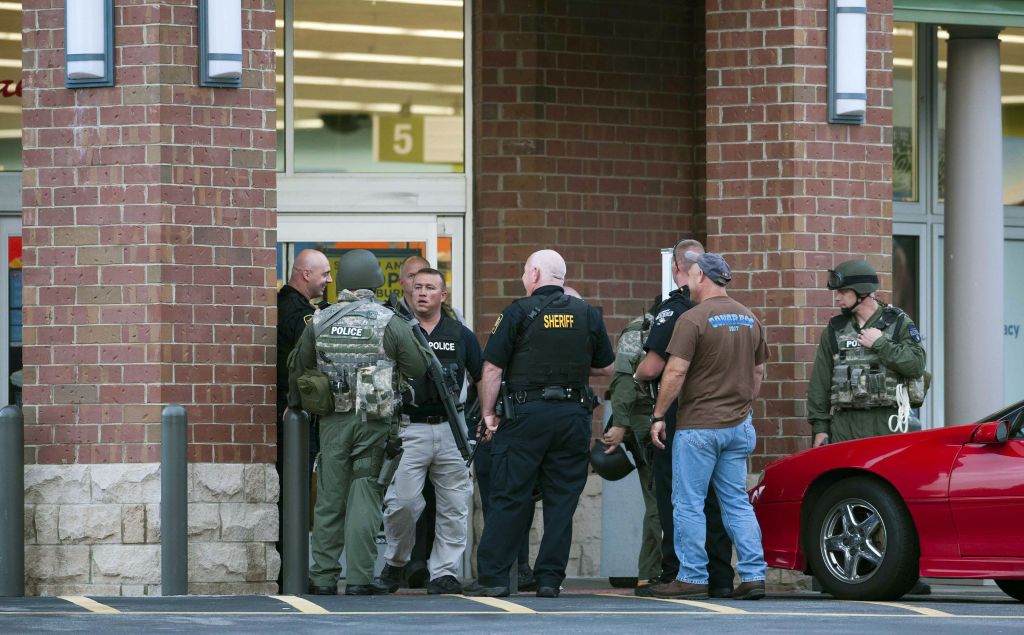 SALISBURY — Police were looking Sunday night for an armed robber whose theft of pills from a Walgreens pharmacy safe led to a tense scene which law enforcement were forced to treat as a hostage situation.
The robbery occurred about 6:40 p.m. at the Walgreens located at the intersection of East Innes Street and Faith Road.
Quick-thinking Walgreens employees moved everyone in the store into a secure room and locked the doors so the suspect could not re-enter. Meanwhile, police responding to the scene received several calls saying someone was still in the store holding hostages.
Salisbury officers, Rowan County Sheriff’s deputies and a special response team whose members wore full body armor and carried assault rifles surrounded the building.
The SRT later combed the inside of the drugstore to make sure the suspect was still not there.
Meanwhile, a large crowd of people and vehicles crammed into the Applebee’s parking lot and beyond to watch the action.
Police declared the scene secure — and the suspect still at large — about 8 p.m.
A couple of the Walgreens customers were shaken but not hurt.
Capt. Shelia Lingle described the robbery suspect as a white male of stocky build, roughly 6 feet tall. He wore camouflage pants, a grayish T-shirt and a floppy “Gilligan”-type hat, Lingle said.
The suspect brandished a long gun, Lingle said, and jumped over the pharmacy counter, forcing the woman pharmacist to open the safe. He took a large amount of pills from the safe and left the store in an unknown direction, Lingle said.
Police intend to release a photograph of the suspect taken off security cameras in the drugstore.
Lingle said there were approximately eight people in the store and all were safe.
Rowan County EMS crews checked the vital signs of one woman customer who was carried out of the store.
The woman, who asked not to be identified, had called her daughter from inside the store to tell her of the robbery and that she was locked in a back room with others. She called back to say she was still in the room, as her daughter and son-in-law drove to the scene.
On arrival, the daughter rushed across Faith Road and into the drugstore’s parking lot to be with her mother, who was seated upright on a gurney.
“I don’t think they would have stopped her,” the woman’s husband said of his wife’s urgency to reach her mother.
Other customers and Walgreens employees gathered in the same area after they came out of the store. Many of them hugged each other.
Another woman customer, visibly shaken and holding onto arms for support, walked to an EMS unit staged at the scene.
Law enforcement spent at least an hour making sure the store was cleared, the suspect was gone and everything was secure, while the large crowd waited for something more to happen.
Police Chief Rory Collins was at the scene.
Contact Mark Wineka at 704-797-4263.