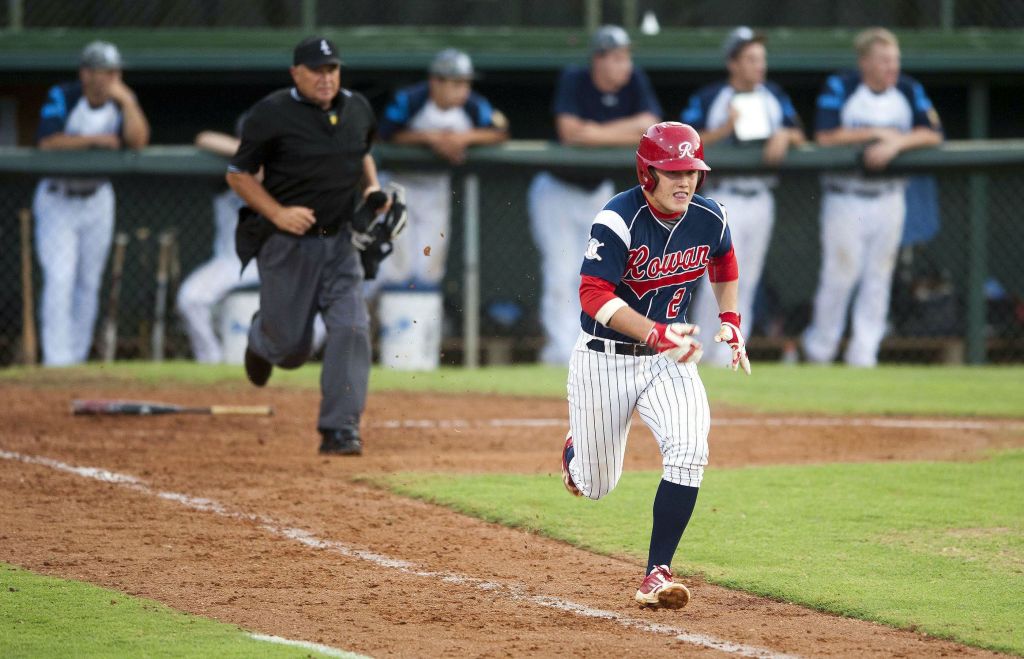 SALISBURY — Rowan County won the best game of the season on Thursday, rallying to beat old rival Kernersville 6-4 in a tense affair that left strangers hugging and high-fiving in the bleachers.
Rowan needed a break to win this one, and got it in the bottom of the eighth when Michael Caldwell was caught in a rundown between second and third. Caldwell was tagged trying to dive into third, but Kernersville didn’t get the out call.
After a heated argument that may have merited an R-rating in theatres, Rowan had runners at second and third in a 4-4 game, with Riley Myers coming to the plate.
“I’m sitting on a first-pitch fastball and I got one that was a little high,” Myers reported.
Myers had cooled off e since he enjoyed a 10-for-10 stretch, but he mashed this pitch, driving it deep toward the left-field corner, His double easily plated Chance Bowden and Caldwell with the decisive runs.
“The left fielder was playing me toward center, so that ball went to a good place,” Myers said.
Rowan (7-3) was bad enough Tuesday in an 11-5 loss to Eastern Randolph that Newman Park should’ve been fumigated, but the home team showed resiliency and some guts to come back 48 hours later in a game that looked hopeless for a long time.
Kernersville starter Drew Wilson was a wrecking ball, so dominant that he faced just 19 batters — one over the minimum — the first six innings.
“He was good,” Myers said. “A real nice slider and a sneaky fastball that had some zip.”
But the biggest difference from Tuesday to Thursday was Rowan’s defense, including huge double plays in the middle to escape the fourth and the fifth.
Rowan starter Chase Jarrett wasn’t sharp, but he didn’t buckle when it could’ve gotten ugly. He got out of a bases-loaded mess in the third, and when he left after four, Rowan trailed just 2-0.
“Chase didn’t have his stuff,” Rowan catcher Dustin Ritchie said. “But he battled. He gave us everything he had.”
Harrison Bell followed Jarrett, and the big redhead slowly picked up steam. He survived a shaky fifth, then breezed through the sixth and seventh. Ritchie helped him by throwing out two would-be basestealers.
“He’d come in every inning and thank me for saving him,” Ritchie said with a laugh.
It was still 2-0 in the bottom of the seventh. That’s when singles by Caldwell and Bowden and a walk to Ryan Jones brought up Ritchie in a two-out, bases-loaded situation. Ritchie was 0-for-2, had struck out once, and was in a serious slump.
“I was kind of afraid we were going to strike out 17 times again tonight like we did Tuesday,” Rowan coach Jim Gantt said. “Wilson is a very good pitcher, and he kept locating his fastball away. We needed to look for that. We needed to adjust.”
Ritchie adjusted. He lined a fastball away over the head of leaping second baseman Jacob Nester, and the game suddenly was tied at 2-all.
“I’d been struggling so much it was starting to get to me,” Ritchie said. “That’s about as long as I’ve been without getting a hit since I went 0-for-14 to start Junior Legion.”
Ritchie’s single ended Wilson’s night, and when a wild pitch went skittering toward the backstop, Jones scored with a head-first slide to put Rowan up 3-2.
That lead didn’t last. Bell finally ran out of gas and into trouble in the eighth and exited with runners at second and third and no outs.
Gantt summoned Blake Cauble from the bullpen because he often can get batters off-stride for popups.
Cauble got Blaine Dalton to hit the ball in the air, but it was deep enough for a sac fly that tied the game at 3-all. When a low pitch from Cauble skipped between Ritchie’s shinguards, Kernersville (11-5) owned a 4-3 lead.
But Rowan came back a second time in the bottom of the eighth. Jeremy Simpson’s single started it. Harrison Baucom sacrificed Simpson to second. Caldwell punched a clutch single to score Simpson for a 4-all tie, and Caldwell kept digging to second when the throw home sailed high.
Caldwell was immediately trapped between second and third when Bowden bounced back to the mound, but his fortunate escape set the stage for Myers’ decisive double.
Even after Myers delivered, Rowan had to hold Kernersville in the ninth. Gantt called on young lefty Hunter Shepherd to do it.
Kernersville put two men on with one out, but Shepherd proved unflabble. Simpson made a good, charging play at short on a slow roller for the second out. Then a routine grounder to Caldwell at second ended the ballgame.
Shepherd earned a save. Cauble got the win.
“It was a good win against a good team,” Gantt said. “We turned some nice double plays to stay in the game when it didn’t look good, and our bullpen really came through for us.”