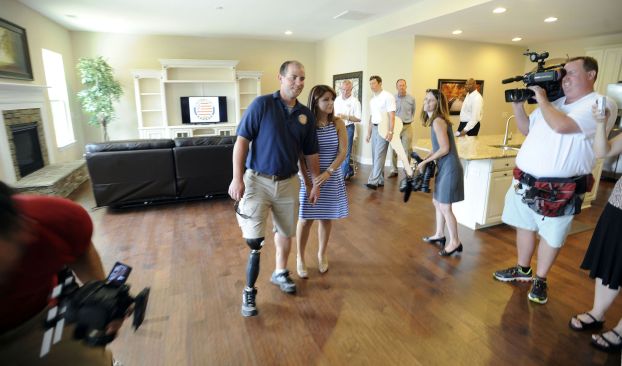 Mullee became suspicious of a rock formation and noticed colored wires on the ground. As he moved the head of the metal detector across the area, he knew he had found an improvised explosive device.

The bomb went off, sending Mullee hurling through the air and crashing to the ground. He suffered traumatic brain injury, severe injuries to his left leg and the loss of his right leg at the knee. Mullee managed to remove his helmet and call for a medic, who applied tourniquets to both legs and saved his life.

Ken Volpe, the father of Mullee’s wife Jennifer, recalled hearing the devastating news early in the morning on May 12, 2012.

“Before I answered the call, I knew it was trouble,” Volpe said. “But it has been an amazing journey that has led us to this moment right here.”

More than 100 people, most of them strangers to the Mullee and Volpe families, gathered at noon Thursday in Kannapolis to welcome Drew and Jennifer home. The couple and their 19-month-old son Easton for the first time went inside their new house, fully furnished down to the towels in the bathroom.

“This is amazing,” Drew said. “Honestly, Jen and I are both speechless. This is a dream come true for sure.”

The four-bedroom home is fully wheelchair accessible, includes wider doors and hallways, features an adapted bathroom and has other safety features to support Drew’s independence as he continues to rebuild his life.

With his prosthetic leg, Drew climbed the stairs to the second floor, which features a great room and large sectional sofa. With a laugh, Drew immediately claimed the room as his own.

Jennifer did not seem to mind as she went from one kitchen cabinet to the next, opening doors to reveal dinnerware, glasses and appliances including a four-slice toaster, the only item she said Drew really hoped the new home would include.

The couple said they had no idea the house would be so fully stocked.

“All you need to bring is your toothbrush,” said Meredith Iler, national chairwoman for Helping A Hero, a nonprofit in Houston that provides specially adapted homes to severely wounded veterans and their families.

Helping A Hero and the Patriot Charities, which is based in Charlotte, joined forces to build the home in Kellswater Bridge for the Mullees. Mountain Real Estate Capital donated the lot, and Ryan Homes built the house.

“I walk through this house and I get goosebumps,” said Dana Bradley, president of the Patriot Charities. “… I hope that this house is place that you can realize your dreams and make a ton of memories, so welcome home.”

The specially designed residence is the fourth home Helping A Hero has awarded in North Carolina. Disabled veteran SPC Tyler Jeffries, a double amputee from Concord, will receive the keys to the next home built in North Carolina.

Originally from Ohio, Drew said he and Jennifer stumbled upon Lake Norman and decided to make the Charlotte area their home. While family and friends came from far away to watch the Mullees receive their home, most of the people in the audience had never met Drew and Jennifer.

“It’s always good when someone says thank you for your service, and to have 150 people here to say it with the fire department with a big flag, it’s absolutely amazing,” Drew said.

NFL player Jason Baker, who was part of a convoy of pro football players on a seven-day, two-country USO tour to the Middle East, handed the Mullees the keys.

“We would never be able to relate to the cost that he paid just to serve our country,” Baker said. “We may not understand it, but we appreciate it.”

Inspired by his father, who was awarded a Bronze Star with V for Valor while he served in Vietnam, Drew graduated from Airborne School. He and Jennifer, who was three months pregnant, were living in Germany when his brigade deployed to Afghanistan.

After surviving the IED explosion and his life-threatening injuries, Drew began a year-and-a-half rehabilitation at Walter Reed National Military Medical Center, where he learned to walk again. Drew was able to watch the birth of his son when Jennifer delivered the baby in the same hospital.

For the past two years, the family has been living in hospitals, hotel rooms and apartments, Jennifer said. Easton has never had a yard to play in, and with most of their kitchen in storage, cooking and baking has been next to impossible.

Stirring cupcake batter with a whisk is less than ideal, she joked.

“We’ve been in limbo for so long,” she said.

The Mullees have watched their home rise from the ground up and seemed a little overwhelmed Thursday when they stepped inside for the first time.

When she had a moment to reflect in Easton’s new bedroom, complete with bunk beds to accommodate a future sibling, Jennifer said she and her husband feel blessed beyond measure.

“It’s been a long road behind us,” she said. “And finally we’re coming home.”