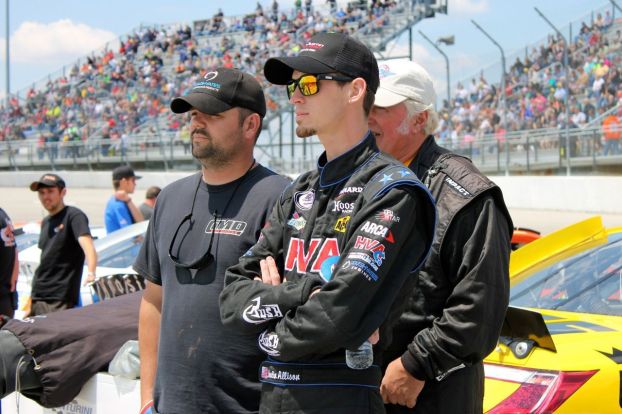 Whether under the hood or behind the wheel, Justin Allison has been around cars his whole life.
Instead of cartoons on Saturdays, Allison ran in go kart races at just 5 years old. When friends at West Rowan were hanging out, he was hunched over a car in his dad’s shop, feeding a hunger that hasn’t been satisfied.
Allison, a third-generation driver in a iconic racing family, made his ARCA (Automobile Racing Club of America) debut last October at Kansas Speedway with Team BCR, finishing 11th after a rain-shortened race. With racing being in his blood, eyes have been on Allison’s No. 88 Havaco Ford Fusion since he first hit the scene.
“I did baseball, football and sports like that until around high middle school,” Allison said. “But I was always at the race track and the shop.”
If genes count for something, Allison, the grandson of NASCAR legend Donnie Allison and great nephew of Bobby Allison, is in for a prosperous career. Those two were members of the ‘Alabama Gang.’
Bobby is considered a NASCAR great, having won three Daytona 500s, three Southern 500s, three Winston 500s and two World 600s in addition to being the 1983 Winston Cup champ.
Donnie, now 74, is a mentor to Justin and goes to all of his races. Donnie was the 1967 Winston Cup Series Rookie of the Year won 10 races over a 242-race career.
“It’s great having him there,” Allison said.
Seven years after starting to race in the Allison Legacy Series, Allison earned his best career finish at Toledo last month, coming in seventh. After starting in the 10th position, Allison moved up two spots when the caution flag flew and stayed in the top 10 for much of the race. A pit stop on lap 130 sent him back to 13th, but Allison made up ground late.
“Everybody goes in wanting to win,” Allison said Monday in a phone interview. “We try to set our goals as running the whole race and finish top 5 or top 10.”
Allison’s pretty long at 6-foot-4, but he says he prefers racing the short tracks, such as Toledo.
“The short tracks are more in my comfort zone. I’ve run one intermediate track and two super speedways. The comfort level with them will come with time.”
BCR is headquartered in Mooresville and Allison works at the ARCA shop there when he’s not preparing for a race. Allison lives in Salisbury with father Kenny and sister Sarah.
Allison will travel to Long Pond, Pa., today for the Pocono ARCA 200 The 2010 West Rowan grad turns 22 this month, will make his Pocono debut Saturday before hitting Michigan International Speedway next weekend.
Uncle Bobby has a history at Pocono with three wins, a pole award and a devastating crash that ended his career.
Fear is a natural part of driving at dangerously high speeds, but Allison’s familiarity with racing gives him an edge not many drivers have at his age. He’s experienced the big tracks before.
“It kind of plays a factor in your head,” Allison said. “Anytime you step in a racecar, there’s a chance you may not step back out. If you’re scared of that, you don’t need to be racing.”
Pocono Speedway is a 2.5-mile track and the race will be aired on Fox Sports 1 at 1 p.m.
Allison is no stranger to danger as he was involved in a 15-car incident at Daytona that kept him from finishing earlier this year.
“My feelings were hurt, but I was fine and got over it,” he said.
Allison’s teammate is Grant Enfinger, a Mooresville native and the current points leader, who won the first three events of the season at Daytona, Mobile and Salem.

Mac Butner, a diehard local Republican, provided this photograph to the Post of a group, including many Salisburians, who gathered... read more