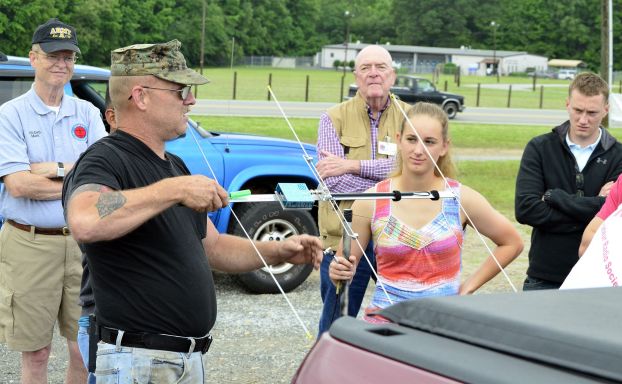 SALISBURY — In an emergency, being able to locate a lost person or find an enemy might save lives.
U.S. Marines know this, and their training prepares them for a world of possibilities.
But there are some things classroom training can’t teach, which is why Sgt. Phillip Rice and 12 other Marines traveled from Camp Lejeune to Salisbury on Saturday.
Rice said he tries to locate opportunities for hands-on training that will help members of his unit, the 2nd Radio Battalion of the II Marine Expeditionary Force Headquarters Group, be more prepared for their duties.
Rice is an amateur radio operator himself, active in Onslow County. While searching the Internet for information on amateur radio clubs, Rice said, he found the website for the Rowan Amateur Radio Society.
Among other activities, such as training and participation in emergency radio relays, the local club holds a monthly “fox hunt” — a competition to find hidden radio transmitters using specialized antennas, direction-finding and navigation skills.
Those are skills that could be useful in an emergency, and Rice contacted Rick Wallace to see about bringing some of his Marines to the next event.
The result was a morning of informal, hands-on training that Rice said showed the Marines — 11 lance corporals, a fellow sergeant and himself — skills they wouldn’t find in a classroom.
After treating the Marines to breakfast at a local restaurant, club members met in the parking lot of the Rowan County Fairgrounds to demonstrate the skills they use in fox-hunting.
Out in the open air, club members Tommie Wood and Gary Lang showed some of the specialized antennas used for radio direction-finding.
Among other things, a simple antenna made from pieces of PVC pipe and wire, or even part of a metal tape measure, can form an antenna that can be used to pinpoint radio signals, Lang said.
There are other pieces of equipment that can be used to locate even short, weak bursts of radio.
One such device, called an attenuator, is an antenna with a computerized box attached that shows the strength of a signal in a given direction.
With that, plus a map and compass — or a good GPS, in the case of many fox-hunters — Wood said it’s possible to track down a radio signal anywhere around Rowan County.
The shoebox-sized transmitter the Rowan Amateur Radio Society uses in its monthly competitions puts out relatively little power – just one watt, as opposed to the 100,000-watt broadcasts of many commercial FM stations.
But within an hour or so, most fox-hunters have narrowed down the signal, and the race begins on foot to see who can find the hidden transmitter first.
Instead of a competition, Saturday’s session was part demonstration, and partly a chance for the Marines to try their hand at finding the signal.
After driving to the site, Marines paired up with members of the local “ham radio” group and fanned out through woods on the outskirts of Salisbury.
Listening for subtle changes in the sound of the signal, they walked slowly, taking their bearings with both professional and handheld antennas.
Some Marines with handheld scanners practiced “body fading” – holding the radio close to their chests and then turning in different directions, listening for changes in the sound of the transmitter’s call.
When the sound fades or fills with static, that means the transmitter is behind you. Body fading lets fox-hunters get a rough estimate of how close they are to the signal.
Finally, one pair of Marines spotted the dark-green transmitter in its metal box, hidden in some underbrush by a path. With a hand signal to their sergeant, they reported the find.
Then the group fanned out to find a second, lower-power transmitter that was hidden in the vicinity.
For Sgt. Patrick Jeanty, it was a new type of experience. During a previous deployment, Jeanty said, he’d had the experience of overseeing radio communications in Helmand Province, Afghanistan.
The communications systems used by the Marine Corps are state-of-the art, Jeanty said.
“Learning stuff like this is getting back to the basics, and it’s something we need to learn,” Jeanty said.
Amateur radio is a good way “to open people’s minds, and prepare them for more than just our current war on terror,” Rice said.
There’s a chance that being able to locate a hidden radio transmitter could save lives, Jeanty said.
For LCpl. Hailey Posas, originally of Austin, Tx., Saturday’s session in Rowan County was a first.
Still relatively new to the Marine Corps, Posas said she and fellow Marines had practiced building simple antennas. “That gave us part of the puzzle, but not all of it,” Posas said.
“It’s a very good opportunity, because I haven’t had this practical experience yet,” Posas said.
LCpl. Joshua Rodriguez said the training had definite tactical applications. “And it’s hands-on, rather than in the classroom,” he said.
Rodriguez said he’s surprised more young people aren’t interested in amateur radio, not only for the practical purposes but just to learn about the technology.
For members of the local radio club, the experience was also rewarding.
“I’m enjoying the heck out of this,” said Ted Jones, member of the Rowan Amateur Radio Society. He complimented the initiative and the positivity of the Marines.
“You can tell they’re very intelligent, and not afraid to get out and do this,” Jones said.
Wallace, who formerly served in the U.S. Navy, said it was an honor to work with the current generation of servicemembers.
“To be an old fellow like me, to see these patriotic Marines, it gives you faith,” Wallace said.
Contact Hugh Fisher via the editor’s desk at 704-797-4244.