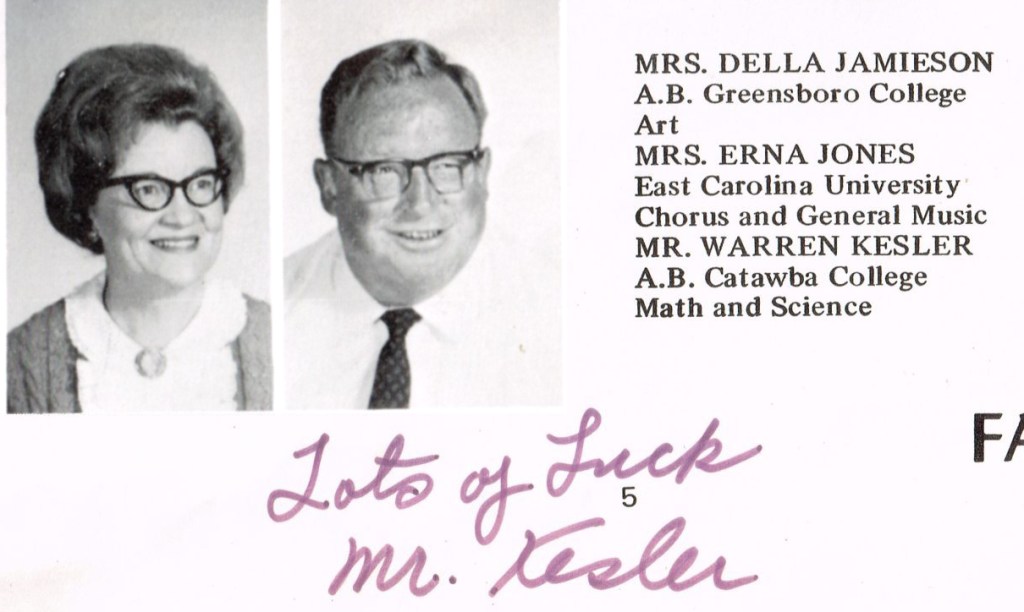 Nothing prepared me for the reaction I received recently over a Facebook post I penned about a former teacher.
Ol’ Cal Kesler had been swirling around in my mind for several days, and I simply shared that fact with the universe via the social networking site. My page exploded with response. In fact, they’re still coming in.
It seems everybody remembers Cal.
Warren Kesler, known to his friends as “Cal,” taught eighth grade math at Charles C. Erwin Junior High School in the late ’60s when I roamed the hallways as a gangly 13-year-old. We didn’t dare call him “Cal.” He was Mr. Kesler to us.
A rather beefy man with a red face and a booming voice, he formerly taught at Rockwell Elementary School. When the new junior high opened in 1967, Cal answered his call of destiny.
He seemed more like a man who should be coaching professional sports; perhaps a defensive coordinator for a major NFL team. He did some football coaching at Erwin, barking his pleasure or displeasure from the sidelines in his own distinct style. You knew when Cal was on the field.
There was something about him that reminded me of Edgar Buchanan, an actor from the old “Petticoat Junction” TV show. Similar in stature, he had a gruff exterior. But underneath beat a heart of gold.
Cal was right at home in the classroom. His knowledge of the subject was solid, and his commanding presence never wavered. Daydreaming was not an option. The Kesler classroom demanded your attention, and he could be more than a little intimidating when he didn’t get it.
I thrived in his class. Math came easy to me in my early teens. My numerical abilities would stall by the time I reached high school, however. Suddenly, it became far more fulfilling to think about girls than it was to think about exponents.
Once, our class was having trouble grasping the concept of math reciprocals, which is basically taking a fraction and turning it upside down. Cal opted to give us a visual aid.
He summoned a quiet classmate by the name of Tim Kluttz to the front of the room. Placing his hand on Tim’s shoulder, he announced “Ladies and gentlemen, this is Tim Kluttz.”
Then grabbing hold of the back of Tim’s belt and the top of his shirt, he lifted Tim in the air and turned him completely upside down.
“And this is the reciprocal of Tim Kluttz,” he said smiling with pride. To this day, I remember what the math term “reciprocal” means.
Cal was known to speak his mind as well. Teachers could in those days.
Once, the story goes, when confronted by the parents of one of his underachieving students who blamed him for their son’s lack of mathematical prowess, he handled the conflict in his own unique style.
“Why isn’t our son doing well in your class?” they barked accusingly.
Glaring at them over the top of his glasses, he replied “Well, when you breed two donkeys, you don’t get a racehorse.”
Remember, it was the ’60s. You could offend people back then and they wouldn’t sue you. They might punch you in the nose, but they wouldn’t sue you.
He signed my eighth-grade yearbook “Lots of Luck, Mr. Kesler.” He probably thought I’d need it.
My Facebook page is now filled with memories of Cal Kesler. Former students and co-workers alike shared stories and recollections of his time on this earth. I even learned it was Cal behind the wheel of that “bug spray truck” that used to wind its way through eastern Rowan neighborhoods back in the day.
One comment summarized our affection for him well. My former classmate Alice Richards Fisher wrote: “After reading all of these posts, it hits me just what a legacy he left. I hope that he is looking down and realizing just how many lives he touched and influenced.”
I hope so too, Alice. I really do.
Kent Bernhardt lives in Salisbury.