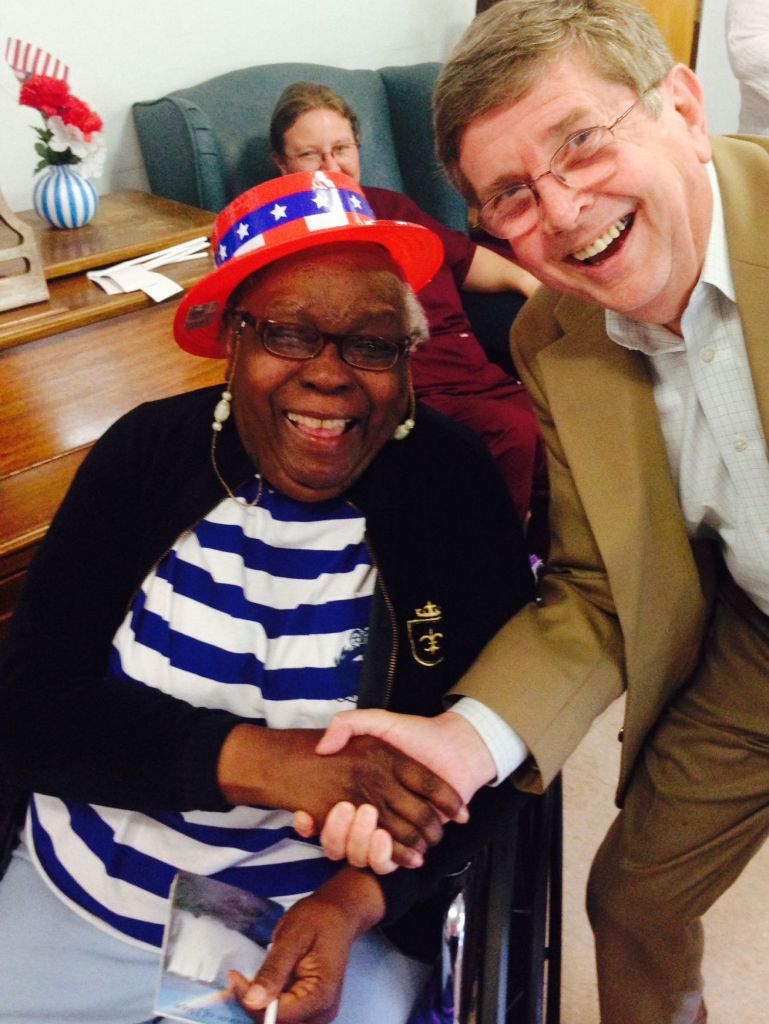 KANNAPOLIS — The residents of Big Elm Rehabilitation and Living Centers kicked off National Nursing Home Week on May 12 with a visit and a proclamation from Mayor Darrell Hinnant, continuing the tradition that Mayor Misenheimer started at Big Elm four years ago. After the ceremony, the nursing home held a Mix & Mingle at the USO and Council Lady Dianne Berry joined in for the celebration.
The Rowan Redbuds Garden Club held its monthly meeting on May 22.
Barbara Miller, past district director and outgoing president of Charlotte Council of Garden Clubs, conducted the installation of the new officers: Anganetta Dover, president; Kim Fahs, vice president; Eleanor Sandifer, treasurer; and Sandy Quinn, secretary.
The 23 club charter members and also members who have joined in the past year were recognized.
Jean Lamb was selected as Master Gardener of the Year at the annual Master Gardener meeting in Winston-Salem.
The Salisbury Guild Garden Tour will be June 21 and 22. Tickets may be purchased at the Salisbury Visitors Center. A number of the club members are serving as docents.
The next meeting will be held on June 26. The program will be presented by Melvin York with Daddy Pete’s Plant Pleaser Superior Soil Products.

Kneeling Gardeners met on May 24 at Trinity Methodist Church. The program, “Slow foods and Slow Flowers,” was presented by Jane Henderson of Commonwealth Farms in Concord. The theme was growing what you can, sharing it with others and taking time to enjoy it.
“Slow flowers, like slow food,” she explained, “in their natural state generally do not last as long as those engineered for that purpose.
“Ingredients that prolong the life of a bouquet usually contain an acid, sugar to feed plant and a chemical to reduce bacteria. At home, a mixture of half lemon/lime soda and half water will serve this purpose.”
Others participating in the opening and closing portions of the program included Brenda Trott, Earl Gray, Janelle Murray, guest Ellen Sewell, Janet Smith, Rosa and Frank Winfree, Lou Cable and Bonnie and Jean Kadela.
The program for the next meeting on June 23 will be “Back Yard Bees.” For more information, call the church office at 704-933-1127.

Members host mother-daugher luncheon
The members of the graduate chapter of Alpha Kappa Alpha Sorority hosted a mother-daughter luncheon on May 24 at the Miller Recreation Center on West Bank Street. The luncheon was a special event for the participants of the Fashionetta Pageant and their mothers, grandmothers or guardians. The participants have been involved in numerous workshops including Anti-Bullying, Table Manners, She-Roes Today, Communication Skills and have learned a creative dance to be performed during the pageant.
The culminating program will take place on the campus of Livingstone College in Tubman Little Theatre on June 28 at 6 p.m., and will include the participants modeling attire of their own selection, performing the minuet and the crowning of Miss Fashionetta.
The Fashionetta is the major fundraising event for the sorority. Proceeds go to educational grants to assist area graduating seniors with their college expenses.
Renese Bates is president of the local graduate chapter and Teresa Adams is chairman of the fundraising committee.
Members attend Regional Conference
Members of the graduate and undergraduate chapters of Alpha Kappa Alpha Sorority Inc. recently attended the 61st Mid-Atlantic Regional Conference in Raleigh.
Attending from Delta Xi Omega were Renese Bates, president; Lillian Morgan, vice-president; Carolyn Holt; graduate council advisor, Sarah Lightner, financial secretary; Fonda Kirk, treasurer; Drucie Moss, doorkeeper; Earnestine Krider, recording secretary and Suzette Davis. Members of the undergraduate chapter attending from Livingstone College were Dalanda Adams, president; JoAnn McKoy, vice- president; China Ellington, recording secretary and A’nasha Warren.
Three members were recognized at the Jewel’s Luncheon for twenty-five years of membership in the sorority. Brenda Alston, Suzette Davis and Sylvia Moore received certificates of recognition and a silver crown. All three joined Alpha Xi, the undergraduate chapter, while attending Livingstone College.