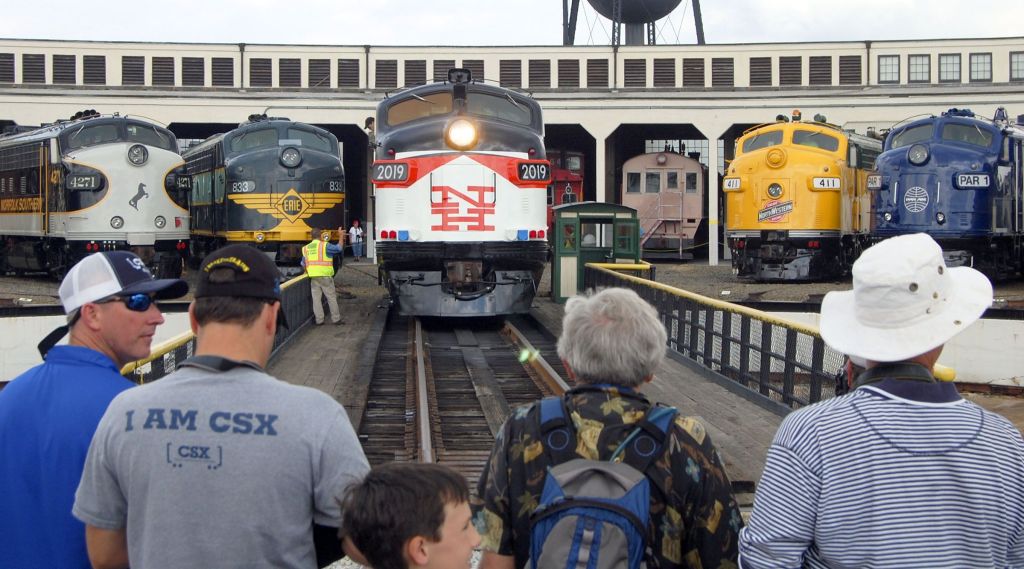 SPENCER — Railroad fans and photographers from around the United States have gathered in Spencer to see railway history on the tracks at the N.C. Transportation Museum.
Streamliners at Spencer’s second day drew hundreds to the former Southern Railway facility to see locomotives from historic railroads around the country, along with private and historic rail cars and other artifacts.
The event continues today and Sunday at the N.C. Transportation Museum, with tickets for sale on site.
Photographers lined the tracks near the roundhouse to see engines brought out onto the turntable.
More photographers and some with video cameras lined the rails leading onto the loop of track around the museum grounds.
For David Wilson, who lives outside Boston, it’s a once-in-a-lifetime chance.
Wilson and his wife, Celeste, traveled to North Carolina after hearing about the event from a group of railroad enthusiasts back home.
“We’ve been planning the trip for a couple of months,” Wilson said.
Around his neck he wore a specially designed camera rig holding two Nikon film cameras.
Wilson explained that the cameras are set to take 3D photos. When projected side-by-side with special polarized lenses, they form a three-dimensional image, he said.
“If you’re into trains, they all have a history,” Wilson said.
For her part, Celeste said she was particular intrigued by the displays of military trains and U.S. Mail trains.
Among those on hand for the event was Elmer Lam, who served on the N.C. Transportation Museum Foundation board for 18 years, 12 of them as the board’s president.
Starting in 1990, Lam spearheaded efforts to get state and federal support to preserve the former Southern Railway facilities that are now home to the Transportation Museum.
“To be here on this day is very special,” Lam said, as he toured the grounds on a golf cart with current foundation president Steven Mersch.
Lam spoke of the transformation he’s witnessed over the decades.
Looking to the roundhouse where the historic engines were gathered, Lam said he could remember when the building was in danger of being lost.
Lam said the success of the event, and the Transportation Museum, was due to the hard work of volunteers and the support of elected officials.
“It’s a very emotional day for me,” Lam said.
“Just to see all these people, to see the parking lots full, is great,” Mersch said.
For Scott Crawford and his son, Dalton, the day was a chance to do two of Dalton’s favorite things: see trains, and ride one.
Dalton, 4, watched and waved as his father and grandparents walked between exhibits.
“This is my 10th or 11th time here,” Scott Crawford said. His mother-in-law, Mary Whelan, said she and her husband Tom had also visited the museum before.
Scott had also purchased a ticket for Friday night’s photo shoot. “We’re going to see if we can capture a few magical pictures,” Crawford said.
“It’s interesting to see them all, the colors and the lines,” Whelan said. “Not like today’s trains.”
Ashley and Tony Chicoine and son Jackson, age 2, spent much of the time not riding trains, but watching.
And in Jackson’s case, waving to them as they passed by.
The trip was a surprise for Jackson for his graduation from preschool, Ashley said.
Out by the loop of track, in the grass besides the rails, Harold Edmonson, of Chicago, looked out at a New Haven Railroad locomotive now owned by the Railroad Museum of New England’s Naugatuck Railroad.
He took off his baseball cap, with a New Haven Railroad logo, and took a picture of it with the engine in the background.
“Of course, it’s been out of existence many years,” Edmonson said of the railway. But he’s still a fan.
The event is a historic opportunity to see locomotives from many American railways gathered in one place, Edmonson said.
“You’d need hundreds of hours and hundreds of dollars to travel and get a chance to see each one around the country,” Edmonson said.
As he spoke, a three-engine group of Lackawanna Railroad engines pulled a seven-car demonstration freight train past them, around the loop.
And hundreds of cameras clicked as the historic train passed by.
Admission to Streamliners at Spencer is $35 for adults and $25 for children.
More information is available online at www.nctrans.org.