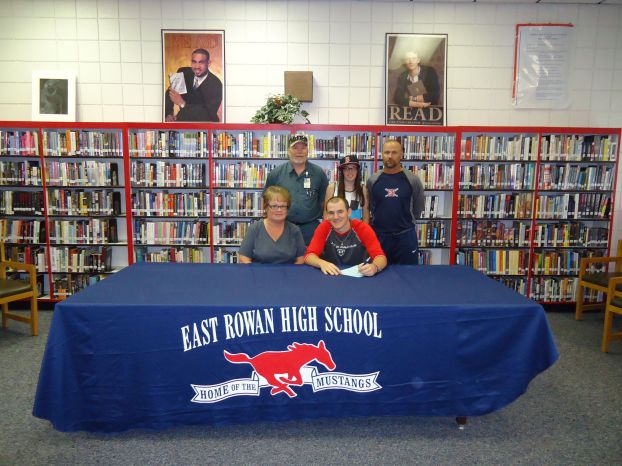 GRANITE QUARRY — East Rowan coach Brian Hightower is an authority on the baseball rulebook, but he’s somewhat less of an expert when it comes to shopping and home economics.
Hightower admitted he bought the first cake of his life on Thursday. He was amazed by his visit to Wal-Mart — you never know who yo might run into — and he was equally amazed that cakes cost $25 these days.
But he didn’t regret his adventure. The cake he selected proved tasty, and the four guys he bought it for have been worth a million bucks to East’s program.
Dustin Ritchie, Michael Caldwell, Chase Jarrett and Connor Johnson were the honorees at Thursday’s signing party in the East media center. Ritchie and Caldwell are headed for Pitt Community College in Greenville. Johnson is bound for Catawba. Jarrett is going to be near the beach at Brunswick Community College. Caldwell and Johnson you’ll be reading a lot more about in the days ahead. Jarrett you read about last fall when he committed, so we’ll turn the spotlight on Ritchie.
“Ritchie is a guy who is super-competitive,” Hightower said. “He plays the game almost like he’s ticked off. He takes every at-bat personally.”
Like Hightower, Ritchie is a little off-center. Ask him about what he’s looking forward to most about Pitt CC, and he says it’s attending East Carolina football games. East Carolina is next door to Pitt.
“I hear they do it right,” he said. “It’s going to be fun.”
East won 22 games this year and was South Piedmont Conference champion.
But in 2013, East won only 12. The Mustangs didn’t excel, mostly because they weren’t very lucky. Ritchie and Ike Freeman were sidelined for a long period, and that crippled the Mustangs.
Coming back from Tommy John surgery, Ritchie didn’t debut as the team’s designated hitter until April 4. But he hit .421 the rest of the way, including a four-game stretch in which he banged out eight hits and sparked the Mustangs to four straight North Piedmont Conference wins.
“It probably was the worst baseball season of my life because I’m not used to not playing,” Ritchie said. “Coming back from the surgery was tough, but not nearly as tough as it would’ve been if I was a pitcher. I actually was back in six months — and everything felt good.”
East was good from the start this season, tremendous up the middle for a 3A high school team with Ritchie behind the plate, Caldwell at second, Freeman at short, and Luke Setzer in center field.
At least that’s how the Mustangs lined up until Ritchie separated a shoulder on a play at the plate in the Easter tournament that East hosted. That injury forced Setzer to move to catcher and rearranged East’s outfield.
Ritchie couldn’t catch in the final weeks, although he was able to DH in the playoffs. That stint as DH included his famous walkoff squeeze bunt that won the second-round playoff game with Weddington.
“I like hitting more than anything, but it’s a lot tougher to hit as the DH than when I’m catching,” Ritchie said. “If you make an out as the DH, all you can do is sit there and think about it for three innings. If you make an out while you’re catching, catching takes your mind right off a bad at-bat.”
Ritchie said East’s pitching staff made his life easy but Ritchie also helped those pitchers out. He had a terrific senior year defensively, with just one passed ball, and he threw out nine of 12 runners who attempted to steal.
“He’s good at blocking balls and he can throw you out,” Hightower said.
At the plate, Ritchie batted .355. He was third on the team in RBIs with 16 and he led the Mustangs in doubles with eight. He hit a home run in a March game at Staton Field against Glenn.
Ritchie is tough and strong, but since he’s a 5-foot-10 catcher, he wasn’t expecting to be recruited by a lot of people. It was a pleasant surprise when Hightower informed Ritchie that Pitt was coming to look, not only at Caldwell and Johnson, but at him.
“I guess I did pretty good,” Ritchie said. “I really liked their coach (Tommy Eason) and I liked the school. It’s a great program.”
Ritchie is a good enough athlete that he’s not limited to catcher. He can fill in at first base or in left field when needed. His shoulder has healed now, so he’s able to catch, but Rowan County has already used him for a game in left field when Ryan Jones pitched. That allowed Rowan to get the bats of Ritchie, DH Riley Myers and catcher Michael Pinkston in the lineup at the same time.
Trey Holmes, an East assistant coach, had a storybook career, playing in the state championship series for East, playing in the American Legion World Series for Rowan County, playing in the junior college World Series with Pitt CC, and then going on to play on college baseball’s biggest stage with Appalachian State.
Holmes’ career was fueled by his decision to go to Pitt, and it’s certainly possible that Caldwell and Ritchie will do good things there as well.
“I know they’re gonna love Ritchie,” Hightower said. “All our guys will play hard for you, but he’s the one that’s gonna play with attitude. He plays with fire.”