Thousands expected at N.C. Transportation Museum this weekend for Streamliners at Spencer 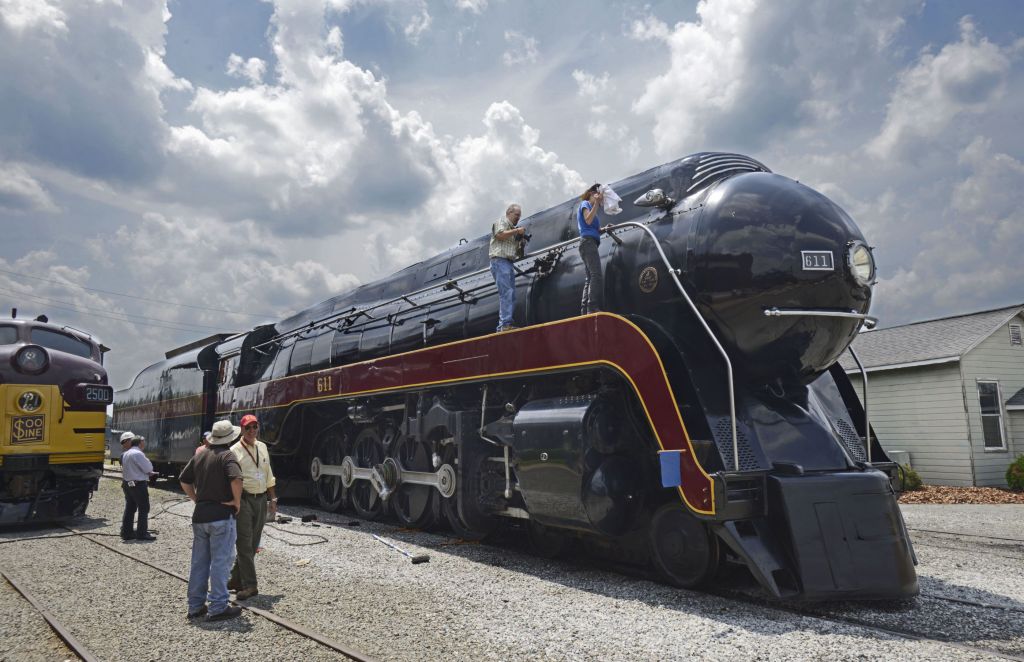 SPENCER — Twenty-six hulking, steel beasts emerging from railway history are slated as the massive centerpieces at this weekend’s Streamliners at Spencer railroad showcase at the N.C. Transportation Museum.
Beginning today and running through Sunday, the event will bring together more than two dozen restored streamliner locomotives, built between the 1930s and 1950s, to the museum in Spencer to be displayed in front of an expected crowd of about 5,000 people.
Organizers called the historic event “rail fan nirvana.”
In regard to pre-sale tickets, the event has drawn expected attendees from 41 states, the District of Columbia and five different countries, including Canada, Ecuador, Japan, England and Australia.
“These are 26 vintage locomotives, and there is a rainbow of stuff going on this weekend,” said Mark Brown, the museum’s spokesman. “As far as we can tell, and we’ll let anybody prove us wrong if they want to, this is the largest gathering of these historic locomotives that has taken place.”
All the county’s hotels have filled up, Brown said, and participants eager to get up close to the multi-ton engines are spilling over into hotels in Cabarrus and Davidson counties.
In addition to being able to take pictures of each locomotive at the center of the museum’s turntable, attendees also will be able to enjoy train rides pulled by the vintage engines and take cab tours of select locomotives.
A unique class of extremely rare locomotives is on the roster, Brown said.
Known as The Spirit of Roanoke, the iconic Class J Norfolk and Western Railway 611 Steam Passenger Locomotive is the only steam-powered Streamliner engine scheduled to appear.
Scott Lindsay, president of Steam Operations Corporation, oversees the 611 as chief mechanical officer.
“Back in the day, these ran at 110 miles per hour. People talk about high-speed rail all the time, and it gets irritating,” Lindsay said. “You tell people that steam was running over 100 miles an hour in the 1920s and 30s, they look at you like a Krispy Kreme donut. They’re glazed. That’s the problem. We are reinventing the wheel all the time instead of recognizing our history and understanding this (engine) can help engineering and business students move forward.”
The FT No. 103 Demonstrator, considered the “father figure” to all diesel Streamliner locomotives, is making an appearance as well.
Brown said the unit was created to convince business and corporate leaders diesel engines were the future of rail travel.
“When Electro Motive Company, which eventually became Electro Motive Division of General Motors, introduced this four-unit mixture of diesel freight locomotives in 1939, it became known as The Diesel that Did It – the diesel that killed steam locomotives,” Brown said.
The Burlington Route E5 No. 9911a Silver Pilot comes from the collection of the Illinois Railway Museum.
“The 1940 E5 was one of 11 cab units of its type built in 1940 and is the only one remaining in the world,” Brown said.
Streamliners at Spencer is an event where people can only see “this collection of locomotives altogether in one spot here for the next four days.”
“It’s unlikely to happen again with this grouping of locomotives again. It’s such a massive event to put on,” Brown said.
Planning for the event began a year ago, Brown said, and locomotives came from as far as Portland, Ore.
“The event is important for several reasons. You are bringing together 26 locomotives, each with a specific history,” Brown said. “One of them went from the windy city of Chicago to operating on a run in Arizona where they were going out to an Indian casino and then made it back to Illinois and is now here in Spencer. You have all these little stories coming together, and there is an insane amount of history there.”
The N.C. Transportation Museum provides a perfect venue for hosting an event the magnitude of Streamliners at Spencer, Brown said.
“We’re doing the official Polar Express coming up this Christmas,” Brown said. “At other sites, it has been a massive event on a huge scale.”
Night photo shoots will be held tonight through Saturday at $25 per night.
The night photo shoots will feature special lighting, special pairings and set up with the attending locomotives in recreations of historic trains.
“This whole weekend is really about partnership. It’s about partnering with major railroads, like Norfolk Southern and Union Pacific, as well as all the museums that have brought their locomotives here,” said Steve Mersch, president of the N.C. Transportation Museum Board of Directors. “This event is for rail fans. At the museum, we try to cater to everybody – kids, rail fans, car enthusiasts, airplane enthusiasts, but this weekend is a special rail fan event.”
For more information on Streamliners at Spencer, visit www.nctrans.org or call 704-636-2889. The N.C. Transportation Museum is at 411 S. Salisbury Ave. in Spencer.