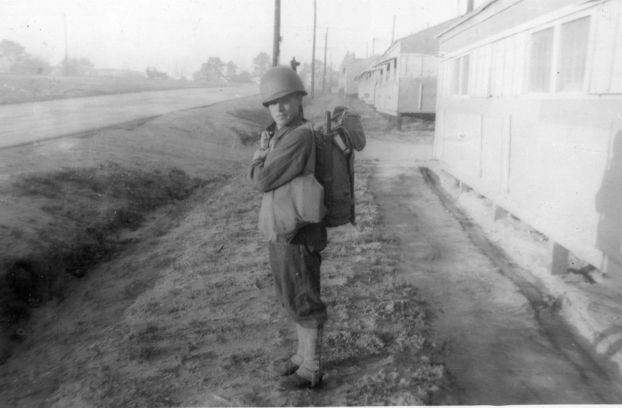 Wineka column: POW Shorty Yost coped with war on his own terms

SALISBURY — Carl Lee “Shorty” Yost loved to drive tractors, tend to his vegetable gardens, cut wood and teach his grandchildren how to drive.
Shorty came by his nickname honestly. He was 5 feet, 3 inches tall and weighed about 135 pounds. He spent a career working at bottling plants for Nehi, Coca-Cola and Cheerwine, and he was married for years to Maisy Safrit Yost, who just happened to be 5 feet, 2 inches.
But one thing Shorty Yost seldom talked about with his wife or daughters Dianne Greene and Tammy Petrea was his experience as a German-held prisoner during World War II.
As the years have passed since Shorty’s death Nov. 12, 1995, his family has probably pieced together more information about his war years and their lasting effect on Shorty than they ever knew during his life.
And it’s still not much.
But they think they understand why Yost was a heavy drinker, why he had two nervous breakdowns, why he would never own or touch a gun and maybe even why he needed three hip replacements.
Yost was one of those guys who came out of the war with post-traumatic stress disorder before folks really had a name and initials for it.
His doctors and family urged him to see a psychiatrist. He went one time, and that was it.
“Don’t ever take me back to that man again,” he said.
Dianne and Tammy think it was fellow prisoner of war Harvey Edward Bogle, also a Rowan Countian, who came up to them at Shorty’s funeral and asked whether they knew why their father had to have three hip replacements.
It was all the forced marching, carrying the Germans’ equipment, as he was moved between prison camps in Italy and Germany, Bogle explained.
Living only miles apart, Bogle and Yost had communicated with each other regularly over the years after the war.
“We didn’t know it,” Dianne Greene says.

ggg
In all, the Germans held Yost prisoner for exactly 11 months, before he was rescued by an American reconnaissance unit on March 13, 1945.
A German dog tag issued to him as a POW identified his place of imprisonment as Stalag VII-A, but that’s more likely the German Military District POW camp in Moosburg where Yost was taken first before being shipped out to another stalag.
Stalags were POW camps for enlisted personnel. His German-issued identification number was “131580.”
Yost tried for many years after the war — and he was rejected time after time — to receive benefits earmarked by the federal government for former prisoners of war.
His application for those benefits says one of his places of confinement was Stalag VII-B, which was located in Memmingen, Germany.
“He was a real hero,” says son-in-law James Greene, one of the few people Shorty would talk with about the war. “I was with him a lot, but I would always have to bring it up.
“He looked at it as though it was no big deal.”
Dianne Greene says it was the way her father always was about his wartime service.
“That was what he was supposed to do,” she says of the way Shorty looked at things.
ggg
Yost told Greene he was one of five or six Army soldiers on a patrol team in Italy in 1944 when they were surrounded by Germans.
Before taken captive, the men tried to destroy their weapons. Yost’s application form for the POW benefits says he was taken prisoner April 13, 1944, south of Naples.
Back home, the news wasn’t good for Shorty’s family. The first report about Yost in the Salisbury Evening Post came June 11, 1944, and it said the 22-year-old Rowan County man was missing in action, according to a message the family received from the adjutant general’s office.
The next newspaper report about Yost came June 27, 1944, and it said an intercepted shortwave broadcast from Germany had listed Yost as a prisoner of war.
But that status wasn’t verified until an Oct. 27, 1944, report in which Yost and fellow Rowan Countian Luther Canup were confirmed as POWs in the War Department’s official list.
Yost told James Greene his experience in the German POW camp was not a bad one. He and other prisoners worked on a potato farm, raising the raw materials used in the production of fuel for German planes.
Yost referred to the guards at his camp as the “old Germans,” Greene says. Yost also credited the POW camp for teaching him how to cook — especially how to prepare potatoes.
ggg
The only thing Yost had in his possession after being liberated was a pocket watch, a keepsake the family still has. Yost never told anyone how he came into possession of the watch, and jewelers have been stumped about its origins.
Yost entered the Army on Oct. 13, 1942, He was shipped overseas in January 1943 and was part of Army campaigns through Africa, Sicily and Italy.
“He talked quite a bit about Africa,” says James Greene (who is not the James Greene now running for county commissioner).
Shorty Yost was one of six brothers. Marvin and Fred Yost are still living. Shorty attended Granite Quarry schools and St. Paul’s Lutheran Church as a youngster. Before entering the war, he worked for a textile mill.
When Dianne and Tammy hold up their father’s Army uniform today, they’re reminded of how wiry and tough their father must have been.
Shorty met Maisy when he took his Army uniform to be cleaned at Odell Cleaners right after the war. Maisy is now 88 and living at the Carillon assisted living facility in Salisbury.
During his life, Shorty Yost never received the recognition he probably deserved, and the same is true, of course, for many of his generation, now gone.
In today’s world, Yost had the wartime credentials to be grand marshal of a parade, James Greene says. But the family knows it never could have happened.
“He wouldn’t have done it,” Tammy says. “He didn’t like crowds.”
The family received a beautiful certificate from President Clinton after Shorty’s death, in appreciation of his service to the country. It’s in a handsome frame.
Dianne and Tammy also have all of Shorty’s photographs from the war, a medal he received, the paperwork he left behind and the three shell casings and folded American flag from his funeral.
“He was a brave little man,” James Greene says. “He wasn’t scared of anything.”

A motorcyclist was seriously injured Saturday when he was struck by a car that crossed the center line, throwing him... read more