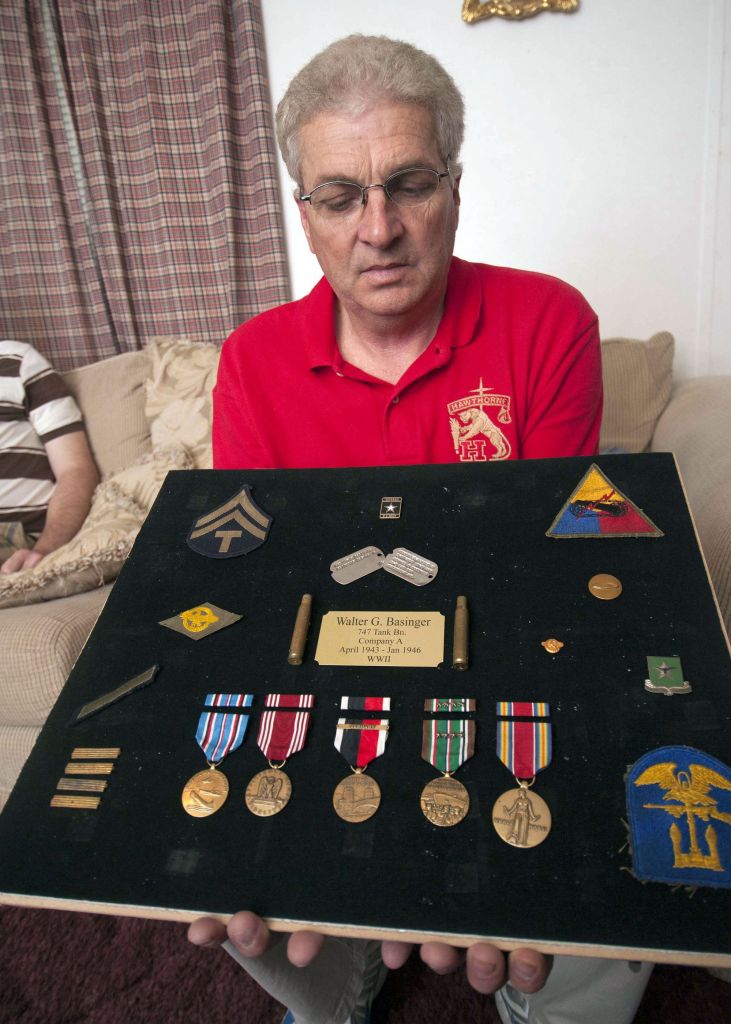 Ricky Basinger has researched his family’s history for over three decades, and he knows their roots are deep in Rowan County. So it seems there wouldn’t be much left for him to learn, especially about his own father.

But he did discover something fairly recently about his dad, Walter George Basinger.

In December, after asking the U.S. Army in 2011 for history related to his father’s World War II service, Basinger found out that Walter Basinger was due two medals he never received: the European Medal with four bronze stars and the German Occupation Medal.

The bronze stars are for four European campaigns: Northern France, Central Europe, Rhineland, and the one his father took part in but was not recognized for, Normandy.

In January, Basinger finally got those medals for his father, who died 20 years ago.

“It’s heartbreaking to me that my dad never knew he was awarded those medals,” he said.

Basinger has mounted those medals, along with others the Army awarded his father, in a shadowbox with Walter Basinger’s dog tags, uniform pins and patches, and shells from the rifle salute at his funeral. He also has a scrapbook with documents related to his father’s 1943-1946 military service and letters he wrote, as well as a map showing the path his father’s unit took through Europe that has fellow soldiers’ names and addresses handwritten on the back.

It’s all a memorial to a man Basinger deeply reveres.

Walter Basinger turned 18 in January 1943 and was inducted into the Army two months later.

“He was in the cotton mill to begin with, then Uncle Sam said, ‘You’re going to work for me,’ “ Basinger said.

He learned some fast lessons about the Army, including what happens when you raise your hand. He told his children and grandchildren a story about boot camp, when the men in his unit were asked if any of them could drive a truck. Several said they could, including the young Walter Basinger.

They were told their trucks were parked behind the barracks. When they got there, they found wheelbarrows.

“He said after that, he never volunteered for anything else,” Basinger said.

He also told a story his grandson, Daniel Basinger, recalled about tank training at Fort Knox, and somehow getting his tank off the base and driving it through a farmer’s barn.

“The Army had to go back and build that guy a better barn,” Daniel Basinger said.

Those were the kind of stories his father liked to tell, Basinger said. He didn’t like to talk about combat or the horrors of war.

“He was like a lot of the other veterans,” Basinger said. “He wouldn’t say anything.”

The war affected their family before Walter Basinger even got to Europe.

Walter Basinger served in the 747th Tank Battalion. His brother LeeRoy was in the 314th Infantry Regiment. He took part in the Normandy invasion that began with D-Day on June 6, 1944, but was killed on June 23, two days after his 23rd birthday.

Walter Basinger was waiting to be shipped out at the time, and the Army didn’t let those soldiers have contact with the outside world, fearing information would get out be obtained by the Germans.

“My dad didn’t anything about it for two months,” Basinger said of his uncle’s death.

In Europe, Walter Basinger’s unit fought its way toward Germany. He did tell stories about how the soldiers were treated in Paris and some of the places they saw. He talked about being confined to the tank, how cold it was and how little they had to eat.

But again, there were some things he simply wouldn’t talk about.

In July 1945, the Army changed the 747th to an amphibious tank battalion and planned to ship its soldiers to Okinawa, but the war ended before that happened. In 1946, Walter Basinger was discharged and he returned the mill in Kannapolis. He worked there until 1987.

Ricky Basinger — with help, he says, from the Rowan Public Library’s history room — has traced his family’s history to the 1700s, and found them in Rowan County then, he said. His great grandfather, Adam Basinger, was a guard at the Confederate prison in Salisbury until being taken prisoner April 12, 1865, and sent to Camp Chase, Ohio.

Basinger got the government to provide a military marker that he and son Daniel placed on Adam Basinger’s grave at the Shiloh Reformed Church cemetery in Faith.

Basinger says he’s closing in on 35 years of researching family history and has vowed to quit at that time. He’s not sure he really will, but whether he does or not, he’s proud to have gotten his father the recognition he deserved, not that it makes any difference in his eyes.

“I had the most respect for my dad until the day he died,” Basinger said. “To me, he was a four-star general.?