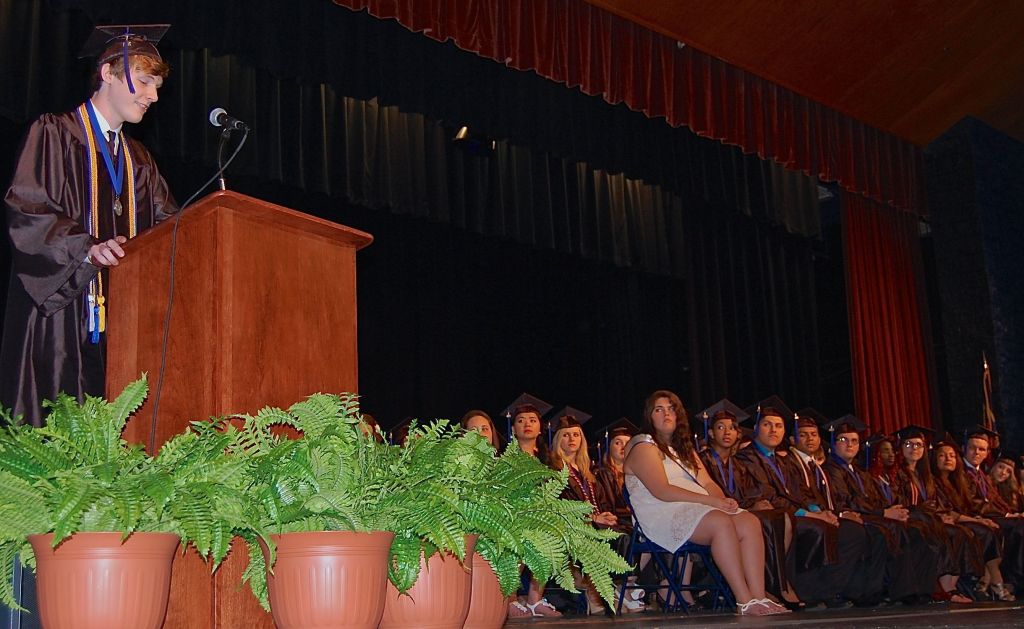 Hugs, laughter, smiles and tears abounded Friday night as friends, families and graduates celebrated the accomplishments of the Rowan County Early College’s third graduating class.
“It’s exciting, but it’s also kind of scary because of college,” said Amber Allman of Salisbury.
“I think we’re a lot better prepared to go out in the world now,” she added.
The school’s 50 graduates completed more than 3,300 hours of college credit during their four years at the early college.
The average number of early college graduates who receive their associate’s degree is less than 40 percent at other schools.
Ninety percent of the students received their associate’s of arts degree, and 10 of those also received their associate’s of science degree. Forty-five of the students are continuing their college education in the fall.
The students have reported $124,000 scholarships received.
Allman said she chose Rowan County Early College because she wanted to be different.
“I wanted to excel. I knew this school had the most opportunities,” she said.
Allman received associate’s degrees in arts and science and plans to pursue her creative writing degree at the University of North Carolina at Wilmington in the fall.
Because of her classwork at the early college, Allman will be able to finish her bachelor’s degree in two years. She plans to pursue a master’s degree after completing her bachelor’s degree.
Jayln McCombs of Salisbury received his bachelor’s of arts degree.
“It hasn’t hit me yet,” he said, but added that his school years “flew.”
While many of McComb’s classmates were encouraged to attend the early college by their parents, he said attending the alternative school was his own decision because he wanted “better opportunities to get a head start on life.”
McCombs will be joining the Air Force.
Throughout program, the theme of perseverance resurfaced time and time and time again.
“Life is a constant pursuit,” Principal David Miller told the graduates. “Don’t be afraid. Don’t be afraid to fail.”
He later quoted Nelson Mandela, saying, “It always seems impossible until it is done.”
“This stage is done,” he told the graduates, congratulating them for making it through high school.
“It seems our mind is ambitious, but our body is weak,” said salutatorian Hunter McIntyre as he addressed his classmates, adding that each one of them wants to achieve something more despite the distractions of everyday life.
“We’ve already achieved greatly by graduating high school with a college education,” he said.
Valedictorian David Pryor encouraged his fellow graduates to search for the things they love and to learn about them and pursue them.
“Do not compare yourself to anyone else in this world,” he said, adding that by doing so, you insult yourself because “you are unique.”
“Don’t ever forget that many people believe in you,” said Superintendent Dr. Lynn Moody, adding that many of those people were in the room to watch the students graduate.