Battle of the Philippine Sea, a deadly encounter 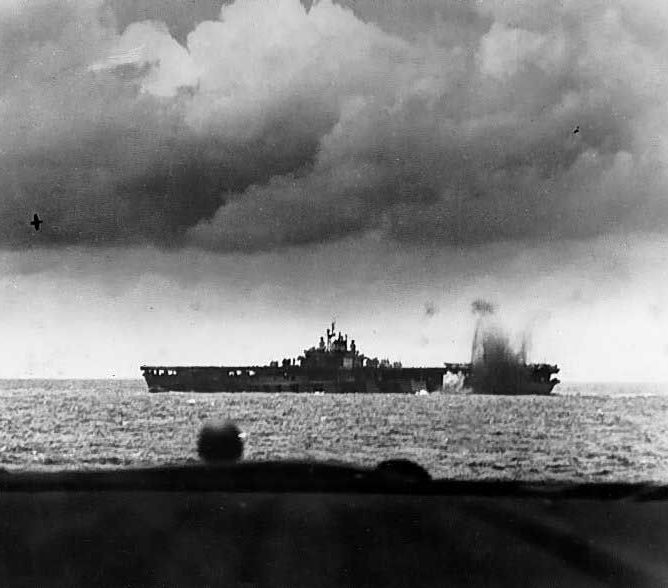 Considered by many to be the greatest carrier battle of the war, the battle of the Philippine Sea from June 19-20, 1944, brought the mighty U.S. 5th Fleet with 15 carriers and the Japanese Combined Fleet with nine carriers into a fierce and deadly encounter. It accompanied the U.S. landing on Saipan in the Mariana Islands. During the two-day battle, 130 U.S. aircraft were lost and several ships damaged. The U.S. had 891 aircraft to the Japanese force’s 430 and the U.S. had 69 destroyers, 21 cruisers and seven battleships to the enemy 28 destroyers, 13 cruisers and five battleships. Although many U.S. ships were used in the battle, each with their own battle history, the USS Enterprise was later recognized as the most decorated ship of the Second World War. This battle would later also be knows as the “Marianas Turkey Shoot” as the U.S. decimated the Japanese.
The Marianas Islands were vital to Japan for air bases on Saipan, Tinian and Guam. Many of the Japanese planes came from Guam but fewer returned under the long and powerful arm of the U.S. 5th Fleet. The Japanese command knew their forces would suffer from a deficit in carrier air power so the Japanese admiral planned to use his aircraft to keep the U.S. out of range of a counterstrike, but that proved a disaster by superior U.S. air and naval power. U.S. submarines Albacore and Cavalla also proved superior as they sank the carrier Taiho and Shokaku (used on Pearl Harbor) with a single torpedo as the American pilots sank the carrier Hiyo.
Several hundred Japanese aircraft were picked up by radar 100 miles away when general quarters sounded on the USS Cabot at 0800 hours. Only 11 U.S. planes were launched because eight more were still being repaired or refueled. U.S. airpower from the Cabot and others was unstoppable on June 19, having shot down 395 Japanese aircraft while only losing 20 U.S. aircraft. The Japanese fleet was 800 miles away when the U.S. 5th Fleet took off after the enemy and made quick to reduce the distance down to 400 miles. This made air attack easier because of the refueling. The first assault was made up of 204 aircraft off various U.S. carriers. Many aircraft were held in reserve for fear of a Japanese counter strike or an air attack from one of the Japanese-controlled islands. Seventy aircraft had to be ditched in the ocean because of lack of fuel to circle before landing. Forty-nine pilots and air crewmen did not return.
This massive two-day attack had been the largest carrier verses carrier in history and was to be the last carrier battle. By delivering the defeating blow to the Japanese, this meant that American bombers could now reach Japan itself and Japanese aircraft could never attack the American fleet with any force. It was, by all means, a huge victory for the U.S. and helped with the quest to end the war.
What heroes all these guys were, facing danger from air and sea and nowhere to go except to fight it out like rockum-sockum robots. Navy personnel and pilots, in my opinion, did not get enough recognition for their heroism as only few were singled out. Confined to a ship, no matter how large, one has to have an escape route, but when the entire ship is under attack, where does one go? The horror had to be unimaginable. As for the pilots under attack, I can only say to imagine you are on a riding lawn mower with the same size seat as a pilot sits on, when suddenly someone pulls up beside you while mowing and opens fire on you with an AK47 assault weapon. You now have the same option as the pilot, and that isn’t much. Having said that, maybe now you can recognize the heroes they were. The more we understand and put this into perspective, I feel the more we could appreciate what the military does for us and why we need to remember them always.

Rodney Cress is a Vietnam veteran and longtime advocate on veterans issues. Look for future articles about other “forgotten battles” of World War II.